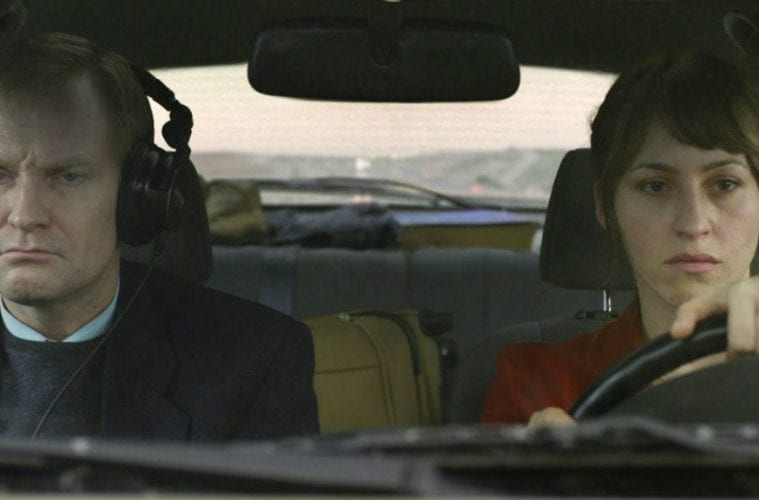 Review: This year’s Oscar shorts, with a mixture of fun and grace, get a full run at Landmark 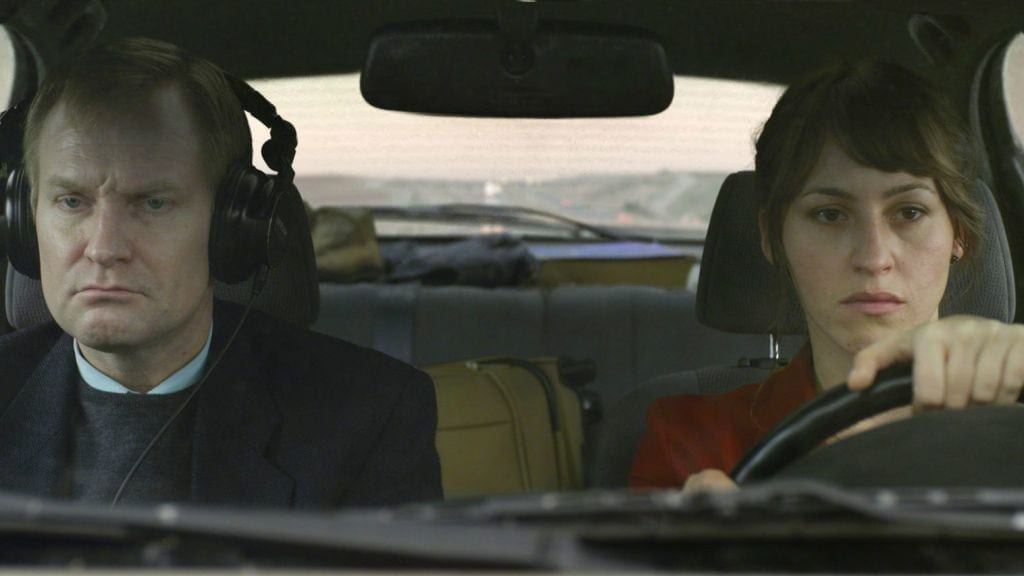 Sarah Adler and Ulrich Thomsen in the Oscar-nominated short Aya.

Three of this year’s five Oscar-nominated live-action shorts center on the chance meeting of strangers, and the grace notes that can result. They’re lovely and moving in different ways.

Technically, The Phone Call’s costars, Sally Hawkins and Jim Broadbent, don’t meet. We never even see Broadbent, and neither does Hawkins. Her character, Heather, encounters his voice at the end of the line when he calls into the crisis center where she volunteers. He’s depressed, mourning the death of his wife two years ago, and he says exactly what she doesn’t want to hear: “It’s too late now.”

Yes, he has taken steps to end his own life. Much of the film’s brisk 20 minutes is Heather’s attempt to connect with this fellow, Stanley, and to try get him to spill some personal details that would let her send medical help to his home before it truly is too late. The movie is marred by a limp ending and a grating pop song played over its final moments. But Hawkins (Happy-Go-Lucky, Blue Jasmine) is one of the screen’s most emotionally precise, delicate actors, her face a canvas of bittersweet emotion. 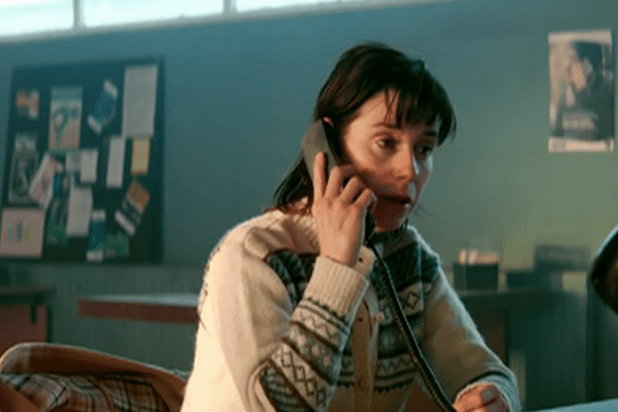 Sally Hawkins in The Phone Call.

The meeting in Aya is in-person and very quirky. The young Israeli woman of the title (Sarah Adler) is waiting to greet a friend arriving at the airport. Instead, through happenstance, she picks up a Danish music historian, Mr. Overby (the always terrific Ulrich Thomsen).

He thinks she’s the volunteer driver sent by organizers of a musical competition he’s come to judge. She doesn’t disabuse him of the error for a long portion of the drive, which can sometimes feel like a screwball comedy infused with uneasy emotional undertones. As you’d expect, the point of this two-person drama is the chance to see them open up and communicate, and they do in unexpected ways.

When we first see Aya at the airport, she’s on her phone, on robo-hold, waiting to talk to an actual person. It’s a slightly obvious but apt metaphor for the character’s difficulty in making connections. Revealing some unexpected information at the end, Aya maintains the elusiveness of a good short story by a writer who knows better than to neatly tie up all the threads.

In Parvaneh, the title character (Nissa Kashani) is a teenage Afghan girl, living illegally in Switzerland and trying to send some money back home to her family. Because she lacks valid ID, her journey to a Western Union in Zurich proves fruitless — until she meets a punk girl on the street, who agrees to send the money in Parvaneh’s stead, for a price. Writer-director Talkhon Hamzavi’s movie fulfills some of your expectations, but she keeps a few surprises in store in a movie that’s both a delicate and robust story of girl power and reaching out across cultures.

Director Hu Wei’s Butter Lamp (La Lampe au Beurre de Yak) is a wonderful oddity. For 15 minutes, groups of Tibetan nomads pose in front of large backdrops (the Great Wall of China, Disneyland). Many of them have never had their photo taken before. Through offhand dialogue between the subjects and the photographer, the film reveals the transitional nature of a culture poised between tradition and the new. And it features a (literal) final reveal that’s breathtaking. 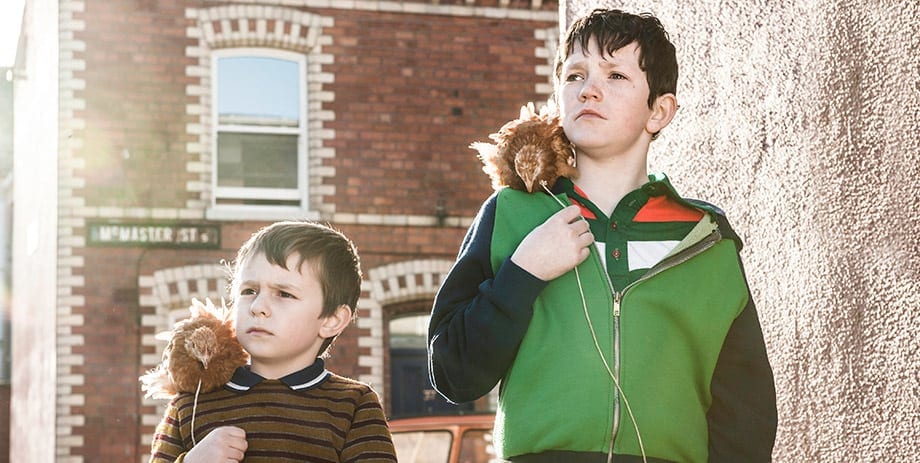 The Irish film Boogaloo and Graham.

Typically, the Oscar selection includes a scrappy little comedy featuring kids. This year’s is Boogaloo and Graham. It’s the tale of two Irish brothers raising two chickens (the birds’ names give the movie its title). Their mum isn’t happy with the situation. Their dad, though, proves to be a pal who will do what he can to keep the fowls out of the stewpot. The movie is little more than a good-natured sketch, but it doesn’t wear out its welcome.

In the animated bill, two movies stand out for me. The Dam Keeper refers to a lonely little pig, orphaned but responsible for keeping his mittel-European town safe from “an ocean of ash” by winding up the windmill he’s inherited and blowing the pollution away. Despite the importance of this job, he’s ostracized and bullied at school by all his animal classmates — until, that is, a new kid arrives, a fox. A talented artist who thrills the other kids with his quick-draw sketches of their teachers, the fox upends the status quo by befriending the pig. Or does he? Nearly wordless, this tale of friendship found then possibly lost is vibrantly animated in pastel tones that contrast nicely with the sometimes sorrowful mood.

The Bigger Picture dives into the heart of a crisis many of us middle-agers are facing — the decline and death of a parent. Two adult brothers are caring for their mum. One is faithful, dogged and overlooked while his dashing, irresponsible sibling gets attention he doesn’t really deserve. Strikingly animated with a mix of stop-motion and two-dimensional painting, the film’s hard-won victory is showing that the bond of brotherhood trumps sibling rivalry in trying times. 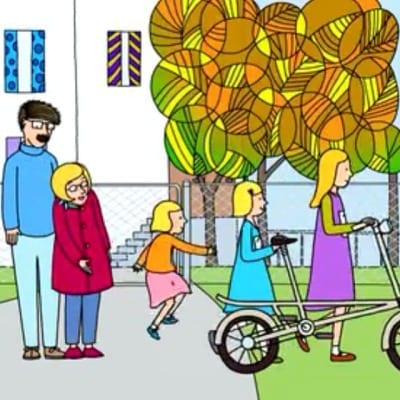 The animated short Me and My Moulton

Me and My Moulton is a lightweight, amusing memory of a Norwegian girl (one of three sisters) remembering the spring and summer of 1965. The girls want a bike, but their iconoclastic parents can’t do something as easy as just going to the local store and buying one. They have to special-order one from England. The movie captures that queasy time when you realize, as a kid, that your parents are a little weird. (Dad sports the only mustache in their small town!) And it’s about the ways children sometimes conspire to be as kind to their parents as their parents are to them.

The two-minute lark A Single Life introduces a young woman to a catchy-sounding 45 that turns her record player into a time machine. The Disney entry, Feast, is, well, an ultimately conservative celebration of a dog and the things it gets to eat, thanks to its indulgent owners. It’s animation as pure product — as unhealthy as the junk food it celebrates. It will probably win the Oscar.