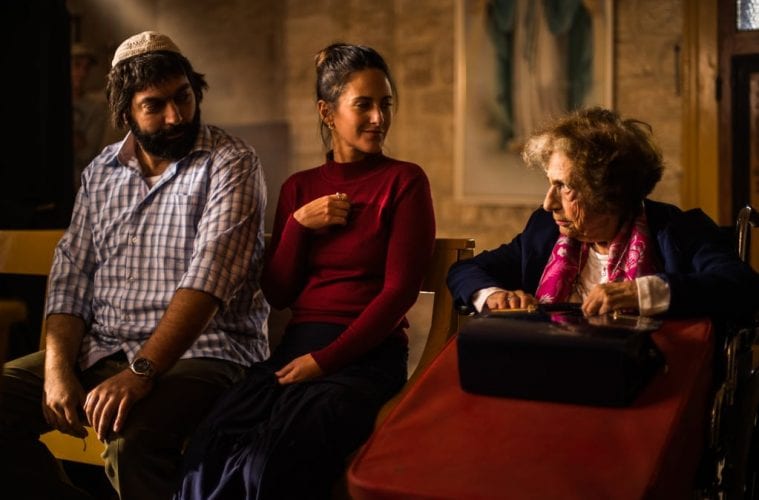 Review: Always fascinating Oscar shorts return to Landmark with a potpourri of styles and subjects The Oscar-nominated Ave Maria explores the clash of cultures when a Jewish family crashes their car into a Catholic convent.

A yearly delight returns to Landmark Midtown Art Cinema with the two roundup programs of the short films nominated for Oscars in the animated and live action categories. As always, the movies from filmmakers around the world are a showcase in diversity — in terms of subject matter, tone and directorial approach.

The inevitable Pixar offering on the animated bill is Sanjay’s Super Team, a completely charming and completely forgettable entry. It’s animator Sanjay Patel’s CGI memory of being torn as an Indian kid between his love for Saturday morning superhero cartoons and the quiet worship rituals of his father. So, when the boy steels himself to kneel at the living room altar, he fantasizes the Hindu gods enacting the manic derring-do of his cartoon idols. Sweet but slight.

In contrast to Team’s semi-realistic computer graphics, Don Hertzfeldt’s World of Tomorrow is animated in a hyper-naïve, stick-figure style. An adorable toddler named Emily is visited by a phantom from the future — herself, or, rather, a third-generation clone of herself who arrives to reveal the futuristic, lonely life she has in store.

“I am very proud of my sadness because it means I am more alive,” she says. Meanwhile, young Emily, in true toddler fashion, happily blurts out things like, “I had lunch today,” impervious to the gloom of her older self. (By the end, I got the sense that Future Emily mainly wants to meet with Emily Prime because she’s desperate to talk to anyone.)  Sadly delightful, if that makes sense, World is probably too smart and weird for Oscar voters to get behind.

Bear Story is more up their alley. The CGI, dialogue-free entry from Chile centers on a sad bear who presents the story of his life via a tiny traveling theater, featuring wind-up, clockwork toys that recount the story of animals captured to perform in the circus. It’s visually lovely, but awfully twee.

The two-dimensional, hand-animated We Can’t Live Without Cosmos is a stellar tale of bromance, chronicling the unbreakable bond of two cosmonauts who train, play and sleep together (in separate beds, of course — this is a Russian film). When only one member of the corps can be chosen to fly into space, nothing close to competition erupts between the pair, just an ongoing bond that’s literally deathless. It’s a lovely little fable.

A far remove from this sort of brotherly love, the stunningly hand-drawn Prologue depicts the gruesome clash between two Spartan and two Athenian warriors, a couple of them buck naked. It’s a knowing, weary look at the bloody futility of war, as witnessed by the women and children left to clean up the men’s mess. The nudity and gore — including a nasty groin stabbing — make this short the only one that’s not suited for young kids.

On the live-action slate, Ave Maria finds warm humor in religious diversity. In the West Bank, a Jewish family’s car breaks down on a desert road just outside a Catholic convent. The nuns agree to help out — but they follow a vow of silence and because it is the Sabbath, the Jews can’t use the telephone. The setup is a great one for physical comedy, but the follow-through is only mildly amusing. Still, seeing two groups from different religious background finding a way to get along is uplifting in our fraught era.

Jamie Donoughue’s Shok represents a sub-genre almost always included in the nominated live action category: a tale of imperiled children trapped in a war zone. In this case, it’s Kosovo, 1998. While the two schoolboys we meet only want to earn enough money to buy bicycles, the streets of their town are increasingly overrun with Serbian soldiers carrying rifles and harassing anyone they suspect of being Albanian. Well-made but designed almost entirely as an act of emotional manipulation, the movie celebrates the bond of friendship, only to depict its destruction by a callous adult world.

In the German-Austrian Everything Will Be OK, a divorced dad named Michael (Simon Schwarz) picks up his young daughter, Lea (Julia Pointner), for a day’s outing. If you don’t gauge the level of post-marital hostility in the way Michael doesn’t even look at his ex-wife, check out how eagerly he springs for a big, pricy present at the toy store after Lea says, “Mom would never buy that.”

The latent tension quietly starts to escalate as the father-daughter excursion takes some odd detours. Even a harmless action like posing for pictures at a photo booth assumes ominous resonance. Director Patrick Vollrath pieces his film together one detail at a time, and you start to understand exactly what’s going on just a few beats ahead of the increasingly wary Lea (young actor Pointner gives a lovely, natural performance opposite the terrific Schwarz). Emotionally harrowing, this is probably my favorite of the live action bill.

Stutterer, from the U.K., takes us into the main character’s head. Literally. We hear, in voiceover, all of the things the tongue-tied Greenwood (Matthew Needham) is thinking but can’t manage to say. It’s a great way to convey the frustrations of a smart, articulate person who can’t get all the words in his head out through his mouth. That’s an especial problem when his longtime, long-distance Facebook pal, Ellie (Chloe Pirrie) announces she’s in London for a few days and would love to finally meet him in person. Writer-director Benjamin Cleary captures the agony of the situation, and gives us an ending that’s both satisfying and somewhat weakened by an all-too-convenient O. Henry-style twist.

Finally, the U.S. entry Day One presents us with probably the worst first day of a new job, ever. Layla Alizada plays Feda, an Arabic interpreter working with the U.S. Army in Afghanistan. After getting yelled at by a male soldier, embarrassed to walk in on her while she’s showering back at the base, things only go downhill.

Assigned to accompany the same soldier as they search for the home of a suspected bomb-maker, Feda finds herself forced into the role of amateur physician when they encounter a pregnant woman undergoing a badly compromised labor. (Men, you see, are forbidden to be in the same room as the mother-to-be.) The film is suspenseful, and likely to make you flinch. It’s based on director Henry Hughes’ personal experiences while working with U.S. forces in 2009.