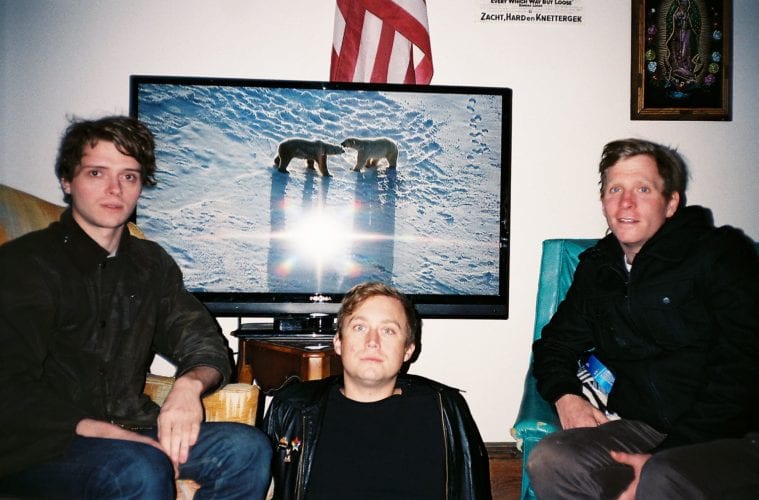 As Atlanta-based Omni’s inaugural installment, Deluxe, kicks off, it is far from transcendent. It channels the post-punk sentiment that we, humans, are in fact here. We are not transported to some eternal realm.

Philip Frobos’ lyrics are a juxtaposition of everyday realities with the ever looming inevitability  of death. The afterlife is what Frobos is contemplating. In “Afterlife,” he claims, “I’ve been feeling a lot more steady now that I know my death.” In a perfectly allegorical short time span to life, the first track ends. Consistently, Frobos’ vocal range stays comfortably within a few notes as the guitars wander up and down. Somehow, though, his simplicity is never a deterrent. “Eyes on the Floor” has one of the more catchy choruses and melodic guitar parts on the album. Its verses are a wandering foray of exploration on the guitar with the minimalist pocketed vocals of Frobos. But when the chorus comes in, the vocals rise to new heights. Its lyrics present a paradox:  “eyes on the floor where you want them to be.” In a way, Omni captures the essence of our current generation: subtly beautiful music cluttered with insecurity and dissension. But somehow, what we “want is nothing at all.”

Omni manages to show remarkable control and maturity in their ability to use minimal overdubs of piano, synths, or even guitars throughout Deluxe, emulating Television but without harmonies and traditional guitar solos.

Imagine a robot dance party: everything in Deluxe feels linear and mechanical, from the broken beat of the drums to the clean, unaffected sound of the bass and guitar. Broyles’ licks and scalar explorations are minimally altered.

Songs like “Siam” and “Plane” have some of those rock moments that confused and anxiety driven millennials can’t avoid loving. They are powerhouses of jangly, wandering guitars that are conglomerated with powerful drum parts.

Based on the lyrics and realness of Deluxe, these guys are someone you might want to invite over to help you polish off a bottle of bourbon. Formerly, Frankie Broyles’ work with Atlanta-based Deerhunter was raunchier garage rock. Likewise, Frobos and drummer Billy Mitchell participated in the lo-fi surf-punk band, Carnivores, whose fun and irreverent feeling of the B-52s carries on here. These are real good time dudes. Consider then that the majority of their tunes mention death, afterlife, dying, suffering, or anxiety. Upon closer inspection there is depth. There is conflict. There are real Atlantans that feel it is “too late now.”

Omni’s arrangements are believable and concise. Each song sounds like a band that is actually performing. Deluxe’s recordings and the sonic living room it creates are visceral and tenable.

And again as the allegorical brevity of life is reconciled with, the closing track, “78,” ends as if someone walked into the studio and insisted the band stop at that moment. Suddenness and urgency are a common component in punk related genres, but the afterlife is the ever present plunger that pushes us through life’s gutter. You can see Omni perform this Friday, August 26 at the Earl.