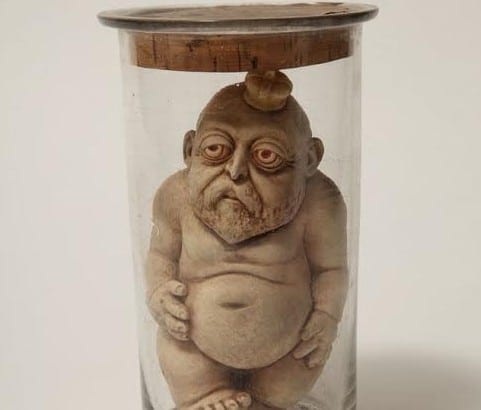 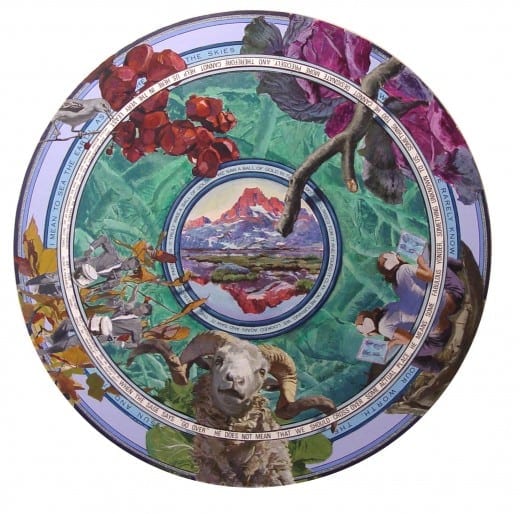 The Sorrow of Too Many Joys: Satire in 19th Century France, curated by OUMA collections manager John Daniel Tilford, is an engaging historical survey inspired directly by the assassination of journalists at the Paris office of Charlie Hebdo.

Dreams, Discord, and Desire, curated by OUMA director Elizabeth H. Peterson, is a smaller survey of recent work by Nathan Lewis. The Connecticut-based, California-born painter is best described as an over-the-top allegorist, rarely content with one allusion or symbol when two or more can be combined. 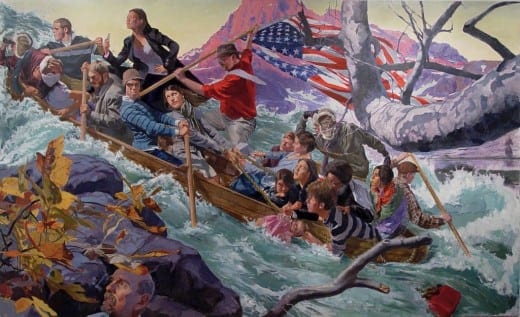 Nathan Lewis: Till We Find the Blessed Isles Where Our Friends Are Dwelling, 2008, acrylic on canvas. Courtesy Fernando Luis Alvarez Gallery.

His chef d’oeuvre is a multicultural reinvention of Emanuel Leutze’s Washington Crossing the Delaware (1851). He has replaced the revolutionary soldiers in the boat with an astonishingly diverse crew. The commander is a young woman of Asian ethnicity, who also appears in the rear of the boat as a child clutching a doll. She holds aloft a miniature oil derrick, echoing the symbol of an emergency gasoline container being towed behind the boat. A man beside her holds a tattered, upside-down American flag, a standard distress signal. 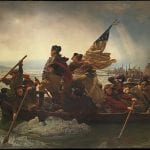 Titled Till We Find the Blessed Isles Where Our Friends Are Dwelling (a phrase from Nietzsche’s Thus Spake Zarathustra), this emblematic image of indomitable determination is as difficult to interpret as are the tangled circumstances on which the painting is commenting. For example, only Lewis’ explanation allows us to assert with confidence that the woman who replaces Washington is also the child rather than, say, the child’s mother. The comically tiny oil derrick and superfluous gasoline supply in a hand-rowed vessel is, according to the artist, a commentary on “a diverse, multicultural America, already a nation, already free, yet struggling with the sustainability of a lifestyle still dependent on foreign resources.”

One might assume that Lewis is exclusively interested in immense movements of American history with an optimistic outcome when this painting is juxtaposed with his Tiepolo-like allegory The Blessed Isles, in which a paradise of western mountains is at the center of a composition that includes the text of a Franz Kafka parable about the uselessness of parables.

But in fact he defines his chief concerns as “mortality, desire and history,” and in other works both desire and history are presented with a darkly pessimistic edge. Orange Was the Sky depicts a line of refugees (maybe) fleeing (maybe) some kind of midwinter apocalypse. Sharp Was the Blade implies a much smaller upheaval, as the axe that a muscular arm is sharpening beside a midwinter window seems like an ominous portent rather than an implement for chopping firewood. 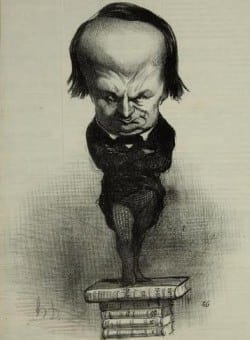 This distinctly contemporary sense of ambiguity, of allegories that don’t quite add up, separates Lewis from the certitudes of the French satirists whose work comprises the larger exhibition at OUMA. Poverty amid the French populace and abuses committed by the powerful are primary topics here, plus a fair number of caricature portraits of the sort that the New York Review of Books made familiar in America a century or so later.

As we might expect, Honoré Daumier is a superstar presence, with a lithograph and a bronze portrait head on loan from the High Museum and eight lithographs and sketches from the collection of Dr. and Mrs. Michael Schlossberg, who provide the vast majority of works in this exhibition. But this necessarily disconnected glimpse of Daumier’s accomplishment is easily matched by the work of any number of figures less known to American viewers.

Some of these latter works are self-explanatory. The meaning of Jean-Louis Forain’s keenly observed scenes of wealthy men engaging in the sexual exploitation of financially marginal young women (including, most notably, ballerinas) is stunningly obvious. Nicolas-Toussaint Charlet’s depictions of thievery and drunkenness also require almost no translation. 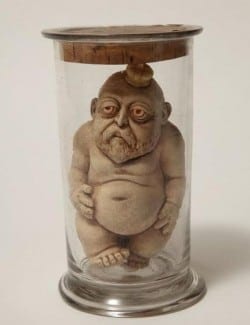 Other works depend on general historical knowledge for their full impact; for example, Adrien Barrère’s plaster figurine of the United Kingdom’s Edward VII as an obese baby satirizes the future king’s excesses during his prolonged wait for the death of Queen Victoria. A little knowledge of the popularity of things Japanese in 19th century France is required to catch the full meaning of Henry Somm’s watercolors portraying fashionably dressed women in proximity to parodies of japonerie.

All of the foregoing are strong, interesting works of art without knowledge of their context, but the most pointedly political pieces are almost unintelligible without wall text. Few visitors will be familiar with the restoration of the Bourbon monarchy in 1815, followed by a brief Second Republic interrupted abruptly by the imperial rule of Napoleon III, who served as president of the Republic until seizing power in a coup d’etat. But without this context, such things as Alfred Le Petit’s allegory condemning what he calls the “crime” committed in December 1851 (the coup) remain impossible to decipher. 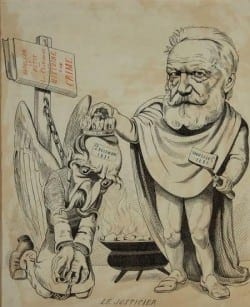 Perhaps this doesn’t matter. Wall texts provide fragmentary elucidation of this history, and the concise but informative catalogue explains, among other things, the several otherwise mystery-laden works devoted to the threat posed to the Third Republic in 1886 by General Georges Boulanger, and contextualizes that post-1870 Republic’s near-suppression of Édouard Manet’s 1874 lithograph that it perceived as seditious. A few remaining mysteries make very little difference in an exhibition so visually enriching.

Both will be on view through December 6.

Nathan Lewis will give a gallery talk regarding his process and sources of inspiration at 2 p.m.on October 3. A number of lectures associated with French satirists and the art of caricature are scheduled in October and November. Click here for more information.