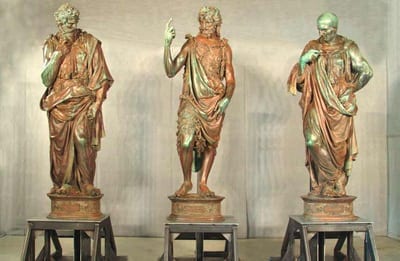 The High Museum has established quite a track record in mounting important exhibitions about the Italian Renaissance. Presentations of Andrea del Verrocchio’s “David” and Lorenzo Ghiberti’s “Gates of Paradise,” enhanced by scholarship and an accessible presentation, marked the American debuts of these newly restored art-historical icons.

“Leonardo da Vinci: Hand of the Genius,” which opened Tuesday, follows suit in many ways. But not all.

Once again, the exhibition brings works of beauty and importance to Atlanta, and later to the J. Paul Getty Museum in Los Angeles.

Gary Radke, the High’s consulting curator on Italian art, has assembled some 20 sheets by Leonardo from the great European repositories and also sculptures by some of the Renaissance giants who influenced him. Atlanta is the temporary home of all the sculptures attributed to Leonardo with any confidence. That would be two: the terra-cotta relief of an angel and a small, surprisingly unremarkable equestrian bronze.

As with previous Renaissance exhibits, this one advances new scholarship, which is de rigeur for any museum that takes itself seriously and wants others to do the same. Radke made news some months ago when he proposed that two figures on Verrocchio’s Silver Altar for the Florentine Baptistery are the work of Leonardo, his star pupil.

“The Beheading of John the Baptist” (below), the tableau containing those six-inch-tall figures, is also in the show. Newly conserved, thanks to funding from the High, it has never before left Florence.

Still, that makes only four sculptures that may be Leonardo’s, a vacuum accentuated by the overwhelming presence of other people’s sculpture. This is a peculiar situation for an exhibition purportedly about Leonardo and sculpture.

It may be relevant to know that the starting point for this project was the offered loan of the three monumental bronzes in the final gallery by Giovan Francesco Rustici. Though well-respected during his day, the artist suffered the misfortune of competing with the likes of Michelangelo for posterity’s attention and hence he fell through the cracks.

The pieces are imposing and impressive, but it’s unlikely that a banner outside the High proclaiming a Rustici blockbuster would draw a crowd. I’m guessing that the fact that his mentor Leonardo advised him during this project allowed Radke to devise a grander theme with a more potent name.

The curator turns the exhibition into an exploration of the artist’s development and creative process, using sculpture as the vehicle. Approached from that perspective, the exhibit is quite rewarding. Radke marshals the circumstantial evidence of the drawings, some gorgeous enough to be worth the price of admission in themselves, to make his points.

The drawings Radke selected show the fluid relationship between the artist’s two- and three-dimensional thinking and doing. In his obsessive quest for naturalism, Leonardo drew figures from many vantage points, whether he was working toward a painting or a sculpture. As an exercise in creating volume in two dimensions through light and shadow, he stiffened cloth and shaped it to simulate drapery, then made the beautiful silver point drawings on view here.

I’m still trying to figure out what would possess Radke or the museum to trivialize this effort with a gallery devoted to videos of celebrities offering their definitions of “genius.” Perhaps they don’t trust viewers to enjoy a serious exhibition. To that point, a reader informed me of a promo on WABE, Atlanta’s public radio station, touting Leonardo as the man who inspired “The Da Vinci Code.” Now it’s Dan Brown who is the genius.

Another possibility is that the museum has more temporary exhibition space than it can fill. Perhaps that explains the text-heavy treatment of Monet’s “Water Lilies” in these same galleries this past summer. In trying to make exhibits seem bigger, they end up making them look skimpy.

The concept is a bit squishy and the tendency to goose up what works fine on its own is self-defeating. On balance, however, the High’s Italian connection has delivered an unusual opportunity for its audience.