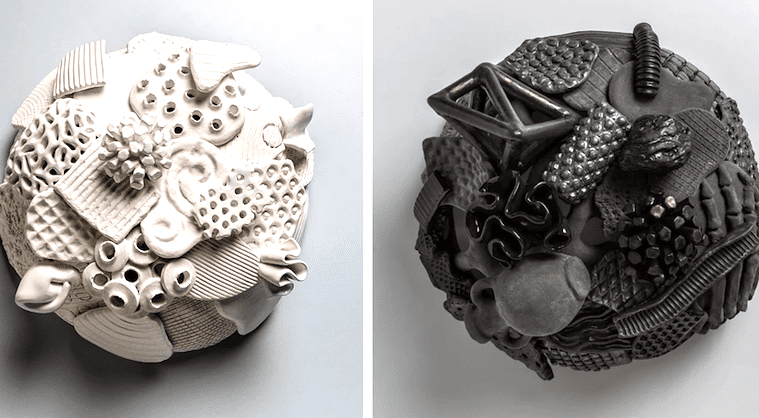 The sculptures in David Robinson's "Alluvium" look like encrustations of generations of objects. "Rondo in White #4" (left) and "Alluvium #11" are ceramic with glazes and underglaze, at 11 or 11.5 x 5.5 inches.

“Alluvium,” the title of David Robinson’s solo exhibition of ceramic wall sculptures — at Poem 88 through August 14 — is the name of the deposits left behind by flowing water — usually referring only to the geological feature of silt and sandbanks, but more recently used to describe the objects swept away and piled up by floods. This broader meaning, which is an excellent metaphor for the stream of history, is what Robinson’s sculptures suggest. 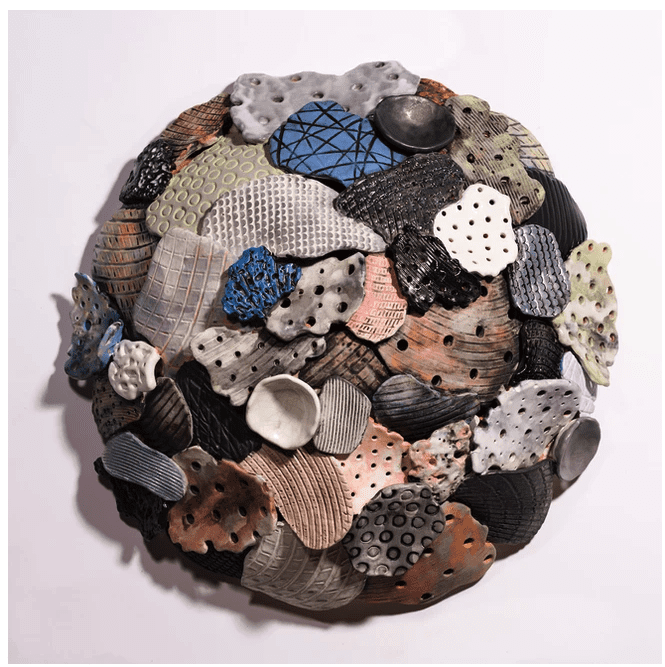 These works look like encrustations of successive generations of objects, with forms clinging together that resemble pieces of coral, shards of broken clay vessels and goddess figures from ancient civilizations. Although the pieces are composed carefully, there is no implied logic or narrative.  Cultures living downstream take what they are given, whether literally by nature or metaphorically by history.

Just as with actual alluvial deposits, no two of these pieces are alike in terms of the individual elements or their arrangement, although some thematic objects recur. The individuality in what could easily have become a repetitive series is one of the many aspects of this show that renders it well worth the modest challenge of making an appointment. (Since much of the Atlanta art world is only now emerging from COVID-19 restrictions, most visitors will already be familiar with timed visits by appointment.)

The exhibition offers few clues as to the origins or possible meanings of the strikingly varied organic forms and cultural artifacts quoted in these individually formed representations. It’s worth noting that except for one or two cases in which repeated objects on a particular piece have come from molds, even the similar-looking fragments are separately created. Although the shapes of the various objects originate in one actual model or another, the details come from Robinson’s imagination. 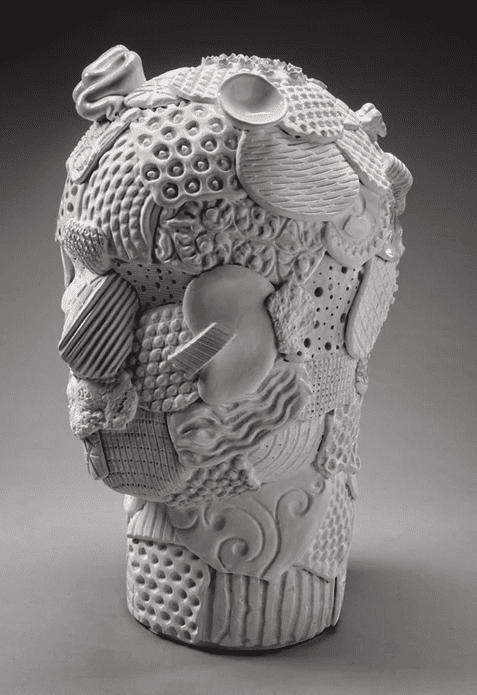 Since most of the pieces are simply titled Alluvium followed by an identifying numeral, when such titles as Black Sun or Elegia appear, they come as an intriguing surprise. Even here, knowledge of the forms of the elegy, or of the cultural contexts of the black sun from the Aztecs and the mystery cults of the Mediterranean onward, may not be of much help.

But this uncertainty is what we would expect from a show that Robinson’s artist statement tells us is about “the residue of the human experience and the elusive search for order, logic and meaning in what is left behind.” A show that contains such “hints followed by guesses,” if I may quote T.S. Eliot’s poem about similar topics, could lead to hours of pleasurable web searches, or hours of contemplation of the objects themselves.

In a sense, the whole show has an elegiac tone, in that it implies that history sweeps onward even when its ruins pile up attractively, as they do in archaeological digs that yield great works of art. The analogy of time as an ever-flowing stream is at least as old as the earliest Greek philosophers, and most likely older than that, but Robinson’s combination of biological and cultural references is a creative rethinking of the idea that successive societies find ways to cope with the changes and find new uses for the wreckage or  natural alterations that the forces of change leave behind.

Poem 88’s artist page for Robinson provides digital images of all the works in Alluvium, and each image can be expanded to full screen for detailed viewing. Even though the full impact of the work depends on in-person, three-dimensional viewing at full scale, this provides an unusually adequate substitute.