South Carolina artist Joe Walters, whose exhibition “Tango” is currently at Solomon Projects, has become known in recent years for his signature wall sculptures of animals, which appear to be made of rusted metal but are actually polymer clay over an armature of steel rod and aluminum mesh. 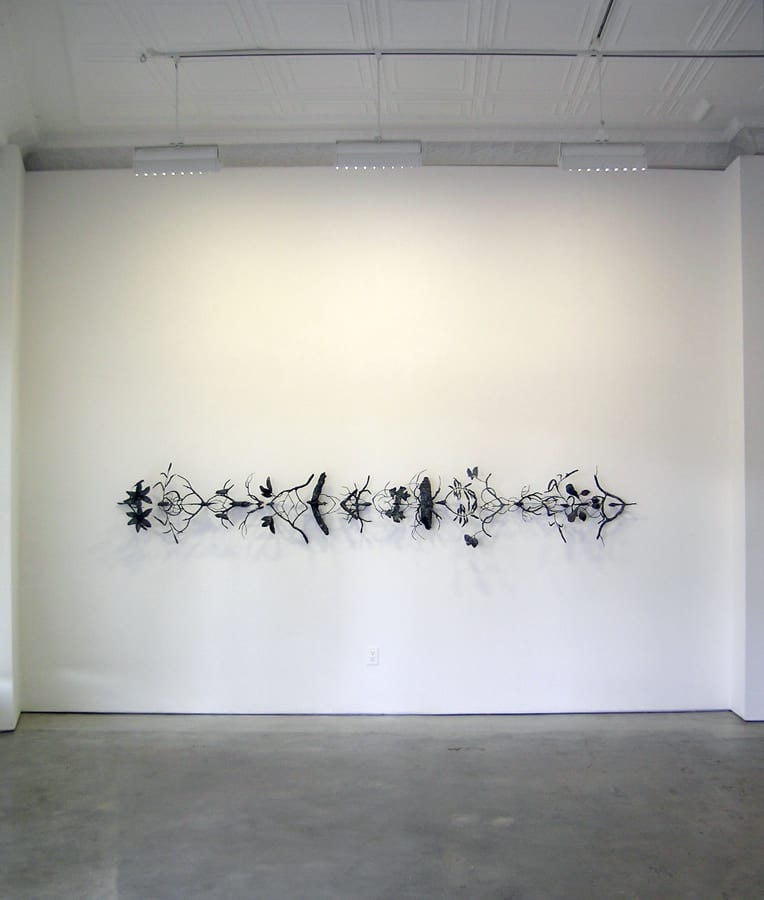 His works on paper, however, are created by folding a sheet of paper in half, pricking holes in the paper and staining the surface with tea, producing a symmetrical line drawing where the liquid seeps through the holes.

This symmetry of image is replicated in two new wall sculptures, both titled “Waterline Kisses” (above). Along an implicit horizon in the center of the sculpture, birds and plants are reflected as they would be in a body of water, each figure at the top accompanied by its inverted twin below. The whole creation of supposedly reflecting twin objects is carried out freehand, making the duplication a technical tour de force rather than a side effect of the process. There are no casts from molds involved. 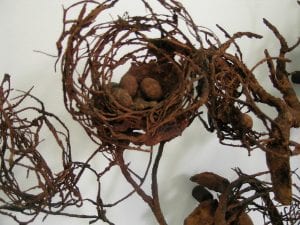 “Tango,” from which the show takes its name, is a seven-part set of twining sculptural flowers, tendrils and twigs that form visual complements and rhythms that justify the work’s dance-related title. It’s matched on the opposite side of the gallery by the gnarled and tangled nests of “A Riff on the Home” (detail at left), in which the sometimes precariously fragile structures hold their sculpted birds’ eggs in an uncertain balance that suggests that while home is where the heart is, the heart is not always at ease there.

These four sculptures (three, if the two parts of “Waterline Kisses” are regarded as a single piece united by the shared horizon line) are accompanied by a few of Walters’ stained-line works on paper, plus a back-gallery series called “Understory,” which focuses on the detritus that forms compose on the forest floor. Here again, what could be disturbing is purely beautiful, as sculpted butterflies hover above the sculpted leaf mold.