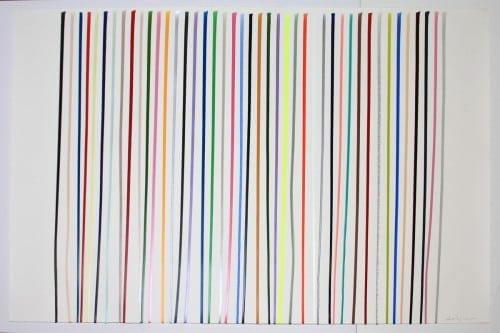 The Atlanta artist created the 20 new works in “Cusp” by pouring lines of nail polish down paper, panel, and enamel supports. He chooses the colors, size, and arrangement of each work, but then lets gravity do the rest. The liquid wanders down the support, thinning as it goes, and then pooling at the bottom.

These dazzling striped compositions deploy colorful excess within a minimalist aesthetic. They also engage in sly repartee with a host of artists from Ellsworth Kelly to Larry Bell on crucial modernist ideas about line and drawing. The largely unabsorbed polish in works on canvas such as “Fresh Attitude” creates fat streaks of color that extend beyond the bottom of the canvas to suspend in space like tiny, fragile stalactites, evoking the drip technique of Action Painters such as Jackson Pollock. Works on paper, where the enamel is more thoroughly absorbed, evoke the staining techniques of Morris Louis’ “unfurleds,” while “A Different Angle,” poured and hung at a tilt, makes reference to the shaped canvases of Frank Stella.

Like the artists to whom he alludes, Ingram challenges the traditional notion of drawing as the most personal and authentic of mediums. Ingram’s pouring technique removes the artist’s hand from the equation and marginalizes artistic intention. These strategies also reflect the aims of Conceptualists and Minimalists, wrote Rosalind Krauss “Line as Language” (1974), to “disengage drawing . . . from expression.”

Scott Ingram: "All Revved Up"

But Ingram also seems to poke fun at the high seriousness of conceptual enterprise. Nail polish is the stuff of fashion, decoration, frivolousness. He emphasizes this and attendant associations of of artificiality and decadence in his choice of over-the-top colors with such names as “Plastic Artichoke” or “All Revved Up,” which often wind up as titles.

Nail polish is also, of course, associated with women. Using it in work that so clearly evokes the New York School cannot help but suggest a lighthearted riposte to the macho posturing of some of its members.

It’s also possible to see in the “readymade” polish of Ingram’s surfaces as a sly comeback to the West Coast “Finish Fetish” artists of the ’60s, who turned to the “trick paints” associated with Southern California hot-rod and surfing culture to meticulously buff their canvases to a high-gloss finish.

Hovering in the cusp between the ordered and the random, between drawing and painting, between the conceptual and the densely material, Ingram’s nail polish works are visually and intellectually captivating.