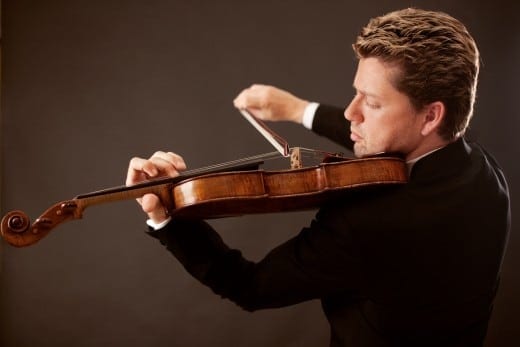 Julian Rachlin is the guest violinist in Atlanta Symphony Orchestra concerts of music by Barber, Prokofiev and Tchaikovsky.

On Thursday the Atlanta Symphony Orchestra performed the first of three concerts of music by Barber, Prokofiev and Tchaikovsky, led by guest conductor Marin Alsop and featuring guest solo violinist Julian Rachlin. The program was repeated Friday in the 620-seat Morgan Hall at Kennesaw State University’s Bailey Performance Center, then again on Saturday at Symphony Hall. Marin Alsop, director of the Baltimore Symphony Orchestra, was the first woman to hold that position with a major American orchestra. (Photo by Kym Thomson)

It has been nearly a decade since Alsop guest conducted the ASO, in September 2005. Since then, Alsop has musically grown from an excellent conductor to a genuine maestro, as evidenced by Thursday’s ASO concert.

Up first was Samuel Barber’s “Second Essay for Orchestra.” The impressive performance by Alsop and the ASO reinforced the 10-minute, 1942 wartime work’s place as a significant contribution to orchestral repertoire — thoroughly American without having to dip into folk or popular idioms to be so.

Born in Lithuania in 1974, violinist Rachlin immigrated to Vienna, Austria, in 1978. He studied with pedagogue Boris Kuschnir at Vienna Conservatory and took private lessons with Pinchas Zukerman. In 1988, the young Rachlin gained overnight international attention by winning Eurovision’s Young Musician of the Year award and becoming the youngest soloist to play with Vienna Philharmonic. Rachlin plays the 1704 “ex Liebig” Stradivarius, on loan from the Angelika Prokopp Private Foundation.

Rachlin was soloist for Prokofiev’s Violin Concerto No. 2. The three-movement concerto, somewhat more conventional than the composer’s previous works, was composed while on a concert tour with violinist Robert Soetens. It was premiered by Soetens in Madrid in December 1935, just before his permanent return to the Soviet Union. The greater conventionality was less likely the result of Soviet political pressure than Prokofiev’s own maturation and musical development. It is a deeper, more substantial violin concerto than the first.

Perhaps the most unique aspect of the performances was that Rachlin’s tempos were rather restrained — more bluntly: strikingly slow. The first movement felt most noticeably so. Perhaps Rachlin was opting for greater control of the music rather than velocity and fireworks. It was otherwise a well-played, controlled performance, but tempo matters as a prime conveyor of musical intent and character.

By comparison, the fastest rendition available is likely a 1949 recording by Jascha Heifetz with Serge Koussevitzky conducting. Most major soloists seem to fall somewhere in the middle between Rachlin and Heifetz. In the 1937 score published by Editions Russes de Musique (Berlin), the opening tempo is clearly marked as being 108 beats per minute.

Tchaikovsky’s Symphony No. 6 (“Pathetique”), composed in 1893, is a mainstay of orchestral repertoire and sometimes it is played that way, rather ordinarily. Not this time as Alsop and the ASO musicians breathed new life and relevance. The first movement, in particular, was an insightful realization with emotive, well-crafted, lyrical phrasing.

At the end, Alsop and the orchestra had a surprise. They played an encore, Brahms’ “Hungarian Dance No. 21” as arranged for orchestra by Antonín Dvořák.

The sound of the orchestra, particularly the strings, between last week’s concert and this one was like night and day: far more focused, better sectional unisons and aliveness. Much could be contributed to Alsop’s rehearsals, but just as much to the players themselves, especially given that most of the roster players in the string section have returned.

But it is worth remembering that January 2015 is the de facto beginning of the season. That effectively made this week only the second in which the orchestra was truly in play, regardless of whatever happened back in November and December after the lockout ended. Those months were a wash, as far as rebuilding the orchestra is concerned, because so much was in disarray with so many absent roster musicians. The real work started this month. Thursday was more than encouraging. It was a must-hear concert.