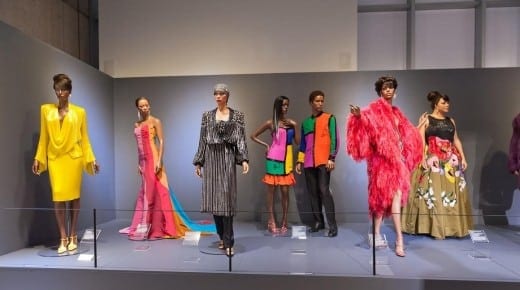 For much of the 20th century, the majority of working African American women wore beige, white, black or gray uniforms as they cleaned, cooked and provided child care for white families. Following the gains of the civil rights and black power movements of the1960s and 1970s, abandoning the neutral dress and the neutral facial expression that came with it became symbolic acts of liberation.

African Americans, particularly women, yearned for new images of themselves as elegant, beautiful and worthy of being seen. Ebony magazine answered the call, not only in its pages but also on the road. Started by the late Eunice Johnson, wife of Ebony founder John Johnson, the Ebony Fashion Fair, which traveled to up to 180 cities annually between 1958 and 2009, played a key role in creating a new image for black women beyond mammies, jezebels and tragic mulattoes.

Inspiring Beauty: 50 Years of Ebony Fashion Fair at the Museum of Design Atlanta through January 4, tells that story through 40 beautifully made and detailed garments by 36 different designers that were either custom-made for the fair or couture designs that had been shown in Paris or Milan.

Most of these dresses are not for the meek. A bronze silk ribbon taffeta ball gown with a hand-painted black and saffron tribal print is fit for a Nubian queen. Designed by Vivienne Westwood for the 2001–02 fair, the gown is shown on a mannequin wearing a feather headpiece (suitable for high tea with Queen Elizabeth) and a pair of gold drop earrings.

Another show-stopper is a dress by Pierre Cardin shown at the 1988–89 fair. The central element of the long-sleeved gown is a five-tier, layered hoop skirt, which is one of the designer’s signatures. Sky meets sea in the iridescent teal, purple, pink and aquamarine sequins covering the dress.

Red-carpeted for the occasion, MODA’s hallway is lined on one side with the program book cover photos from each Fashion Fair. On the other are black, white and red vanities designed to look like the backs of stilettos that hold iPads through which visitors can share their memories of attending the fairs.

The testimonials from attendees and models make a point about the psychological and sociological importance of the fair. However, the exhibit, curated by the Chicago History Museum, would have benefited from more historical context.

There are no copies of Ebony on view, and no reference to the magazine’s importance as a black-centric trailblazer. It was, for example, the first magazine to feature only black celebrities on the covers during its almost 70-year history, and it spoke to the existence of a black middle-class and high society that was invisible to whites.

Materials about how the black elite made their money or the emergence of historically black colleges would have added substance to the show, further disrupting the historical narrative that black people went from the cotton fields to the basketball court.

The lack of context threatens to reduce the exhibit to a display of beautiful garments. On the plus side, however, videos document the struggle that African Americans faced in being accepted as viable consumers for high fashion.

Eunice Johnson came from a well-to-do family, and part of her goal with the Ebony Fashion Fair was to show that not all black people were destitute. One of her challenges was to convince European design houses that there were black people with enough wealth to purchase high fashion garments and that those designers would not lose clients by putting couture gowns on black bodies.

The exhibit also suggests a perspective that was, if not feminist, then definitely ahead of the mainstream on the relationship of body image to the fashion world. Ebony wanted black women to be able to see themselves as they were in high fashion garments, curves and all. By the 1980s, Fashion Fair attendees’ demand for models who looked less runway and more real life increased. Todd Oldham designed a plus-size dress for the 1997–98 fair. The mannequin for that gown is larger than the others in the exhibit, though not as bodacious as the model who wore the dress.

Johnson Publishing Company was a trailblazer in identifying the need for an outlet that captured and valued black beauty. Linda Johnson Rice, the daughter of John and Eunice Johnson and the company’s board chair, says it best:  “We had black as beautiful down long before it was a term.”