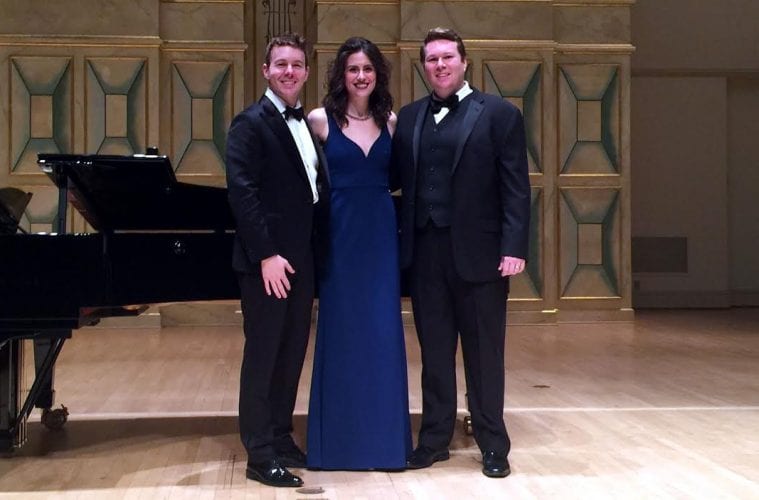 This past Sunday, the Metropolitan Opera National Council (MONC) held their annual Southeast Region audition finals at Spivey Hall. This year’s Southeast Region finals featured 15 young operatic singers between the ages of 24 and 29, drawn from Georgia, North Carolina, South Carolina and Tennessee through district-level auditions, all vying for the top cash prize and the chance to compete in the national semifinals at the Metropolitan Opera House in New York City on March 12, and subsequently the Grand Finals on March 19 in which up to five winning national finalists will be chosen.

There was a gala atmosphere to the day, with the singers dressed in formal gowns and tuxes, and a good variety of vocal talent heard. Among various voice types represented, there were seven sopranos, three mezzo-sopranos, three tenors, one bass and one bass-baritone. There were surprisingly few replications in their choices of prepared repertoire. Among the printed list of 75 works, the tenor aria “Dies Bildnis ist bezaubernd schön” (“This image is enchantingly beautiful”) from Mozart’s Die Zauberflöte (The Magic Flute) appeared three times — not surprising, as Mozart was by far the most frequently appearing name among the 32 composers represented — a total 15 times in all, versus five or fewer times for the rest of the pack.

The regional auditions are only the second stage in the high-pressure, high-stakes audition process. Each year the MONC program kicks off with some 2000 singers competing in 42 districts across the nation, to be winnowed down in the fourth and final stage to a mere handful of winning national finalists.

In operation since 1954, the Met’s annual National Council Auditions have served as a significant path for helping launch the professional careers of aspiring singers. Some of opera’s greatest stars have emerged from the program, among them baritones Thomas Hampson, soprano Jessye Norman and mezzo-soprano Frederica Von Stade. Atlanta-based mezzo-soprano Jamie Barton was a winning national finalist in 2007. In an unusual turn, Sunday’s competition ended in a dead heat: a stunning three-way tie for first place. The co-winners were soprano Jacquelyn Stucker, tenor Alasdair Kent and bass-baritone Alan Higgs, the only Atlanta finalist. The total prizes were equally divided among them at $4,000 each. All three will proceed to the semifinals in New York.

All of the 15 competing singers came prepared to sing five selections from their own operatic repertoire. Each sang one piece of their own choosing and one chosen on the spot by the judges from the remainder of their list.

Stucker sang “Je suis encor tout étourdie” from Jules Massenet’s Manon (a change from her list in the printed program) and “No word from Tom . . . I go to him” from Igor Stravinsky’s The Rake’s Progress.

Higgs, who is a studio artist with the Atlanta Opera, sang “I’ve known I loved you” from Carlisle Floyd’s Cold Sassy Tree and “Madamina, il catalogo è questo” from W.A. Mozart’s Don Giovanni.

Sunday’s performances will be broadcast on WABE-FM radio’s Atlanta Music Scene on Monday, March 6 at 9 p.m.

On a final note concerning Atlanta’s musical legacy, Sunday’s auditions were dedicated to the memory of Elizabeth Nohe Colson, a nationally renowned Atlanta voice teacher and indefatigable advocate for singers and the vocal art, who passed away on February 2 at the age of 91. Services for Mrs. Colson will be held this Sunday, February 19 at 4 p.m. at Northside Drive Baptist Church. In lieu of flowers the family requests donations to The Opera Guild for Atlanta, which sponsors the Georgia District Auditions for the Metropolitan Opera National Council and provides prize money at both the Georgia District and in part at the Southeast Regional final auditions.