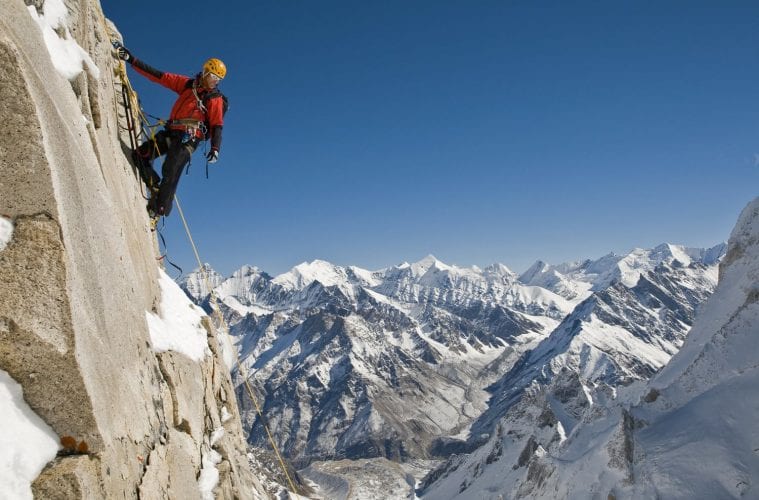 I’m one of those people who gets pukey just leaning over a second-floor balcony. You won’t look up and see me skydiving, much less climbing a sheer stone cliff. So fellow acrophobics, keep in mind: the compelling documentary Meru starts by showing us where its three protagonists spend the night. It’s called a portaledge, “basically a hanging cot with a tent over it.” A cot dangling thousands of feet above the Ganges valley in northern India.

The central peak of the Meru formation in the Himalayas is called the Shark’s Fin. One glance explains why. It seems to slice dorsally through the clouds some 20,000 feet above the ground. And it’s one of mountain climbing’s holier grails — posing the sorts of challenge, according to hardcore climbers, that make scaling Everest look like a weekend in Cozumel.

There are no sherpas to guide your way, secure your ropes or carry your load. And that load has to be heavy. The climbers here haul 200-pound packs apiece with the tools and supplies necessary to meet the obstacle-course nature of the mountain’s varied terrain. “That, to a certain kind of mindset, is an irresistible appeal,” says Jon Krakauer, author of the book Into Thin Air about a disastrous season on Mt. Everest, and an invaluable talking-head who brings perspective to this documentary.

The climbers are Conrad Anker, who will always be footnoted as the man who discovered George Mallory’s frozen body during one of Anker’s several ascents of Everest; Jimmy Chin, a veteran co-climber with Anker; and Renan Ozturk, a guy known for some spectacular no-ropes climbing around the world.

Meru kicks off by capturing the trio’s first attempt to scale the mountain back in 2008. In addition to being one of the team, Chin is also the guy who lugged cameras straight up the mountainside and captured the majority of the movie’s heart-in-mouth footage; his wife, Elizabeth Chai Vasarhelyi, shares directing credit on the movie.

Bad weather stretched the expedition, meant to take only seven days, into 20. It’s not too much of a spoiler to say, well, they didn’t make it to the top. Chin was confined to a wheelchair for weeks afterward.

“I’m not coming back,” he vows on camera. Yeah, right. He later quips, “They say the best optimists are the ones with the worst memory.”

The film’s third act documents the men’s second assault on the peak in 2011. But it’s the second act — covering what happens, especially to Chin and Ozturk, during the intervening three years — that gives the movie its greatest drama. The three confront the mountain carrying psychological and physiological baggage that’s at least as weighty as the equipment they’re hauling straight up into the sky. They’re gambling very much against the odds.

Everest, a fictional feature based on the fatal season on the mountain chronicled in Into Thin Air by Krakauer (who also wrote about Emory student Chris McCandless in Into the Wild), hits screens next month. With a starry cast (Jake Gyllenhaal, Keira Knightley) and all the stomach-churning vertigo the best CG effects can summon, it’ll probably be worth a look. But Meru is the real, gasp-inducing McCoy.