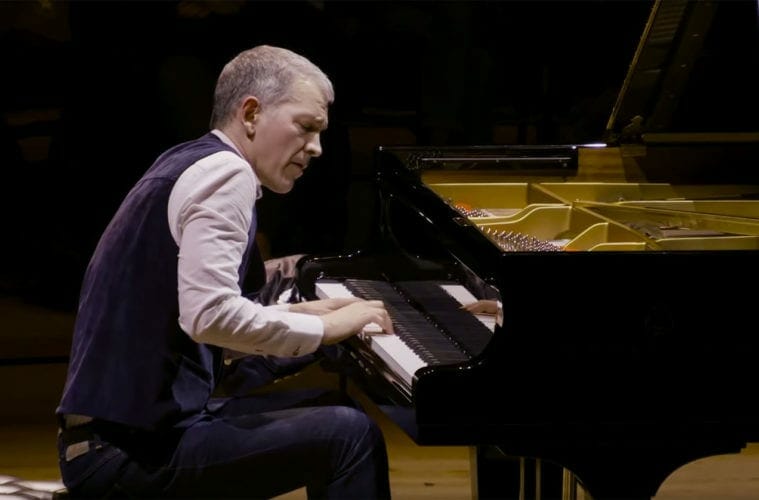 Review: Mehldau’s “The Folly of Desire” brings art song to the age of #MeToo

The concert hall, like this journalistically proper website, has self-enforced decency standards. That’s so 2018. In a new song cycle by Brad Mehldau, The Folly of Desire, a tenor sings of ancient celebrations of rape culture — the gods’ lust for mortals. He sings of rough sex with an angel. And, in a jazzy song evoking the finger-snapping rumble tunes from West Side Story, he spits out these lyrics, from 1935, by e. e. cummings:

the boys i mean are not refined

they go with girls who buck and bite

they do not give a fuck for luck

and hump them thirteen times a night

A musical exploration of primal desire and war-like conquest — and the flipside, of consent and #MeToo — came to Emory’s Schwartz Center for Performing Arts on Friday night. Intriguing, frustrating, sometimes shocking, sometimes profound, The Folly of Desire is a collaboration between composer, polymath and esteemed jazz pianist Mehldau and the illustrious tenor Ian Bostridge. The concert’s second half, Schumann’s Dichterliebe, explored related ideas of love, violence and madness — with glimpses of lucid understanding.

Composer and singer collaborated on The Folly of Desire, “an inquiry into the limits of post-#MeToo Romantic irony,” as the program notes put it. Mehldau wrote the music, setting male poets who are known, studied, worshipped — from Shakespeare, Goethe and William Blake to William Butler Yeats, W. H. Auden and e. e. cummings. Perhaps intentionally, the 11 songs in the new cycle often felt like a poke in the eye for some audience members.

The cycle premiered earlier this year in Germany, a co-commission that includes Carnegie Hall, London’s Wigmore Hall and Stanford Live (Stanford University’s parallel to Emory’s Candler Concert Series, except with a much bigger budget and an international reputation).

They started cautiously, perhaps following traditional advice from Emily Dickinson — not one of Mehldau’s poets — who wrote, “Tell all the truth but tell it slant.”

Thus in poems by Blake (“The Sick Rose”), Yeats (“Leda and the Swan”) and Shakespeare (Sonnets 147 and 75), the protagonist expresses oblique self-awareness: Pleasure means his object of desire, or victim, will suffer pain. Shakespeare can be brutal:

Possessing or pursuing no delight

Save what is had or must from you be took

Bostridge, a supreme craftsman with a distinctive voice, sang everything with absolute clarity of understanding, every consonant crisply articulated. His vocal lines, highly theatrical in delivery, mostly track the rise and fall of speech, whereas the piano part offers deep psychology into the text. Mehldau’s playing, so fluid and taut, often went to unexpected places, keeping the listener on edge. The little piano interludes between stanzas, and the short codas at the end of a song, were often a highlight, so emotionally potent or heartbreaking. As after a war, everyone on both sides comes home somehow damaged.

Tenor Ian Bostridge sang with a tremendous force of personality.

As the cycle progresses, and the language touches on the carnal, the music grows more abstract, more visual. In one section, for two versions of the Ganymede legend (by Goethe and Auden), I had the sensation that Bostridge was singing against a giant backdrop of abstract art, shifting shapes and colorful images. As a pianist, Mehldau evokes the dreamworld.

The cycle closes (if not resolves) with another Auden poem, “Lullaby,” and with the lines “Nights of insult let you pass, watched by every human love.” Too abstract for some, perhaps too vulgar for others, The Folly of Desire received only polite applause. (In Atlanta, if performers don’t get an automatic standing ovation, it’s practically a failing grade.) Yet I won’t be surprised if this major new song cycle has a long life — perhaps with a few revisions after this premiere run of performances. More than almost anything in the concert hall, it addresses what we’re talking about today, in ways that are thoughtful, sympathetic and subtle (or not so subtle).

In his compelling program notes, Mehldau links his Folly with the Schumann. “The perpetrators in the #MeToo accounts and the Catholic church,” he writes, “sanctioned their actions through willful fantasy, essentially lying to themselves, not unlike the 19th-century personage in Dichterliebe.”

Schumann set Heinrich Heine’s poems in 1840, the year the composer got married and wrote more than 100 love songs, from many facets. The songs of Dichterliebe (“A Poet’s Love”) are short, unrequited and hurried, with the piano part often carrying on after the singer is finished — a similar technique used in The Folly of Desire.

One had to wonder if Mehldau — famous for his improvisations, and partnered with a creative vocalist who’s already left a lasting mark on this classic Schumann repertoire — would tinker with the music, somehow remake it to find entirely new images in the old score.

Not the case. Mehldau often had his nose in the printed music, following closely although with phrasing and uncommon tempo choices, they managed to make it their own. They took a warmly radiant song, “Im wunderschönen Monat Mai” (“In the Wondrous Month of May”) at a pace more deliberate than usual, where the poet’s affection — “I confessed to her my longing and desire” — took on a darker vibe, suggesting his love is from afar (aka he’s a stalker) and of course that’s creepy.

In the evening’s context, “Ich hab’im Traum geweinet” (“I Wept in My Dream”) is terrifying, the poet fantasizing about his beloved’s death, “I dreamt you still loved me.” Bostridge was at his interpretive best, singing with tremendous force of personality. Mehldau seemed to pause slightly between phrases, creating almost unbearable split seconds of silence. (And as expected, Dichterliebe received a generous standing O.)