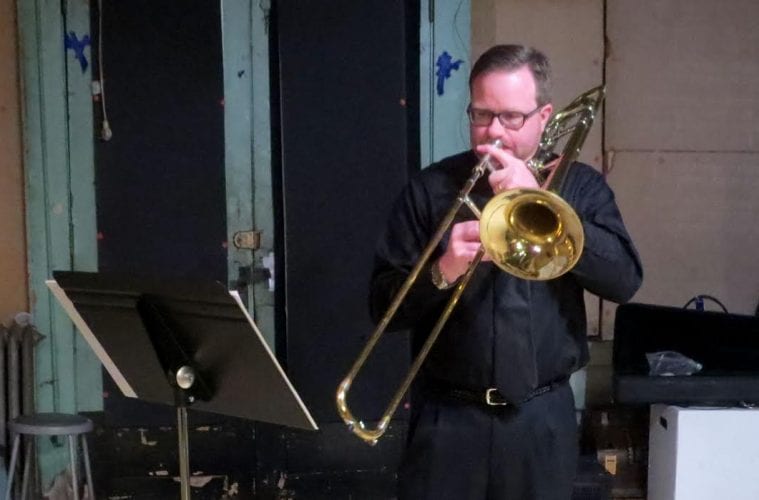 This past Friday, at Eyedrum Art and Music Gallery, Ohio-based composer-trombonist Matthew Saunders presented a recital which featured the world premiere of his “Twenty Views of the Trombone” as part of the venue’s Composer’s Concert Series. The project, which began as a one-minute piece in 2009, was brought to culmination in Friday’s recital as a 40-minute marathon work comprised of 20 short movements for unaccompanied trombone.

“Twenty Views of the Trombone” is an attractive work which holds the attention over the course of its span. Its occasional use of extended techniques, such as multiphonics, and spoken word in a few instances, contribute to its expressive variety, both serious and witty, with some technically challenging passages for the performer, as it spins its musical narrative of the relationship of the composer to his instrument and life.

Saunders, 40, is a creditable trombonist who still performs on the same instrument he has played since he was 15: a Vincent Bach 42BO “Stradivarius Series” large bore trombone that includes an open wrap F attachment with standard rotor valve. He uses a Bach 3G mouthpiece — a large shank mouthpiece with a deep cup, throat and backbore. The concrete side walls in Eyedrum’s limited space supported the trombone’s fat, rounded sounds without occluding quieter sounds, and also allowed the score’s spoken elements to be heard distinctly.

The latter was especially welcome, as absent printed programs, Saunders spoke the title of each movement crisply and clearly before playing it, without undue pause. Even had he not been obliged to do so by the circumstances, in this case the spoken titles contributed to the recital’s overall pace and flow, something that might not have worked so well in a larger, more resonant traditional concert hall.

Although this was the world premiere for the completed work, Saunders had already written and performed 10 of the 20 movements between 2009 and 2014. He finished composing the rest of the work by November of last year, specifically for this performance at Eyedrum.

The beginning and ending movements anchor the work, and the composer says they should always be included in a performance, even if only excerpts from the whole are performed. The opener, “What It’s Like” is contained within the final movement, “What It’s Really Like,” making the first movement a synecdoche of the last movement, amplifying it through extension, repetition and development of its musical ideas. It brings the entire work back in a way to where it began, and the composer back to where he began, albeit perhaps wiser and more experienced.

In between is a series of musical vignettes which thread a narrative about Saunders’ experience and love of playing trombone, and a desire to let others understand what it was like, is like, could have been like and perhaps could be like. Emotions range from nobility to sarcasm, pragmatism to sentimentality and a splash of idealism at times. One could in many ways imagine “Twenty Views of the Trombone” as a kind of collection of related short stories told in music by the protagonist.

“As ‘Twenty Views of the Trombone’ came together over the years,” writes Saunders on his blog, “I found that in many ways it was a piece about my life — I have played trombone for most of my life, after all, and my love for doing that has determined the course of my life.”

Saunders’ goal of composing a total of 20 brief movements was inspired by Olivier Messiaen’s “Vingt regards sur l’enfant-Jésus” (“Twenty Contemplations on the Infant Jesus”) for solo piano, although there is neither a similarity of musical styles nor the mystical religious premises found in Messiaen’s music. Nor is that precedent necessary for appreciating and enjoying Saunders’ “Twenty Views of the Trombone,” which stands well on its own both musically and as a rarity of trombone repertoire, for total duration and endurance if nothing else.

On the one hand, it is quite suitable for small alternative venues like Eyedrum but will most likely find its welcome place among trombonists in the college and university recital circuit. No doubt that as word spreads among trombonists, it’s a piece that will be picked up by them and performed again.