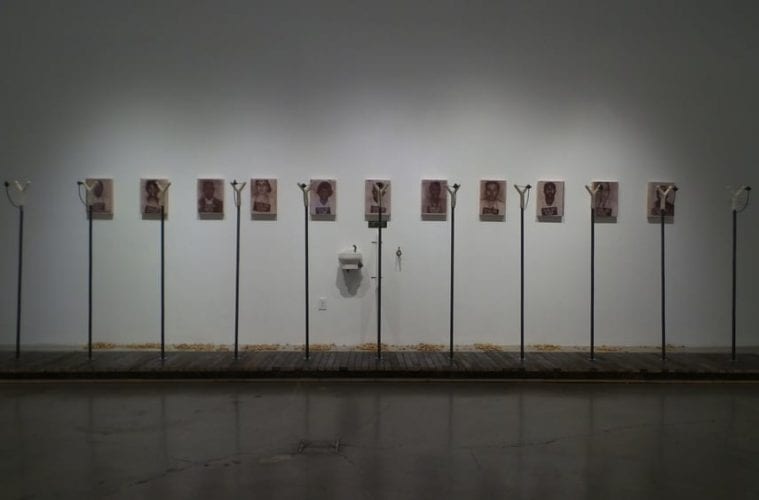 Review: Masud Olufani’s “Poetics of the Disembodied” blurs the line between mediated and unmediated 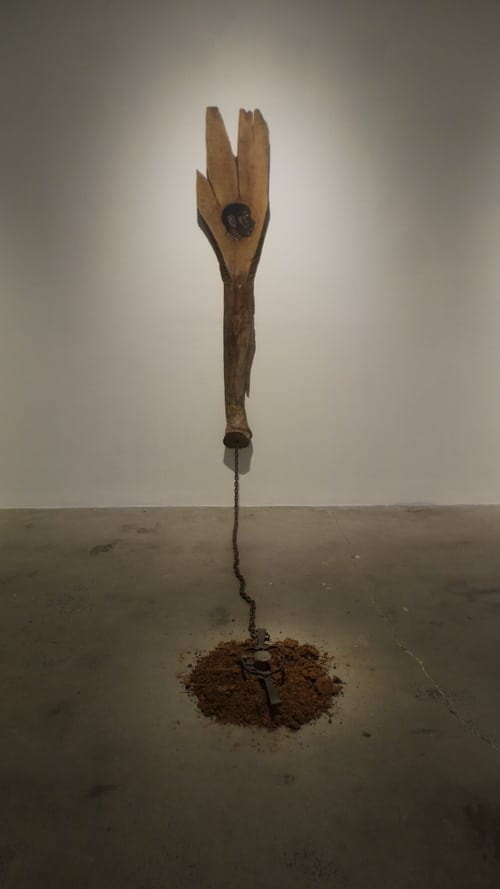 Because America’s slave history still cuts the country, still wounds horribly, and because we persist in refusing to admit errors and injustices that follow from that history, it is “barbaric” to say anything critical about any attempt to expose to the light those injustices and that history. Adorno’s choice of that word in his well-known claim about poetry after Auschwitz implies a corollary: that anything less than a forceful, direct confrontation with terrible acts is an insult to the victims of those acts.

While not every piece in Masud Olufani’s Working Artist Project exhibition at MOCA GA, Poetics of the Disembodied (at MOCA GA through September 10) is about slavery, it is in all of them. Many incorporate explicit material elements long-associated with the enslavement of African-Americans. While the ubiquity of chains, ropes, cotton, and shackles might be viewed as cliché or tired in the field of contemporary art, the fact remains that no image or expression can be too direct when attempting to address an immense injustice. Writing about a 2007 exhibition at the Victoria and Albert Museum, a reviewer asked: “How do you make an exhibition about [slavery] appealing without resorting to the over familiar shackles and chains?”

A better question is: why wouldn’t artwork about it “resort” to these elements?

Similarly, an aesthetic of old clothing, antique machines, rough or basic materials refers to the 19th century, to handmade over machine-made, and to a “what is available” approach to making art (often the only one open to enslaved peoples). All of these choices fix viewers’ attention on the days of slavery in America.

A consequence, however, of the repeated incorporation of such elements into work displayed in the mediated, heady and elite world of galleries and museums is to diffuse their potency. Discussing his work in a 2006 article in The New York Times, Fred Wilson said, “You can easily in a museum lose the seriousness of the things you’re dealing with . . . Museums are good about making you forget the context. Every once in a while you have to step back and say, ‘My God, what am I dealing with?’ I want people to be blindsided by it and caught off-guard.”

The inclusion of contemporary art in museum exhibitions about the history of slavery has been viewed as “a simple surrender rather than face the complexities of representing a painful and traumatic past” or “as being too complex or too tangential for visitors.” Early public art intended to celebrate the freeing of slaves was almost immediately questioned: celebration both hides the horror of the slave experience and glosses over the ongoing suffering of the formerly enslaved.

Bringing objects symbolic of  slavery into contemporary art creates another challenge: skillfully integrating such powerful visual elements with the artist’s own ideas. In Poetics of the Disembodied, Olufani brings together objects and materials symbolic of slavery and the civil rights era with his own sculptural forms to “correct an historical narrative,” just as Wilson “attempts to adjust our vision, to right the balance of history, and to amend the past with a view toward the present.”

Olufani studied sculpture, and the works with the strongest purely sculptural aspects are the most effectively realized. My understanding is that the artists who create work for MOCA’s WAP series have free rein to choose what products of that project to include in the resulting exhibition. In Olufani’s case, some curating might have helped. His superb ability to create objects is present, yet the strong pieces, in which meaning and form are unified, are somewhat crowded by others, in which there is a less fluid relationship. 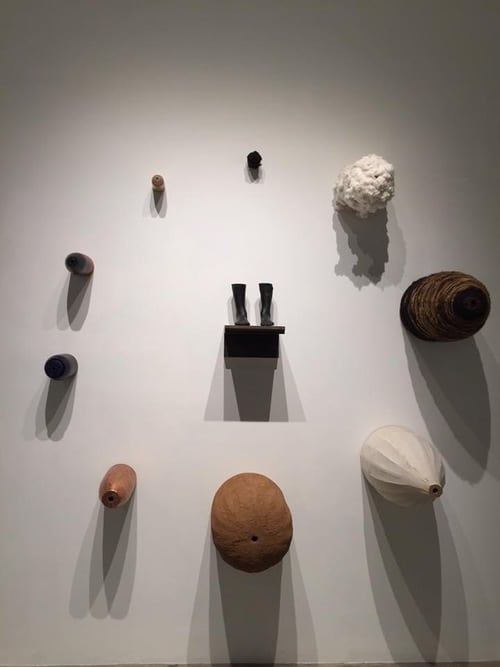 An example of the former is “Constellation Reconstituted,” a circular grouping of similarly shaped objects made from varied materials. The piece has internal coherence and visual variety, or rather, the forms, materials, and colors of its individual elements have a strong, clear meaning that is in concert with literal, or narrative, aspects. I saw the objects as “basket-shaped,” or since each has a hole in its “base,” plant-pot-shaped. In his artist talk, Olufani described the shape as ambiguously either bullet- or hive-shaped. The former is obviously connected with America, today, and the lives of black people, while the latter refers to their handmade quality. Some of the objects’ materials more clearly spell out the work’s symbolism: the generally antique quality of the objects describe the things made by hand, in the 19th century; the “hives” made from cotton and dreadlocked black hair, of course, bring to mind the labor of enslaved Africans in America.

The ordering of objects from smallest at top, growing more or less larger proceeding counter-clockwise, visually produces a circular motion.

In the center of the ring of “hives/baskets/bullets” is a shelf on which stand two small wooden feet-to-calves. These are black. Wooden forms of black figures, like mannequins, are images of objectified human beings, and thus a slave symbol. Amongst many others, Atlanta artist Radcliffe Bailey and British-Nigerian artist Yinka Shonibare have both utilized stiff wooden forms in their work, seemingly to open questions about cultural identity (Is one’s slave heritage connected to who that person is? Do the qualities of being a slave strip away individual identity?), or to “transform and reappropriate their audience’s gaze in an explicitly performative act of self-determination.” Here, the feet are the feet of a worker, a maker of objects — enslaved or working class? Presenting black body forms Olufani exposes questions of identity implicit in human enslavement while also reclaiming black identity through direct presentation. 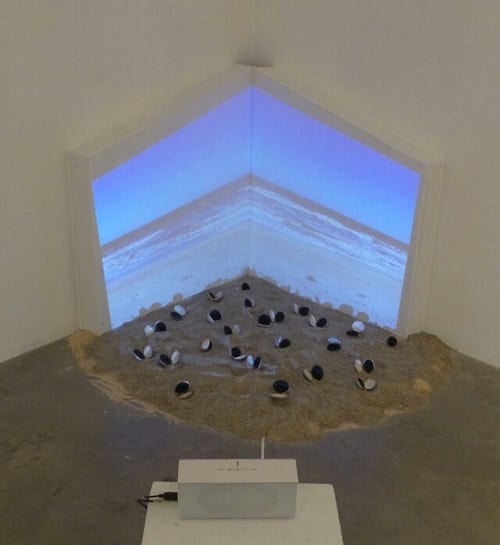 “The Listeners/Witnesses of the Trade” (2016). Resin, seashells, sand, video.

“The Listeners/Witnesses of the Trade” incorporates a small video projection in one corner of the room (a view of the ocean, waves gently crashing onto a sandy beach) with a soundtrack of a woman’s voice sing-songing a Muslim prayer. In the triangular space formed by the two gallery walls that display the ground-level video image, is a tiny tableau of sand, atop which are arrayed clam shells, opened, each with a dark, chocolate-y shaped form within. The low angle of the projection creates at eye level a chevron-shaped seashore, waves thus moving both up and inward by the illusion of a flat image split into an angle. It is a peaceful and lovely peace, although ambiguous. What is the prayer about? What are the clam sculptures? (Olufani explains that the piece relates to the many Muslim slaves who jumped ship or were thrown overboard off the Georgia coast, drowning.) Here, then, despite the absence of an appeal to standard slave-tropes the piece succeeds in evoking emotions in the viewer appropriate to Olufani’s intentions. Art ‘about’ slavery in the contemporary art world can also be subtle. The piece works whether one knows its narrative meaning, or not. It is muted, beautiful and elegiac, regardless.

While from its earliest instances to the present, some artists have taken an aggressively confrontational approach when referring to the African-American slave experience, Olufani’s work largely doesn’t, bringing in chains and cotton as symbols, rather than as direct evidence. This lightly mediated presentation strives for the effectiveness Fred Wilson achieved in his 1992 “Metalworks” and other pieces culled from museum collections. The forceful relationships created in Wilson’s work are, however, elusive in Olufani’s pieces.

As noted above, directness about slavery is a necessity because “[t]he experience of captivity in the Americas has been described precisely as a blind spot in the memory of the West.”

The work that is the most effective in presenting a confrontational image and exposing a local blind spot is “Blocked,” a large video projection showing Atlanta’s Five Points MARTA station. Gradually, another image overlays it: a slave market that once stood on the spot. No marker or memorial notes the former presence — the same blindness that compels artists to bring right into view, unmediated, the thing elided from our history.

Despite the prevalence of slave elements and 19th century aesthetic, the work Olufani presents is as much about present identity and memory as slavery itself. In an essay about postcard images of lynching, Marcus Wood writes in the journal Slavery & Abolition, “How can we ever claim to be certain about the limits of ‘black visual culture’ in a white world saturated with guilt, denial and layered techniques of mendacity?” 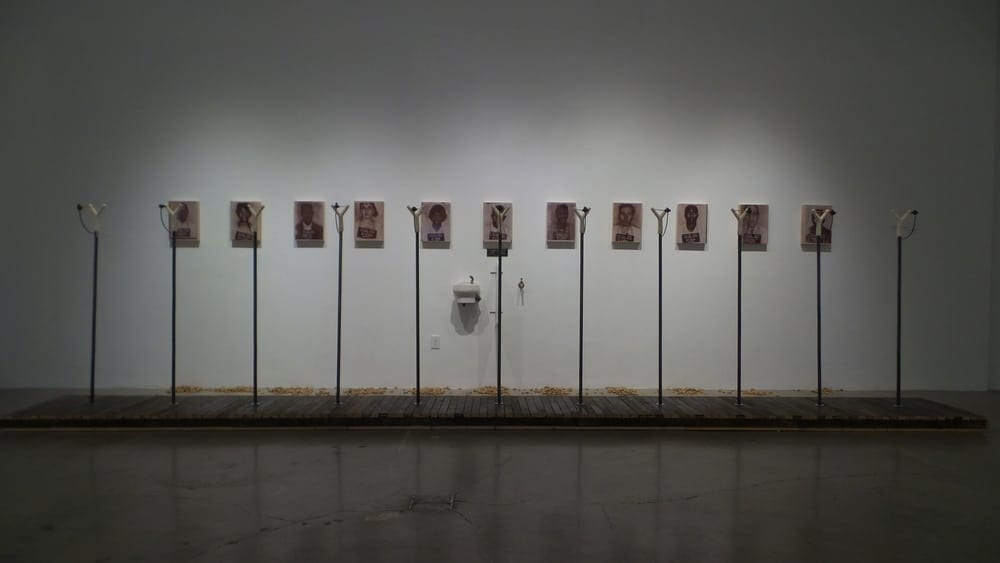 The largest piece in the exhibition, “Freedom’s Price,” is a series of mug shots of Freedom Riders along the gallery’s back wall. Facing the 11 photographs is a series of slingshots at picture level, each with a rock pulled back taut, held in tension, aiming straight at the faces in the photographs. If this isn’t clear enough: a pile of rocks rests on the floor beneath each image, and in the very middle of the photographs, a water fountain marked “whites” and a faucet marked “colored” are attached, separated by a partition. Olufani admitted that “it doesn’t take a Ph.D. to figure it out,” and the piece leaves no room for the viewer to find any other meaning than the purely historical: “On May 14th, 1961 [. . .] a Greyhound bus carrying 9 Freedom Riders and 5 other individuals was stoned and burned outside of Anniston, Alabama.” It shows again the (false?) division between mediation and meaning and that speaking or creating poetically about social injustice runs the risk of confusing aesthetics with ethics. Artists who choose to employ historical materials have to find a way to integrate skillfully the direct, unmediated quality of such materials with their own contributions to produce an original portrait or narrative. While many of the works in Poetics of the Disembodied show a thoughtful and even beautiful  integration, others (like this one) pile unmediated materials one atop the other, creating a catalog rather than a portrait.

Close examination shows pockmarks in the heavy resin coating on the photographs: Olufani himself fired stones from the slingshots at the images. On the one hand, this is simply the artist making his work, not with brush or saw or video camera, but with flung rocks. On the other, the act was a performance, a re-creation of hatred toward brave figures. In his act of simultaneously creating art and re-creating a terrible historical act, Olufani once more blurs the line between mediated and unmediated.

Olufani noted that none of the rocks cracked the thick layer of resin covering the photographs. One might also say that forceful, unmediated images placed in contemporary art are similarly resistant: deflecting rather than affecting their meaning.