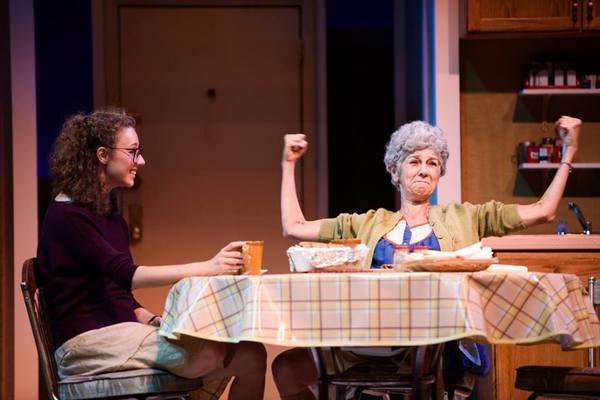 She’s not the central figure in the romantic comedy Crossing Delancey, but the character of Bubbie is often the scene-stealing heart of the play. And when the role is taken on by the wonderful Mary Lynn Owen, the other performers often have to content themselves to playing second fiddle.

Crossing Delancey is the second outing of the Alliance Theatre’s 2017–18 traveling road show as the company renovates its theater space and performs in various venues around the city. The production runs through November 25 at the Marcus Jewish Community Center of Atlanta in Dunwoody. It’s a dated show, but one that can still please.

In Susan Sandler’s play, Isabel (Sochi Fried) — aka Izzy — is a young single Jewish woman running a small bookstore in Manhattan. Her grandmother Bubbie (Mary Lynn Owen) looks after her and gives her advice. Soon a marriage broker/matchmaker (Joanna Daniels) makes her way into the picture and sets Izzy up with Sam (Andrew Benator), who sells pickles. Their initial date doesn’t go well. Izzy has her eyes set on Tyler (Daniel Thomas May), a noted author whom she fantasizes about. Sam presumably has less to offer Izzy, but he is probably better suited for her.

Like the Alliance’s Shakespeare in Love earlier this fall, which was staged at the Conant Performing Arts Center at Oglethorpe University, the former home of Georgia Shakespeare, this version of Crossing Delancey recalls another lost theater. The late, great Jewish Theatre of the South, helmed by Mira Hirsch and housed at the Marcus Jewish Community Center of Atlanta, closed almost a decade ago.

As directed by Leora Morris, the show has some undeniable charms. The problem is, though, that Crossing Delancey was a fairly soft play when it was written and staged in 1985, and the years have not done anything to toughen it up. (The 1988 film version starred Amy Irving as Izzy and Peter Reigert as Sam). It’s still more interested in one-liners, many of them courtesy of Bubbie, than substantial character development. (“What is . . . wooing?” asks Bubbie after she has received a present from Sam in a line that might have been funny 25 years ago). The matchmaker scenes, especially here, don’t have much weight either, and Daniels overdoes her work.

Morris directs this energetically, however, and her cast is overall quite likable. May is fine as the author who pays Izzy scant attention until she appears before him in a low-cut dress, headed to another date. The actor, who has been doing more TV and film than theater of late, doesn’t overplay the character. It’s nice to have him back on stage. Benator’s Sam is a less showy role: he’s not going to walk in a door and make women swoon, but his sincerity and low-key charm make his character grow on us as much as he does on Izzy.

Fried’s Izzy is a little problematic. Making her Alliance debut, the actress is appealing enough but just not as comfortable or as charismatic as her co-stars. She seems a bit distant, absorbed in herself, but she does warm up. (In all fairness, that might be more the character than the actress). She’s better in her later scenes when her character is more prone to observing and listening. Her kitchen sit-down conversation with Sam near the end of the production is worth wading through the jokes before it. It’s a terrific moment during which she lets her guard down a bit and starts to see Sam for who he is. She doesn’t say as much as Sam does, but her eyes speak wonders.

Yet what’s most likely to stick in memories is Owen, who played Izzy in 1990 in a Theatrical Outfit production. Although the script doesn’t flesh the character out as much as she needs, Owen’s timing is precise, and she nails every scene. She’s wise and caring but also smarter than she lets on. The actress’s ability to submerge into a character is very much on display here.

Technically, this is a polished, sharp-looking production. Kat Conley’s sparkling set is largely dominated by Bubbie’s apartment, although it also has room for Izzy’s bookstore and a few other smaller locales.

For a regional theater that regularly stages world premieres and cutting-edge work, the Alliance’s decision to stage this play seems retro, and a little square. But the ensemble luckily bails the production out.