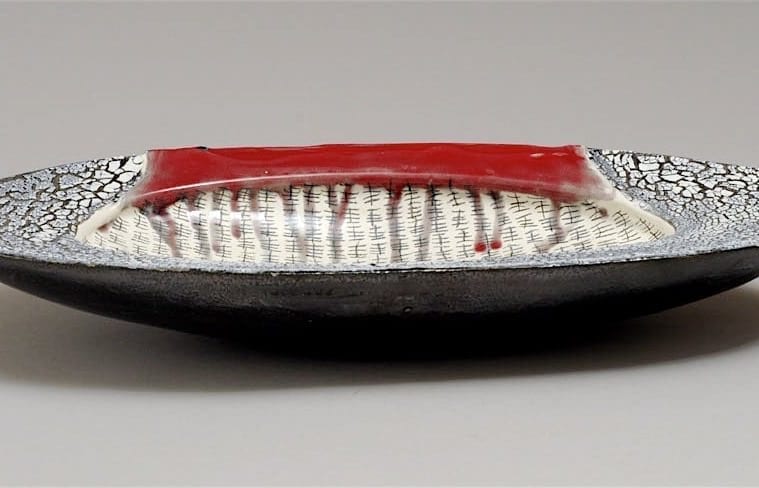 Review: Petrirena’s “The Distance Between,” a dauntless embrace of love, pathos and beauty

The Distance Between, Mario Petrirena’s haunting exhibition at the Museum of Contemporary Art of Georgia, is a retrospective, but it is not displayed chronologically. This in itself is a statement.

The Atlanta artist’s career is not characterized by formal and conceptual leaps or even linear evolution. It is one of iteration. Over the course of 30 years, Petrirena has continually drawn from a well of resonant images and materials to explore a constellation of themes. Memory and loss. Humanity and inhumanity. Family and selfhood.

Hardly novel topics for art, yes. But, like food or love, they are infinitely varied. Petrirena’s take is intensely personal, bound to his traumatic experience of the Cuban revolution and his family’s exile. To be a child in those tumultuous times meant executions broadcast on television and family members arrested. For him and two sisters, it also meant separation from their parents, who sent them ahead to the U.S. in a children’s airlift called Pedro Pan in 1962, to an orphanage in Pueblo, Colorado. The eight-year-old was reunited with his parents and the rest of his siblings eight months later and made a life in Florida, nestled in his parents’ fierce pride in Cuba and love of America. 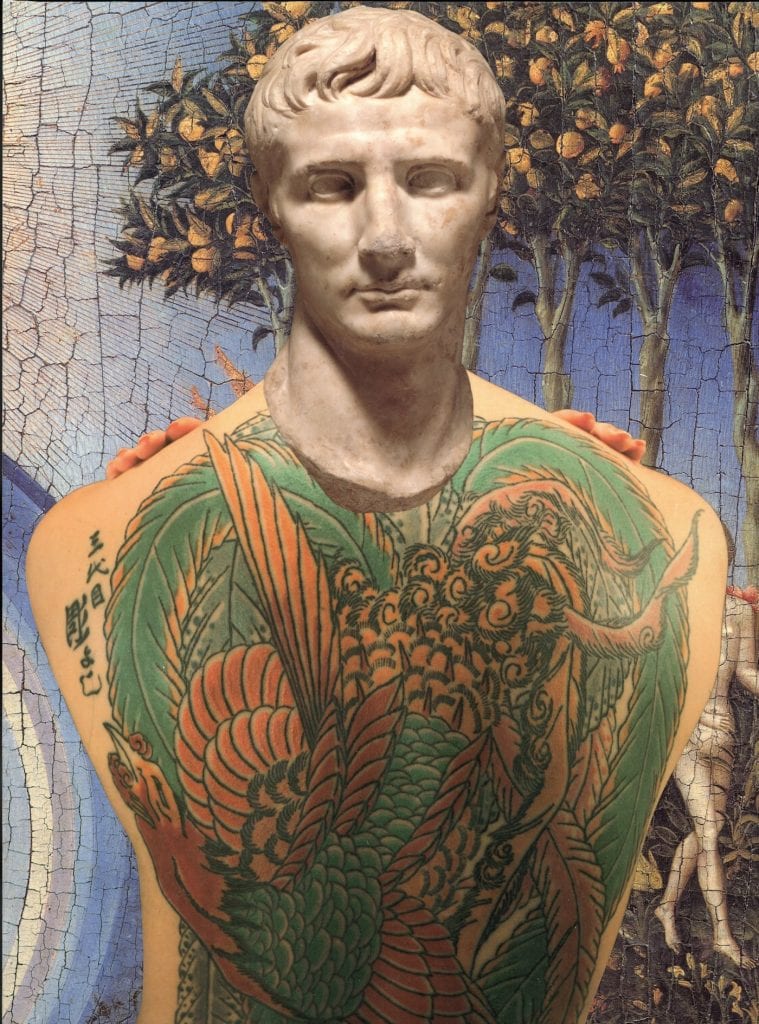 These themes of fracture and assemblage are built into his works. They are evident in the way photos and magazine clips layered and elided in his collages, and in the mix of personal and found objects — rusty street detritus, photos, flea market finds — he uses in many of his sculptures. Perhaps because his family left their belongings behind, he invests these things with talismanic energy.

Not surprisingly, Petrirena, who has not yet returned to Cuba, holds onto his memories for dear life. References to the past and feelings for his family are central to his art. They are present as allusion — the religious tokens prevalent in his work are nods to his devout Catholic parents — and the emotional outpourings handwritten on the surfaces of many works, a device perhaps learned from photographer Duane Michals when he gave a lecture at the University of Florida.

Unlike Michals, however, legibility is not a value. The words that spiral around a form or are half-hidden inside another are urgent whispers, a necessary and ultimately private act. If the viewer catches snatches of his interior conversation, that’s enough. The collages can be even more cryptic. Their surreal juxtapositions, perhaps a legacy of Jerry Uelsmann, also a University of Florida professor, hint at meaning that is hovering just beyond cognition, like a barely remembered dream.

Petrirena applies the same strategies to express his feelings about the state of the world. Wonderfully Imperfect (2003), one of the first sculptures one comes upon in the show, exemplifies both his use of clay in combination with found objects and the poetic pith of his best work. It consists of a 22-inch-tall ceramic, hive-shaped form, which he has covered with writing (an ordeal of a task!) and occasional decoupaged images of the Statue of Liberty. The text, which muses about American ideals, dates from 1992, but, after the 2003 invasion of Iraq, he added the rusty fencing that encages it now. [Things aren’t much better: note Lottery of Existence (2005), in which he has altered the proportions of the hive to suggest a warhead.]

Petrirena, who has an MFA in ceramics from Rochester Institute of Technology, makes his feelings more explicit in such clay works as Killing Fields (1985), dabbed with bloody red marks, or Conspiracy of Silence (1986), a response to the Holocaust. He covers a bust with little faces, each an individually made mold (often from an image his mother’s saint, Santa Barbara). These are a formal signature as well as an effective, somehow poignant device suggesting humanity.

The Atlanta artist, who curated and installed the show, juxtaposed the political works with a series of headstones, which date from 1986 to 2004. Like the overturned clay vessel shapes displayed on a nearby wall, these minimalist, almost abstract endeavors derive power from their sleek simplicity, which calls attention to his way with surface and texture. 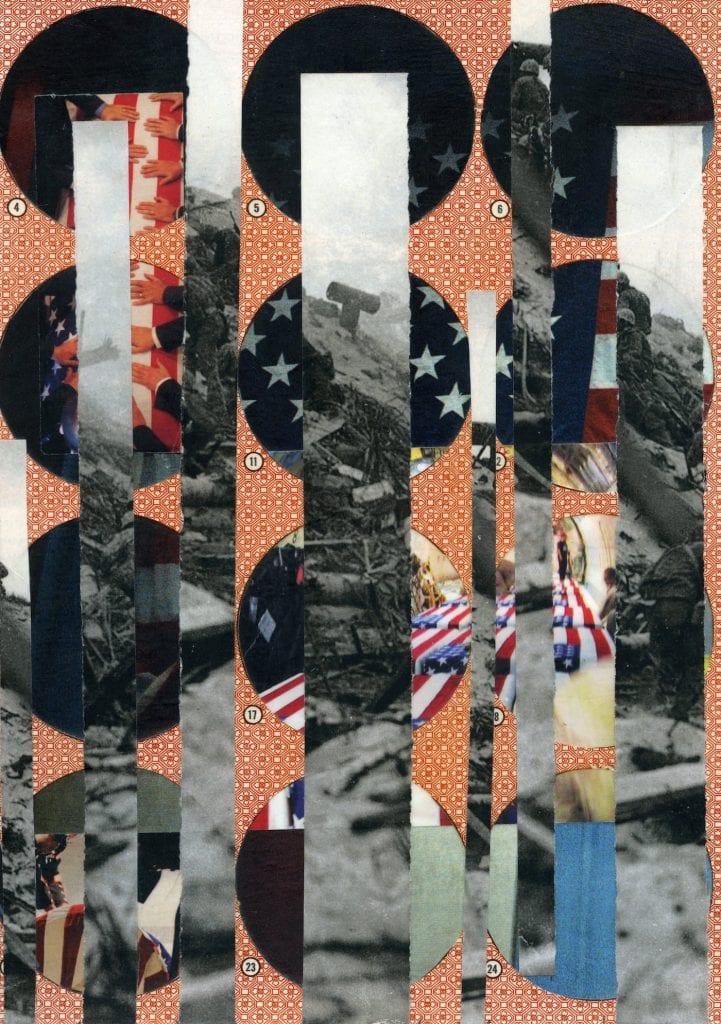 Many of the works in which Petrirena explores selfhood, otherness and the often-denied racial impurity of the human race are installed in MOCA GA’s large room. One series is a sort of Mobius strip of spliced-together parts of faces that are a mix of races, ages and ethnicities. While the pieces aren’t among the strongest visually, they certainly have political currency. Their titles — Me, You, Them, We, for example — aptly sum up the state of our nation.

A mournful mood pervades the galleries. The dominant photographic self-portrait is one in which his eyes are closed; it looks like a death mask. In addition to the headstones, there are object-filled containers resembling memory jars traditionally left on African American graves and a display case filled with plastic flowers that reads like a casket.

The latter is the center of The Inaudible Voice of if All, an installation that is the last piece in the show. In this valedictory work, Petrirena has placed past works and often-used materials — what he might call pieces of himself — on the floor around the case. This installation does not cohere to my eye, but then I’m drawn to his works with fewer parts and those in which many parts are subsumed in a whole, such as his Memory Pole (2011).

I would be remiss not to mention that the joy and humor that characterize the artist’s personality are also present in his art. For instance, Petrirena satirizes world leaders in an ongoing series of collages. Calling attention to the connection between power and machismo, he might give the men bodies like The Hulk, costume them as Napoleon or, what would probably be more humiliating to these types, put them in a dress.

He is an unabashed celebrant of visual pleasure, as evident in his most recent collages — combinations of fragments of Islamic calligraphy, rich color and crisply cut shapes suggesting ornamental screens.

And most of his public art projects are about sharing the pleasure of art. The Giving Tree, for example, is an ongoing practice in which he hangs a little object on a hook in the tree as he passes on a favorite walk in Decatur. Often these random acts of beauty are reciprocated.

In an art world in which it is almost a sin to be earnest, Mario Petrirena is unafraid of love, pathos or beauty. In his best work, his heart is not on his sleeve; it is embedded in the symbolism of the objects he finds, the materials he uses, the care with which he puts them to use and the themes he explores.