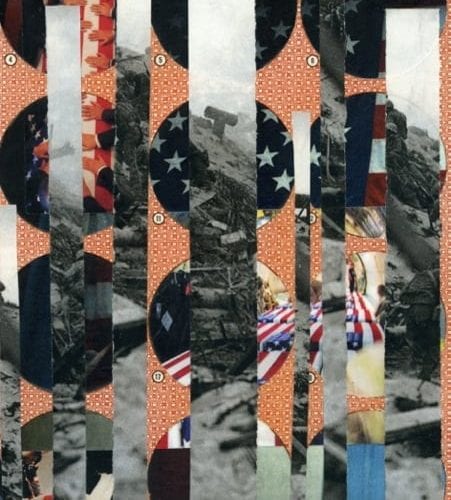 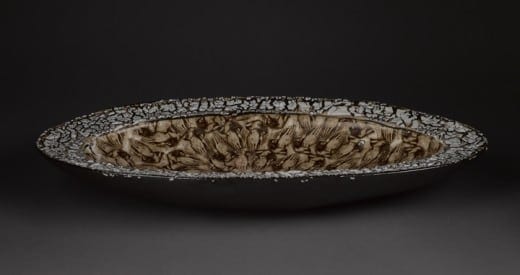 Mario Petrirena’s in the remembering, at Sandler Hudson Gallery through January 17, is in some ways a retrospective of Petrirena’s various artistic strategies. There are ceramic sculptures, collages, assemblages, an artist’s book and memory jars, all dating from 2013–14. Some seem thoroughly familiar, but others seem like surprising departures.

What seems certain is that Petrirena is no longer plumbing the specific details of his personal biography. To cite only one example, the formally dressed man and woman standing in a cornfield whose image is affixed to an antique stamp-moistening roller are anonymous, part of a trove of found photographs that Petrirena has made into art.

The Atlanta artist continues to use some of his personal symbols. A ceramic vessel titled anchored in gratitude, for instance, contains a pattern of interlinked hands, reminiscent of repeated patterns in earlier works. Another vessel, Untitled (white), contains handwritten text overlaid on a floral pattern, a configuration seen in previous exhibitions. 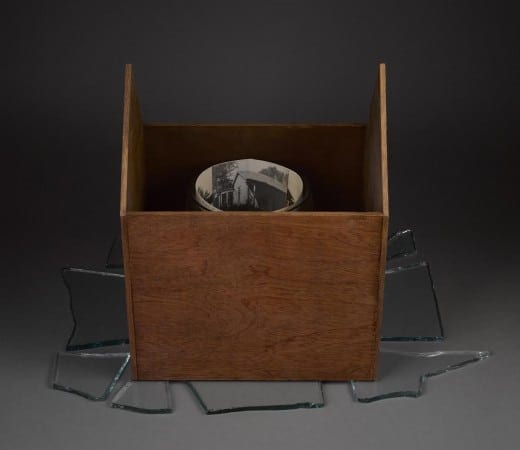 What’s different is that the meaning of these emotionally affecting pieces is indeterminate. Tibetan prayer flags and texts form parts of more than one work, but the pleasing geometry in which Tibetan lettering is combined with Chinese texts in two untitled pieces suggests a vague reference to Asian metaphysics rather than a specific political allegory. 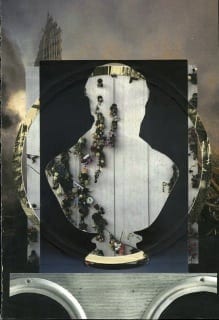 This initially seems not to be the case in the collages that contain images from the destruction of the World Trade Center (bouquets of sorrow) and the devastation in the wake of Hurricane Katrina (the cost of not forgiving), but even here the references are open-ended. The message is one of compassion and reflection, but a vaguely defined one.

This is actually what Petrirena intends. A statement applicable to earlier collages notes that he is trying to explore the ambiguity of memories, which often blur when we begin to question their veracity. All these works convey strong emotions, as is suggested by the resonant titles: of dreams that were; sailing in the dark; the old uncertainties.

The evocative loveliness of these various pieces is engaging even without our comprehension. Why is the collage in of complicated doubt enclosed in a wire cage? Why does the house sculpture in seasons of darkness contain photographs of other houses, none of them suggesting a season of darkness? What is the difference between the exquisite ceramic cone titled in the trenches of uncertainty and the very similar cone that remains untitled?

Two ceramic domes, titled the place of silence and and now, silence, may suggest that the questions have no obvious answer; if Petrirena is making art based on wordless intuition, they may have no answer at all.

His memory jars contain painted cups made by others, artificial flowers, small ceramic faces like the ones that populated his earlier sculptures and various other objects that may well stir our own unarticulated memories without bringing any of them to the fore. Like the found photographs and the floral patterns in the other works, these objects frequently resemble half-remembered ones that are part of many people’s pasts.

The artist and Dashboard Co-op’s Beth Malone will conduct a conversation in the gallery on December 10 at 7 p.m..