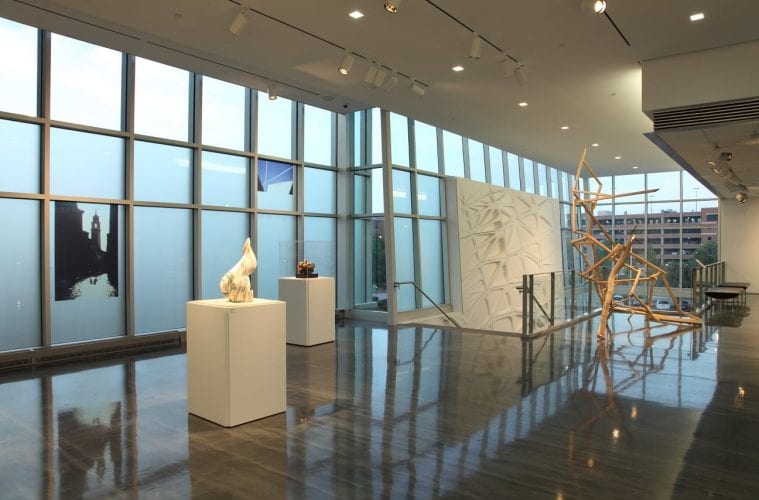 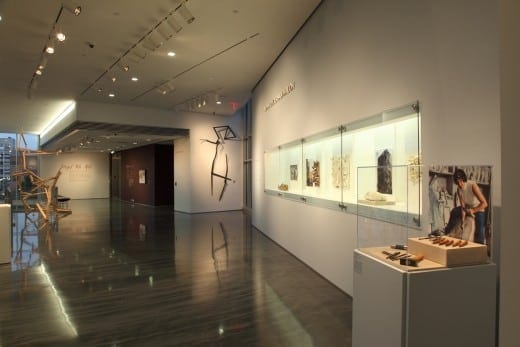 In 1999, Bernard Zuckerman commemorated his late wife, an artist, by giving Kennesaw State University’s art museum more than 130 works, including sculpture, photography and paintings that survey her career from 1953 to 1993.

Maria Artemis Selects: Ruth Zuckerman, a selection of Ruth Zuckerman’s abstract work from the permanent collection curated by the Atlanta-based artist sculptor Maria Artemis, marks the first reinstallation of the Ruth V. Zuckerman Pavilion since the opening of the Zuckerman Museum of Art on March 2014.  It will remain on view through May 2017.

The exhibition is a spare, elegant selection of Zuckerman’s sculpture in wood, bronze and marble from the early 1960s to the mid-1970s and five of her undated photographs, selected for their visual affinities with her sculpture and a hint at what the artist was thinking about or looking at. 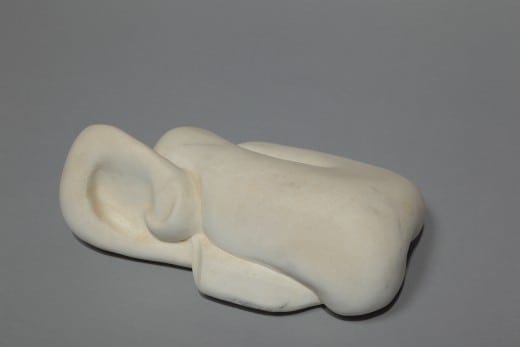 Zuckerman, according to the gallery’s website, is best known for “fluid, figurative sculptures based on universal themes of family, love and protection.” Nothing conveys these ideas as beautifully as a small, untitled sculpture in matte stone the color of linen. Quiet, recumbent and not much larger than a loaf of bread, it perfectly evokes the intimacy of a sleeping body, equal parts male and female, entwined, perhaps, or merely parts of the whole. One end feels concave and ear-like or like the soft hollow of a clavicle, the other hip or buttocks-like. Look for it in the wall case that contains Zuckerman’s photographs and wooden sculptures, but it is so lovely that it deserves a space of its own, especially where it could be viewed from all sides. I’m Knot, a work in satiny bronze from 1974, sinuous and muscular, is the essence of something solid and satisfyingly permanent, like her marriage, perhaps.

Shaft, a vertical piece in bisque-colored stone shot through with rusted iron-like veins, is both phallus and delicate bud. The oval tip, which leans almost imperceptibly to one side, is humanized by a heartbreakingly tiny chip at its very top. Unfurling, graceful in pale grey marble, captures movement — a flickering flame or a dancer uncoiling and rising from the floor — and hints at the idea, even, of sexual union. Both of these are works of balance and becoming, each slightly off center in a way that implies trust. 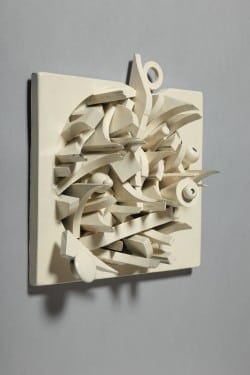 Four painted sculptures, congeries of small wooden elements from the 1960s presented in a glassed-in wall case, are given visual unity by virtue of their monochrome surfaces. Tahkeh, from 1974, a menorah-like sculpture in bronze and stone, resembles an array of Hebrew letters and calls to mind Louise Nevelson’s That Silent Place, 1954-55. Indeed, comparison to Nevelson is unavoidable and apt. Nevelson scavenged wooden forms form debris piles of New York City, selected for their potential to evoke the forms of architecture, nature and celestial bodies. Zuckerman, who worked in 1960s New York, was undoubtedly aware of and influenced by Nevelson’s work. Think Sky Cathedral from 1958, a monumental monochrome in black, and Dawn’s Wedding Chapel IV, in silent white, from 1959-60 on a much smaller scale.

Three of the five photographs in the show appear alongside these wooden sculptures. Included are Zuckerman’s photographs of Big Sur, California; a view of a side street in Venice, Italy; and an Atlanta city street. Artemis believes they reveal a preoccupation with “dense, rich cityscapes layered with ordered and chaotic structures.” This connection is most visible in Make Way for a New Atlanta, in which a shiny, new glass tower looms behind an old building in mid-demolition; it echoes the ordered chaos of the elements of Zuckerman’s sculptures.

Artemis selected the photographs and early studies in wood to be seen in conjunction with Zuckerman’s later, more organic, abstracted forms. It is difficult to consider the undated photos within the framework of Zuckerman’s oeuvre, much of which is also undated. They did little to enhance my enjoyment or understanding of Zuckerman’s sculpture.

But they do speak to a connection between the two artists, as embodied in the juxtaposition of Zuckerman’s photographs with Artemis’ own work in Anamnēsis, on view through December 6. Zuckerman’s Big Sur, California shares a sensibility with Artemis’ Mechaniota: Lure, (2015), a wood and graphite sculpture. So, too, does Zuckerman’s photo Sky Signs, in which white contrails form a celestial X in a bright blue sky in perfect rhyme with the airy geometry of Artemis’ Mechaniota: A Beautiful Dare (2015).

The two artists met in the 1970s not long after the Zuckermans moved to Atlanta from New York City. Artemis writes in her statement that she enjoyed their conversations and was inspired by Zuckerman’s sustained practice. Zuckerman purchased one of Artemis’ wall constructions, similar to those on view in Anamnēsis. 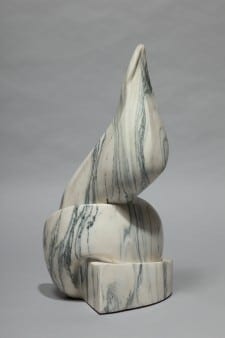 Maria Artemis Selects bears an element of personal tribute. Artemis found her first stone-working tools at the short-lived Bureau of Cultural Affairs Materials for the Arts Program, which dispersed donated materials to artists. The tools she received had belonged to Zuckerman, donated by her husband after her death in 1996. Artemis has paired those tools in a vitrine with a photograph of Zuckerman at work in her studio, streak of silver in her dark hair, staring down the camera — the quintessential woman artist of the ’60s.

In this context, the tools seem to possess a talismanic spirit. An artist’s tools are personal: inert and useless until enlivened by the artist’s hand, when they become an extension of mind and body, helping make manifest intangible thought or inspiration as concrete object. In her statement, Artemis wrote that using Zuckerman’s tools deeply touched her. A thank-you note to Bernie was the only obligation for this fortuitous gift, but with her intelligent consideration of the artist’s work, she has found a way to thank Ruth as well, and to continue a conversation that began long ago.

Maria Artemis Selects: Ruth Zuckerman resonates with the life of an artist and her conversation with stone, wood and bronze made visible by her sculpture. It speaks of the more subtle connection between her sculpture and her photography. Most impactful, however, is the intimate conversation between a living sculptor and the one whose work she has re-vivified in this lovely show.