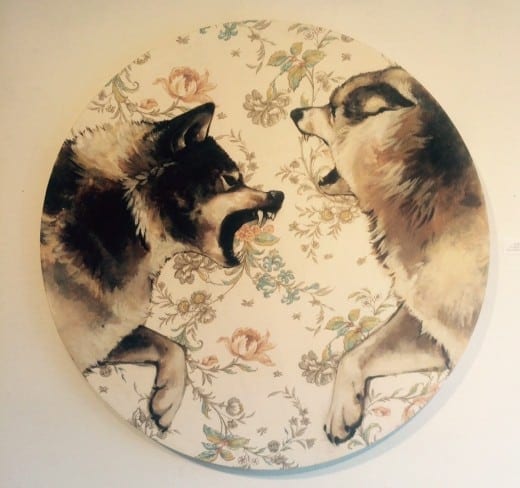 Marcy Starz’s Cold Comfort, at Beep Beep Gallery through September 19, is a mostly melancholic reflection on the human condition, particularly on failed relationships, offset (ambiguously) by what could be read as a spectacular outburst of hope.

Starz’s primary symbols in this body of work, all executed in oils on floral-print bedsheets on panel, are elementary but powerful. Conflict Management I and II both portray a matched pair of snarling dogs, facing off symmetrically in a tondo. The more frequently occurring leitmotifs are human couples in difficult, alienated postures, their bodies represented by voids, and single chairs minus their potential occupants.

Unoccupied is a painting of a wooden chair intersected by an evocative drip of paint that splits it asunder, paint flowing down the panel like tears from a human cheek. Combined with the stark shadow cast by the chair on its otherwise empty ground, it establishes a mood of sadness that the chair alone might not.

End of the Line is probably the strongest painting in the exhibition, compositionally and perhaps symbolically. The piece maintains a visual integrity that isn’t always present in the entangled but partial couples depicted in other works.

A woman holding a telephone receiver curls up in a vintage chair (modeled after one in the artist’s home). The cord of the vintage phone, the last point of connection with the fading relationship, forms a dramatic horizontal line. The woman is faceless, but her posture conveys the drama.

This illustrates the nature of Starz’s dilemma. How does one represent the feeling of hollowing out that comes with the collapse of a relationship without resorting to the obvious (exemplified by Partners, in which a seated pair face in opposite directions)?

Here, the female on the left is almost completely invisible compared to the darkly shadowed figure on the right. Like the voids that replace face or body in other paintings, the imagery suggests couples engaged in mutual erasure, but it requires effort to wrest this information from the imagery. Marcy Starz: End of the Line, oil on repurposed bedsheet.

It should be noted that all the works are shaped panels, mostly tondos or eight-pointed stars replicating the quilting form called the lone star. In the back gallery, an enormous lone star forms the center of a spectacular wall of deconstructed quilt patterns. The diamond shapes that cascade across the wall could be read as exploding outward from the star’s center or about to be consolidated into an intact quilt pattern, ambiguously suggesting both the demise of something and its beginning or repair.