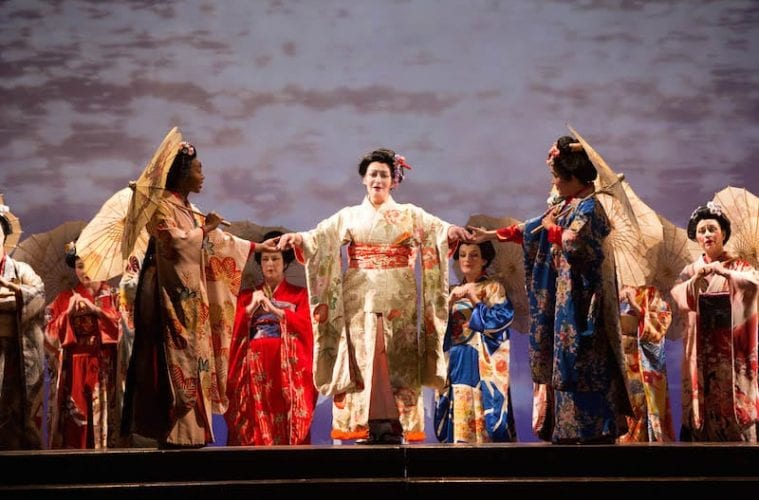 Puccini’s Madama Butterfly, which opened the Atlanta Opera season Saturday, is the first production planned by artistic director Tomer Zvulun, as last season had been assembled and cast before his arrival. Zvulun also works as a stage director, so it isn’t surprising that he chose to direct this one himself.

What is a bit surprising is that his production is so utterly traditional. It’s a simple period approach with the usual shoji screens and kimonos, freshened up a bit with stage-filling projections. The latter — slow-motion movies of the harbor, the sky and Pinkerton’s ship slowly arriving — were generally effective.

At the end, Cio-Cio San’s suicide was preceded by a flow of images, at first subtle then erupting into the color red, an unforgettable coup de theatre by lighting designer Robert Wierzel. But there were lapses when the projections were simply distracting, as when a swarm of jittery butterflies filled the stage, or when we were shown crashing waves during the Love Duet in Act I.

This production debuted in June at the Castleton Festival, a tiny but delightful affair in Virginia horse country. There it was performed in a 650-seat tent with a much smaller stage than that at the Cobb Energy Performing Arts Centre, a potential problem since opera coproductions must be designed to fit the dimensions of the smallest venue. The one thing the two companies would seem to have in common is the need for frugality, as both have smallish budgets.

Erhard Rom’s unit set neatly resolved both issues. It featured a raised central platform with one row of shoji screens along the back, fabric curtain drops to surround the action and fill out the width of the stage, and scrims for projections front and back.

Zvulun’s program notes tell us that although Butterfly is “on the surface, a story about a clash of cultures, what is truly revealed is the rise and fall of a typical Italian heroine.” But the “clash” in question isn’t simply East versus West. Underlying the opera is a dark and jaundiced rumination on American imperialism and the sexual abuse of children by the American navy. (That the opera opened the season, where by tradition it was preceded by the National Anthem, later to echo mockingly in the score, and was next performed on Veterans Day are ironies perhaps lost on most of the audience.)

What rescued the whole exercise from the usual clichés was Adam Diegel’s biting portrayal of Pinkerton. The role doesn’t really work for a traditional sweet-voiced Italian tenor. That isn’t Diegel. Instead, he has a clear, muscular, intense sound, solid from bottom to top. His Pinkerton is caddish in a youthful, lusty, supremely confident way, and when he is confronted with the disastrous results in Act III, he collapses in an explosion of remorse.

He usually resembles a young John Travolta, but in his makeup here he looked plausibly Asian. This was probably an accident, but it did suggest something about the universality of nationalism gone amok. The opera takes place at the turn of the last century in the era of presidents McKinley and Theodore Roosevelt. As that century unfolded, both Japan and the Italy of Puccini and his librettist lost any claim to the higher ground in this matter.

Our Cio-Cio San, Dina Kuznetsova, is the sort of singer who commands attention on stage. Unfortunately, the reasons aren’t all good. The ideal Butterfly should be innocent, fragile and plausible as a 15-year-old. None of this describes Kuznetsova. That said, she almost managed to pull off a totally original alternative Cio-Cio San by force of will.

She has great charisma and a huge, ringing voice with a clarion top. She can portray powerful emotions just with her voice. Her “Un bel dí” was inspired, if a bit rushed. But she has an alarming tendency to come up flat. And her physical portrayal is overcooked and unconvincing: an evening of cutesy eye-rolling and exaggerated hand gestures. Kuznetsova is a work in progress with considerable potential if she can bring a degree of discipline to her voice and characterization.

Mezzo-soprano Nina Yoshida Nelsen sang the role of Suzuki with convincing compassion and a refined voice, holding her own in the Flower Duet. As Sharpless, Corey McKern revealed a pleasant lyric baritone voice, but struggled with intonation. Jason Ferrante was a suitably irritating Goro, and Joseph Lattanzi turned in a nicely nuanced performance as Prince Yamadoro. Bass-baritone Kyle Albertson was a satisfying Bonze. The entire cast was new to Atlanta Opera except for Ashley Curling, who held her own as Kate Pinkerton.

Music director Arthur Fagen, who conducted, appeared to be holding things back almost until the end. This seemed unnecessary, given that both principals had powerful voices, though it did have the sacrificial effect of accentuating the sound from the stage. It also added to the contrast with the run-up to Cio-Cio San’s ritual suicide, when he had the percussion section at triple forte. Still, a more balanced approach would have given us a richer sound all night.