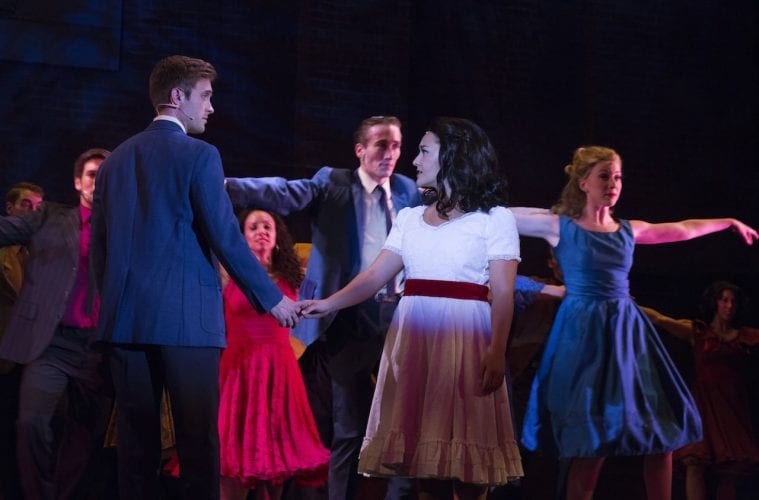 It’s no fluke. What seemed like a Sondheim kind of theater season a few months ago has turned into an unexpected (albeit unplanned) local celebration, with an emphasis on some of the master composer/lyricist’s more accessible work. Actor’s Express kicked off the year with Sweeney Todd, then Aurora Theatre followed suit with a beautiful take on Into the Woods, and Actor’s Express will be staging Company next month. Currently playing as part of the unofficial 2016 Sondheim ATL tour is West Side Story, getting a splashy, mostly solid staging by Atlanta Lyric Theatre, in a production playing through June 26 at the Jennie T. Anderson Theatre in Marietta.

The show’s notorious score — with lyrics by Stephen Sondheim and music by Leonard Bernstein — features some of the best known and loved numbers of all time, as haunting now as when they were first heard. The Lyric’s version of the classic overcomes some rough edges and a shaky bit of casting to get the job done.

It’s the classic tale of the rival gangs the Jets and the Sharks in mid-1950s New York, inspired by Shakespeare’s Romeo and Juliet. Young Tony (Tim Quartier) — who used to be a Jet — falls for Maria (Katie Mariko Murray), the brother of Bernardo (Chase Peacock), the leader of the Sharks. The two meet at a neighborhood dance and their attraction is almost instantaneous. It’s an age where no one would tolerate their relationship, however, and ultimately it all leads to tragedy.

This version is directed by Alan Kilpatrick, a veteran with the company who alternates between performing and working behind the scenes. Kilpatrick certainly knows his way around a musical. Yet the first scenes seems rocky, a little out of rhythm, and Quartier’s version of “Something’s Coming” is tame.

Ultimately, though, this production does pick up considerably. Kilpatrick has gathered a versatile ensemble. The rest of the various gang members include Nathan Lubeck (Riff), J. Koby Parker (Big Deal), Nickolas Eibler (Baby John) and Avery Gillham (A-rab). They are all commendable, even if some are better equipped to handle the material than others. The Jet’s rendition of “Gee, Officer Krupke” is particularly lively.

Also making an impression is Chelsea Belcastro, who plays Anita. Her version of “America” is arguably the show’s standout number. As well, Chani Maisonet sings a powerful “Somewhere” in Act II but the scene would be more effective had Kilpatrick kept it simpler and the action around it less busy.

If there’s one problem, it’s with this Tony. Quartier is somewhat miscast here. With his matinee idol looks, he seems nothing like a former gang member; his Tony would fit in more comfortably with the teenagers of Hairspray. Co-star Peacock might have been an edgier lead. Yet in his defense, Quartier has so much charisma and talent that he makes it work. And as he showed in this season’s The Light in the Piazza — the Theatrical Outfit musical that he almost stole — he is terrific at playing lovelorn young men. Murray makes a lovely, innocent Maria, and the two performers click as a team. Their “Tonight” duet is another highlight.

Choreographer Cindy Mora Reiser does an exemplary job with the dancing. As always, this is a musical with a lot of movement and the cast is suited for it, in some rather complicated numbers. Eric Alexander serves as the music director, overseeing an orchestra that nicely complements the actors, even if at times the orchestra seems a bit off.

The musical, which bowed on Broadway in 1957, spawned an extraordinary film version. The material seems as timely as ever, with its themes of racism and a call for peace amidst violence.

Save for an uneven version of Dreamgirls this spring, it’s been a robust season so far for Atlanta Lyric Theatre, including The Full Monty and a wonderful Young Frankenstein last fall. Anyone who’s a sucker for West Side Story will likely enjoy this as well.