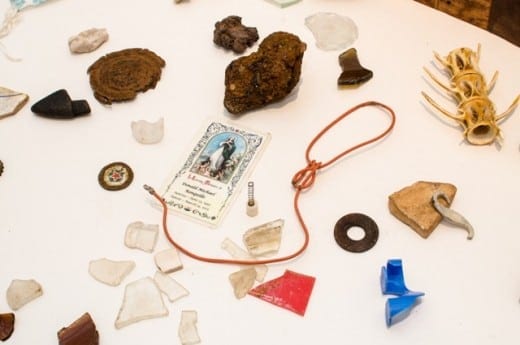 Lucinda Bunnen Detritus from My Walks in Kauai,” 2014. (Photo by Virginie Kippelen)

In the fall of 2014, Lucinda Bunnen mounted the introspective exhibition Lucinda’s World, at Mason Murer Fine Art. It was an astonishing display of her photographic work, a salon-style event mixed with personal memorabilia that included furniture from her home as well as personal snapshots that were free for whoever wanted a printed slice of her life.

The show was well received, and friends asked her to expand it. The 80-something, widely respected photographer, collector and art patron assented. “Heck, I have nothing to hide, so why not share my exciting life,” she wrote in an email.

Thus was born A Collection of Collections, the middle of what has become a three-part series. On view at Swan Coach House Gallery through February 20, it will be followed by Weathered Chrome at Marcia Wood Gallery, starting May 21.

Collections reveals her penchant for collecting — anything — through a series of 27 photographs. The project began when she was stuck at home during last winter’s cold spell. “Each collection came to me as I started looking around the house,” she wrote in her artist’s statement.

In a home filled with art, the process ironically started with a bag of junk. She decided to make a photograph of the stuff she had picked up during walks taken during a Hawaii vacation. That jump-started the process of seeing other collections as aspects of her life.

Although her collection of cameras — a large photograph of dozens of them, old and new, acquired over 45 years — takes center stage here, many of the collections, like the Hawaiian souvenirs, are mundane objects. There are beads in all shapes and colors; pine cones, large and small; heart-shaped stones; shells from everywhere.

A vast display of artifacts complements the photos on the gallery walls. A couple of ceramic cows stand by the photograph of her miniature-cow collection (Bunnen grew up on a farm).

Her late husband Robert Bunnen’s love of Coca-Cola is embodied in a large photo of her soda-related acquisitions; Coke bottles and memorabilia sit next to photos of her Coke collection. His obsession to have “everything locked up” sparked her amassing of old locks.

Bunnen met the challenge of composing these photos by using two devices: organizing neatly or piling up. Her surreal collection of pocket knives is tidily lined up, for example, while those of money, plates, personal pictures and journals are in presented in clusters. The piles extend beyond the frame, suggesting an overflow, an uncontrolled abundance.

The most curious and intriguing pieces are in the vestibule. In A Collection of Tree Photos Assembled on a Window, Bunnen pasted black-and-white pictures of trees on a window overlooking woods and took a color shot through the window. Though striking, it is hard to make visual sense of it.

Another head-turning photograph is composed of pictures of Violet Chachki, a renowned drag queen of the Atlanta scene, modeling Bunnen’s vintage clothing — another collection, although that was not on her mind when she took the pictures.

Then there is the photo of chanterelle mushrooms, visually cohesive and beautifully executed. “The day I picked the chanterelles, I could not resist calling them a collection,” she wrote.

If the photos are a bit repetitive, they make that case that collecting and photography are two sides of the same practice: looking. And they demonstrate Bunnen’s ability to turn ideas into works of art.

Lucinda Bunnen and Brett Abbott, the High’s curator of photography, will speak about the works on February 12.