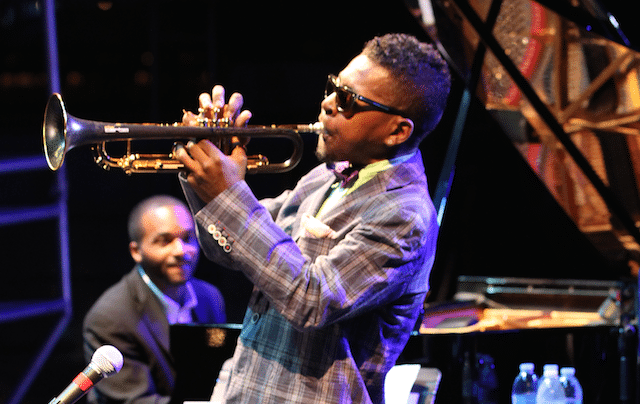 Trumpeter Roy Hargrove seemed to be in good spirits. It was the second day of the 37th Atlanta Jazz Festival, held last Friday to Sunday in Piedmont Park, and the trumpeter and pianist Sullivan Fortner were set to council attendees during a 2 p.m. masterclass.

The masterclasses, a new addition to this year’s three-day festival, presented some of the best artists from the main events in an intimate setting. Earlier in the day, vocalist Roberta Gambarini, who opened the festival on Friday afternoon with an hour-long set of standards backed by Hargrove’s quintet, had held a class of her own.

Fortner and the rest of Hargrove’s quintet closed down the show Friday night with a blistering set of up-tempo tunes, a smattering of ballads played by Hargrove on the flugelhorn and even a hint of the bandleader’s vocal styling on “Never Let Me Go.” Both were wide-eyed and ready to impart knowledge to the Saturday afternoon audience.

First, however, Hargrove had something to teach his pianist. Without the aid of sheet music, the trumpeter showed a new tune to his pianist, singing once through the chord changes. The pianist ably and bravely soloed over the brand new material while Hargrove listened along with an audience of 30 or so attendees.

After playing the new tune, Hargrove talked with attendees about everything from playing by ear, his upbringing in Texas and working as a touring musician. After some gentle prodding, the trumpeter even reprised his role as a vocalist, singing a version of “September in the Rain,” accompanied solely by his pianist.

The entire festival had the same carefree, informal feel to it from the start of Gambarini’s set on Friday, continuing until the last notes of pianist Ahmad Jamal’s groove-driven performance Sunday night. In past years what has been a four-day festival was a bit scaled down this year, and artists seemed to play for a shorter amount of time. A set by vocalist Freddy Cole on Sunday ran long only because Cole played right up until he was cut short by the MC. On Friday night, Hargrove jumped in during the postconcert announcements to dedicate a final song to the Atlanta audience.

This streamlined approach to the sets could have meant attendees would have more jazz available to them — in theory, shorter sets would lead to more artists — but the set breaks were inordinately long. Nevertheless, main stage sets throughout the weekend by Hargrove, Cole, Jamal and guitarist Bill Frisell — who gave the crowd an enchanting, atmospheric selection of music — left audiences with a heavy dose of high-quality jazz.

Hidden gems appeared on two smaller stages spread throughout the park but because of the setup, it was difficult to leave the main stage to catch a bit of another artist without missing out on anything. Such is the curse of large festivals, however.

On Saturday, Atlanta jazz hero Brian Hogans led a swinging quartet on the stage reserved for local musicians, just before former piano wunderkind Eldar Djangirov led his own trio through a mix of heady originals and peppy standards on the International Stage. On Sunday, French singer Cyrille Aimée proved herself to be one of the most engaging artists at the festival. Aimée, who sang in French, English and Portuguese, has a sunny, light voice that drifted atop her brilliant backing band, which was augmented by two electric and acoustic guitarists.

Vocalist Ester Rada, an Ethiopian singer raised in Israel, takes the top prize for overall performance, though, as her Saturday afternoon set on the main stage epitomized what the entire festival is about. Rada, backed by a seven-piece band, has fun with her own blend of ska, reggae, world music, dance beats and jazz, and gave the audience tune after tune of feel-good party music. Shaking her shoulder-length brown hair as she twisted and turned around the stage, she sang tunes that were jazz adjacent, but never quite committed to one genre.

As in years past, the Atlanta Jazz Festival had more of a family hangout atmosphere than a listening vibe, but if quality international artists keep making their way to Atlanta for subsequent festivals, I for one won’t mind at all. Perhaps next year, though, officials will downgrade the massive space in front of the stage fenced off for corporate VIPs, which would allow those on the front row to be a little closer to the action on stage.