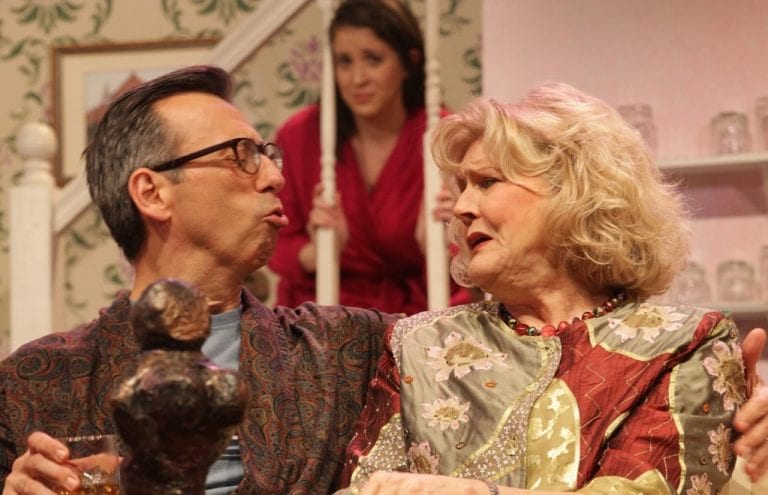 Mark Cabus and Karen Howell gamely try to do a lot with a little. (Photo by Dan Carmody/Studio 7)

Review: Lewis Black–penned play has “One Slight Hitch”: it feels too much like a generic sitcom

Most people who know comedian /actor / social critic Lewis Black know him from his various rants on TV. What many may not know is that he’s a veteran playwright as well, responsible for penning more than three dozen plays. Georgia Ensemble Theatre is staging one of Black’s works, the comedy One Slight Hitch. As directed by Alan Kilpatrick, it’s a farce that never meets its potential.

Running through January 25, One Slight Hitch revolves around one memorable day at the suburban Cincinnati home of Doc (Mark Cabus) and Delia (Karen Howell) Coleman. It’s the summer of 1981, and 16-year-old P.B. (Bekah Medford), with her Walkman in heavy use, tells us about her family — and an upcoming wedding.

P.B. is the youngest Coleman sister; the oldest, Courtney (Kelly Criss), is getting married. Courtney has broken up with beau Ryan (Jeremy Wood) awhile back and is now set to wed the more mature, responsible Harper (Matt Felten).

As the family preps for the ceremony, Ryan appears at their door, hiking in from out of state and not aware Courtney is getting married. At first, courtesy of Doc, Ryan hides in the bathroom and then the closet. The family members slowly learn of his presence.

Courtney is not happy Ryan is there, but it’s also clear that she is not entirely convinced her wedding is a great idea. Meanwhile, Melanie (Jennifer Alice Acker), the middle sister, finds a half-naked Ryan downstairs and has more on her mind than the outdoor nuptials.

To be fair, One Slight Hitch is interested only in being a broad comedy. It’s not looking to tackle world issues or make a statement. Yet even the best comedies and farces are grounded somewhat in logic and plausibility. One Slight Hitch feels rushed, like it was written between gigs, and completely unrealistic.

It makes no sense, for example, that Ryan would hide in a closet for 15 minutes while the three sisters talk about the big day five feet from him — and then act surprised to hear about the wedding once he and Courtney connect. Or that his character wouldn’t have the decency to grab something from the closet or Doc, and cover himself in front of the family in light of an upcoming wedding. (He walks around in his boxers while he washes his clothes for the last half of the comedy and it’s supposed to be funny). Or that no guests at all would be in the house hours before the big day. And so on.

Kilpatrick does everything he can to make this work. He has a wonderful sight gag at the beginning of the show. Every so often, as well, he interjects a 1980s tune into the proceedings. Yet it doesn’t feel like the type of production Black would be associated with. A few lines of dialogue are witty and pointed, but for the most part this has a generic sitcom feel, with several underwritten characters and a wasted premise.

The director does have an eager cast. Cabus, in particular, is a fine, versatile actor (with a key role in the current Selma) with a calming presence. He has a real flair with physical comedy. Cabus and Howell make a believably flummoxed father and mother. Howell has comedic timing as well, even if the director lets her go over the top at the end of Act I.

Yet some characters seem unreal. The cards seem especially stacked against Harper — he seems so stiff it’s no wonder Courtney has second thoughts. Wood brings an initially amusing slacker quality to Ryan, but the character is so out of touch with others it’s hard to sympathize with him. And young Medford completely overdoes it as P.B. Kilpatrick can’t rein her in.

One Slight Hitch is a very old-fashioned, square production that just doesn’t work. Coming so soon after Georgia Ensemble Theatre’s elegant take on The Elephant Man in the fall, it feels like a significant step backward.