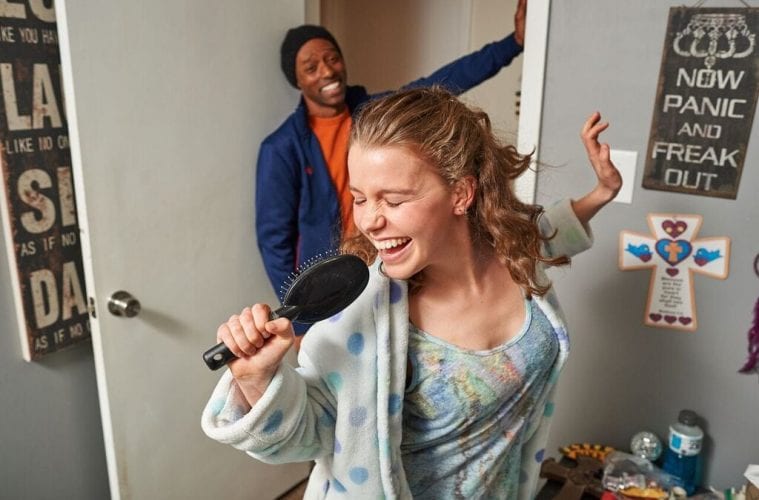 Review: Lauren Gunderson’s “I and You” reminds how its the “biggest little” that often matters

In Decatur-native Lauren Gunderson’s new two-character play I and You, running at Aurora Theatre through February 21, the character Anthony (J.L. Reed) enters speaking the words of Walt Whitman: “I and this mystery here we stand.”

His unexpected arrival in the bedroom of his bedridden former classmate Caroline (Devon Hales) is, in fact, something of an unpleasant mystery to her. It takes the characters a few moments to sort out the initial dilemma: Though Caroline has been absent from school for many months due to a serious illness, Anthony has come to get her help in completing a homework assignment about Walt Whitman that they’ve been tasked to do together for English class.

Anthony is friendly, fun and outgoing — we eventually learn that he volunteered to partner with Caroline for the group assignment — but Caroline is spiky and resistant, even pointlessly cruel. Still, they slowly settle in to work on the task at hand, diving into Leaves of Grass, opening up about themselves and eventually uncovering a far deeper mystery about their relationship. (Spoiler alert: Gunderson’s late-play plot twist is so clever and curious that it actually became the subject of a recent New York Times article). The two young actors do a fantastic job of conveying their characters’ shifting relationship. Hales as Caroline resists easy sick-girl sympathy, giving the character an edge of convincing fatalistic nastiness. Reed’s Anthony is believably undeterred, optimistic and dogged in the face of Caroline’s resistance.

A play about a sick girl and her classmate bonding over Whitman sounds excruciating, I’m aware of this, but it’s very much to Gunderson’s credit that the play is seldom that way at all. The slowly developing friendship and the use of Whitman are effective, if somewhat predictable (in a play about two teens in a room, it is, after all, a safe bet that their initial enmity will begin to crumble and they’ll bond Breakfast Club-style).

Still, the various machinations are swiftly dispatched and nicely enacted, and the nature of the final plot twist does indeed come as a moving surprise (even when the fact of it has been reported in the Times).

All in all, in a month of big shows and major productions around town, I and You is a nice reminder of how little in terms of cast, costuming, scenery and so on is needed to create a moving and exciting work of theater.

That, in the end, may be the play’s largest and most gratifying surprise of all.