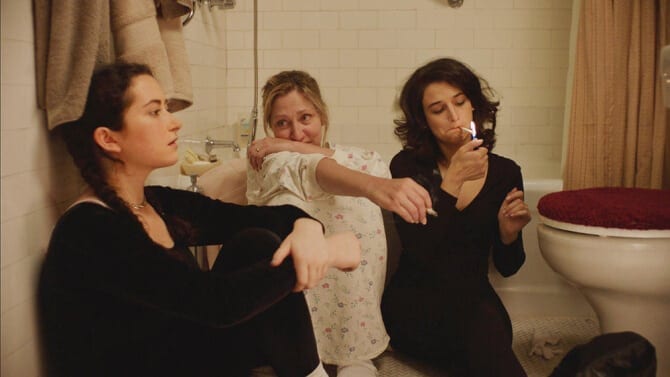 Review: “Landline,” “Escapes” are throwbacks of the best kind, films that enthrall and engage

It’s easy to like Landline simply because it exists; movies like this rarely seem to get made any more. The kind of witty, character-driven, low-budget indie film we took for granted in the ’90s and early aughts, it’s even set in Manhattan of 1995. If anything, though, it seems to harken back to the 1980s, to Woody Allen in his Hannah and Her Sisters heyday.

It’s kid sis Ali who sets the central story in motion, discovering on her computer (on an old-timey Apple diskette) a stash of raunchy poems and letters addressed by her dad to a mystery woman referred to only as “C.” In one plot thread, Ali and Dana try to discover who this jezebel is, their amateur sleuthing a little reminiscent of Manhattan Murder Mystery. But now I should lay off such comparisons, because Robespierre and co-scripter Elisabeth Holm give their movie a female-centric tone that’s edgier and more contemporary than any Woody Allen film.

If Turturro’s Alan is (or may be) a philanderer, he’s not alone. One of Landline’s strengths is that it gives agency to its women to act just as badly as the men. So when Dana runs into her cute old high school classmate, Nate (Finn Wittrock), you know there’s some dirty trouble ahead. Balancing lust with her sense of duty toward nice-guy Ben, Slate is fun to watch. She’s adorably nerdy, snorting when she laughs, and she makes the character believably flawed — capable of committing crimes of the heart but also willing to make amends.

Ali, played sharply by Quinn, is also nicely developed as a young woman trying on rebellion for size (sneaking out to clubs), while also learning from her dad and sister’s mistakes to guard her heart while enjoying a with-benefits friendship with classmate Jed (Marquis Rodriguez). Turturro is reliably good as a lovably impossible semi-loser. (A private reading of his latest, awful play is a highlight.) Falco is fine as always, though the movie could have used more of her, saving her best work as a kind of secret weapon in the last half hour.

On the minus side, even while you’re enjoying Landline’s succession of pungently written scenes, the movie feels like it could use a stronger sense of forward momentum. You may come to realize that one of the reasons we don’t see a lot of movies like this any more is because television has become home for the best screen writing and acting, yielding the multiplexes to the comic-book franchises and raunchy comedies.

Minor but sweet, Landline never explains why it particularly needed to be set in the ’90s. But it’s fun to revisit this near-but-distant world of boom boxes and mix tapes, when people spoke to each other on the street instead of walking along staring at handheld devices.

Opening August 11, Escapes is also a kind of return to the past. A jazzy, swift documentary about the sort of person only Hollywood could produce, it centers on one Hampton Fancher. That’s his actual name, even if it sounds like the fake kind of moniker studios often attached to starlets and beefcake boys.

Allergic to academics, at age 11 Fancher told his parents he wasn’t going back to school. And didn’t. At 15, he pretends he’s an adult, ships to Barcelona, then travels to Madrid where he studies ballet and flamenco. A year later, back in L.A., he gets a job dancing at a local theater, has an affair with a cop’s wife and heads back east to start a dance company in New York, where he “lives briefly with a schizophrenic lingerie model.”

But wait, the story — in seven chapters with a coda — is just starting. Director Michael Almereyda is a career-long experimenter; check out his moody lady-vampire flick Nadja, or his modern-day Hamlet with Ethan Hawke, Kyle MacLachlan, Bill Murray and the dearly departed Sam Shepard. He’s good at turning what could have been a seesawing, rags-to-riches-to-rags-and-back-again saga into something cinematically interesting.

What’s impressive is the ways Almereyda uses clips from the many, generally B-grade TV shows and movies (a lot of them Westerns) Fancher acted in to serve as emotional illustrations of the stories he’s recounting. In fact, the current-day Fancher doesn’t show up onscreen till around the half-hour mark.

He tells us about the improbably, only-in-Hollywood start of his mediocre acting career. An actor-director named Bruno VeSota spies him at the corner of Sunset and Fairfax and yells, “Hey, Wolfboy — want to be in a movie?” Thus, Fancher turns up, uncredited, in 1958’s The Brain Eaters. There followed guest turns in Bonanza, Perry Mason, Adam-12 — just about any ’60s or ’70s TV show hiring day players. He also does day labor with migrant workers, romances Teri Garr (whose young career soon outstrips his own). Then comes a quickie marriage to Sue (Lolita) Lyon while she was filming Night of the Iguana, followed by a longtime relationship with Barbara Hershey, whom he tempted away from young grasshopper, David Carradine.

What will lead Fancher’s obituary, though, will be his cowriting of the screenplays of Blade Runner and its sequel, due in October. How he got the rights to adapt Philip K. Dick’s source novel is one of the more convoluted stories in the documentary. When shopping online, always try to keep in mind the price of shipping. Many sites offer free shipping on orders over a certain amount. In the event that you do have to pay shipping, make sure that it is going to fit into your budget after you’ve added everything to your cart. Having a full cart only to find out you cannot afford the shipping is never a fun experience. Be wary of overdoing it or use currency converter online. It is much easier to overspend when you are shopping online. You start to rationalize that you can spend more for those shoes because you saved money on gas and the food you would have gotten if you went to the mall, for instance. Give yourself a limit and stick to it. It involves Fancher’s best pal and Flipper star Brian Kelly, whose career was ended by an accident on Fancher’s motorcycle. Yeah, it’s complicated.

Luckily, Fancher is a captivating raconteur. He’s up front about his own ego and manipulations. That’s especially true of a wince-inducing tale of a one-night stand with a Pennsylvania cinema employee, which he initiated simply to assure the young lady would drive him to the airport in time the following morning. (The story has a helluva payoff.) Still, some of his tales are shaggier than others, and the energy that drives the film’s first half starts to flag near the end.

Recalling a party in Vienna and a stunning woman he and Kelly nickname “the Apache,” Fancher pulls up short, saying, “This story is so terrible, I’m not gonna tell it.” By this point, you may be torn between wishing he would and being glad he’s shown a little discretion.