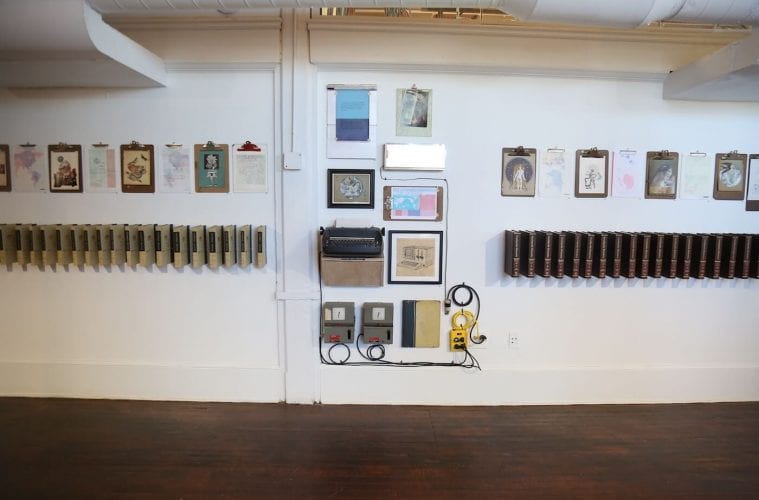 Review: Kofke and Germon prove to be a potent pairing

Jason Kofke and Mike Germon’s Compendia, a Twin Radius exhibition on display at CenterForm through September 1, is a collaborative meshing of new and older works by the two Atlanta artists. This juxtaposition is particularly appropriate and potent, since both Kofke and Germon are known for using images from mid-twentieth-century encyclopedias to comment both on that era’s optimism and on our contemporary condition.

Encyclopedias such as the ’60s-vintage World Book and Encyclopedia Britannica that Kofke and Germon have mounted on the wall tidied up the elements of knowledge into alphabetized summaries. The results are emblematized in Germon’s Volume C, a collage in which the encyclopedia heading “codes and ciphers” is juxtaposed with a head of Christ, a cobra, and the logo “CD” (here, an abbreviation for “Civil Defense” against an atomic attack, not the not-yet-invented compact disc or the slightly earlier bank certificate of deposit). 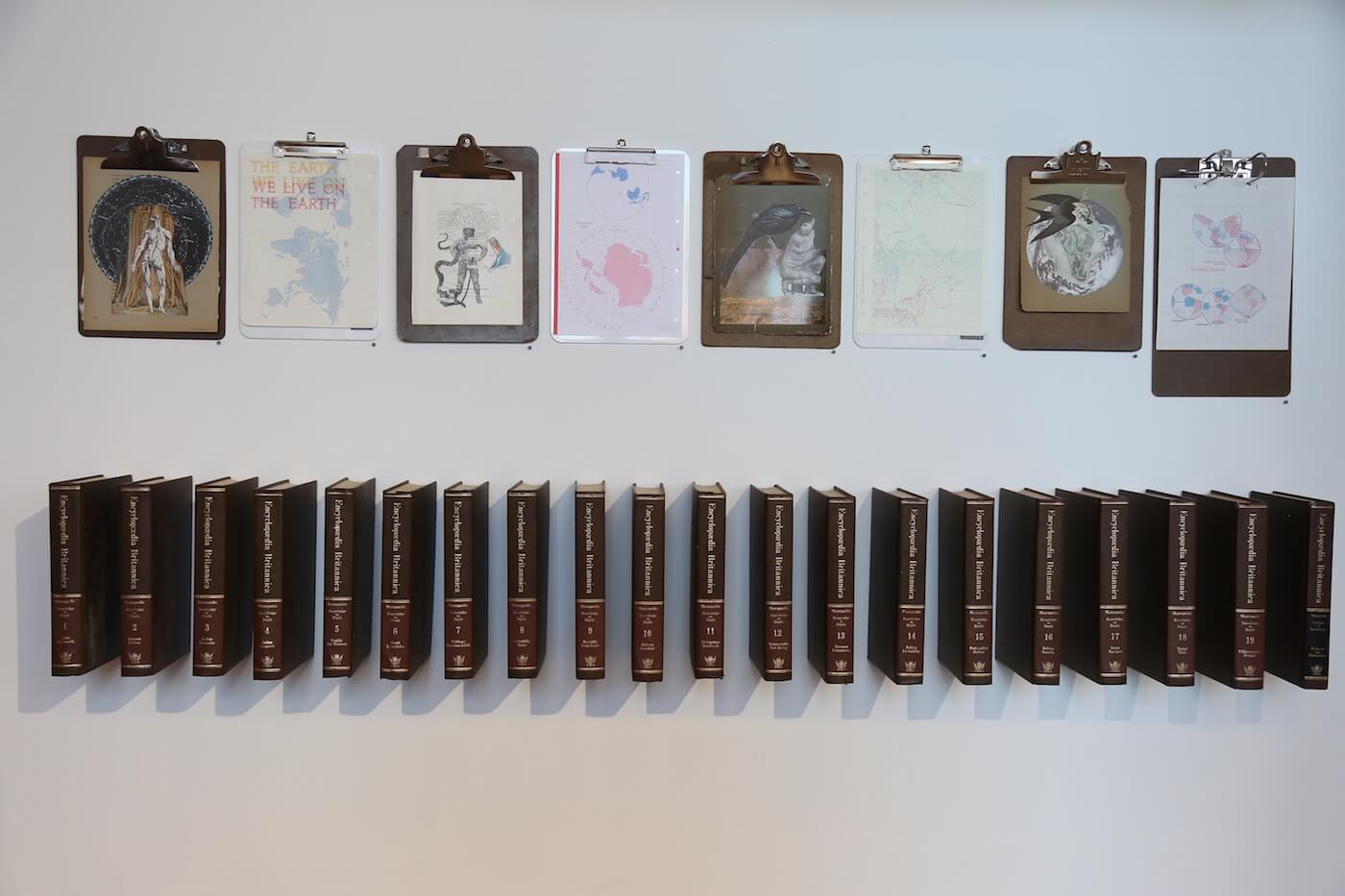 The exhibition, like the encyclopedia, is organized sequentially, although the sequence is much less obvious than alphabetical order. The first object is a collage by Germon titled Neurotransmission, a vintage anatomical diagram of the human brain juxtaposed with the word MIRACLES and a picture of a prism that projects a beam of light toward the eye socket of a human skull, superimposed on a color photograph of a placid river. Germon’s overall hypothesis has thus been established in this initial work: the human mind imposes order on nature by intermediate systems of ideas, of which science and religious belief are two major ones.

Mapping, whether for navigation or geopolitics, is a third one, and that is Kofke’s main theme on this wall. Interspersed with Germon’s visual meditations mixing paleontology, cosmology, neurology and Christian iconography, Kofke’s set of related drawings begin with an outline map of the Americas in blue overlaid on a red-colored outline map of Asia and Australia, and subsequently reproduce encyclopedia illustrations of the relationships of a “global view of the world,” a phrase repeated in several drawings.

That “global view” begins with overlapping outlines of continents, and in later pieces it presents the continents arranged with west at the top of one image, then with east at the top of the next one — a “wrong” or “sideways” arrangement that illustrates the arbitrary nature of flat maps representing the globe of the earth. Hemisphere Projections, the final drawing in the sequence, illustrates various ways of solving the dilemma of representing the continents more accurately.

The larger lesson imparted by this series is that — despite its claims of universality — the “global view” imparted by vintage encyclopedias, or by any system of knowledge, contains unnoticed gaps and misleading representations. Kofke reinforces this view in a multi-level installation that interrupts the sequence of drawings. 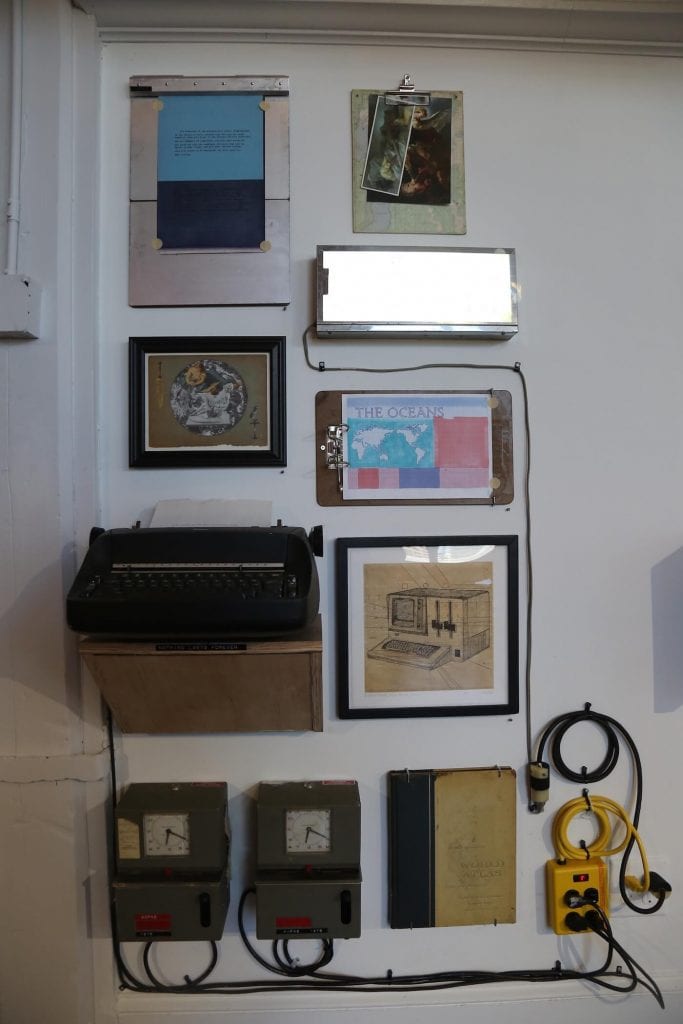 Above eye level on the wall, Plato’s Phaedrus is a typewritten text based on the Benjamin Jowett translation of Plato’s cautionary tale, in which Plato quotes the Egyptian king/god Thamus’s warning to the god Theuth that he should not give humans the gift of writing — “[The invention of the alphabet] will create forgetfulness in the learners’ souls . . . they will appear to be omniscient and will generally know nothing.” Below this sheet of text is a sheet of carbon paper containing the same lines, illustrating the now-antique method by which copies were once commonly created.

An actual IBM Selectric typewriter is installed below this piece, with a sheet of paper containing the sentence, “It is useless to talk about inconsistent things from an inconsistent perspective — no thing is absolute.” The adjacent 1982, an etching of an antique word processor, illustrates the next technological step in the dispersal of memory that Plato prophesied.

Alternating with Kofke’s drawings and prints, Germon’s collages supplement Kofke’s narrative with a parallel narrative of humanity’s effort to impose a sense of order on the unruly multiplicity of the world. Chaos Reigns might be considered a succinct summation, with its combination of a tiger, the planet Saturn and a snake circling an eyeball. The tiger is the literal animal but might also be an allusion to William Blake’s poem “The Tyger,” declaring the frightening creature’s implications about its Creator (“Did he who made the Lamb make thee?”). The ringed planet named for a Greco-Roman god, and the ancient ouroboros symbol of totality encircling the physical organ of vision, might suggest either the collision or the merging of ancient and modern modes of belief and understanding.

Germon places his own significant intervention adjacent to Kofke’s typewritten passage from Plato: a clipboard that overlaps Edwin Landseer’s Man Proposes, God Disposes with Luca Giordano’s painting of the Archangel Michael’s spear subduing Satan. Landseer’s grim painting of polar bears tearing at the flag of a wrecked British vessel reminded Victorian England that Nature’s God could render judgment on the arrogant overreach of the Empire’s explorers; Germon’s combination of images might suggest that an inhuman Nature may be a sufficiently impersonal judge — or that the God of Blake’s “Tyger” is invoked anew in Landseer’s artwork.

This older clipboard-mounted work (clipboards are also used to mount the other works on paper in the exhibition) hangs above not only Kofke’s typewriter but a lightbox and two time clocks bearing the artists’ names. There seems to be a multilayered allusion here to the connection between logic, labor and linearity, a connection also suggested by the wall-spanning line of encyclopedia volumes, but this may be an unpursued line of thought too massive for an already condensed concept-heavy exhibition to bear. 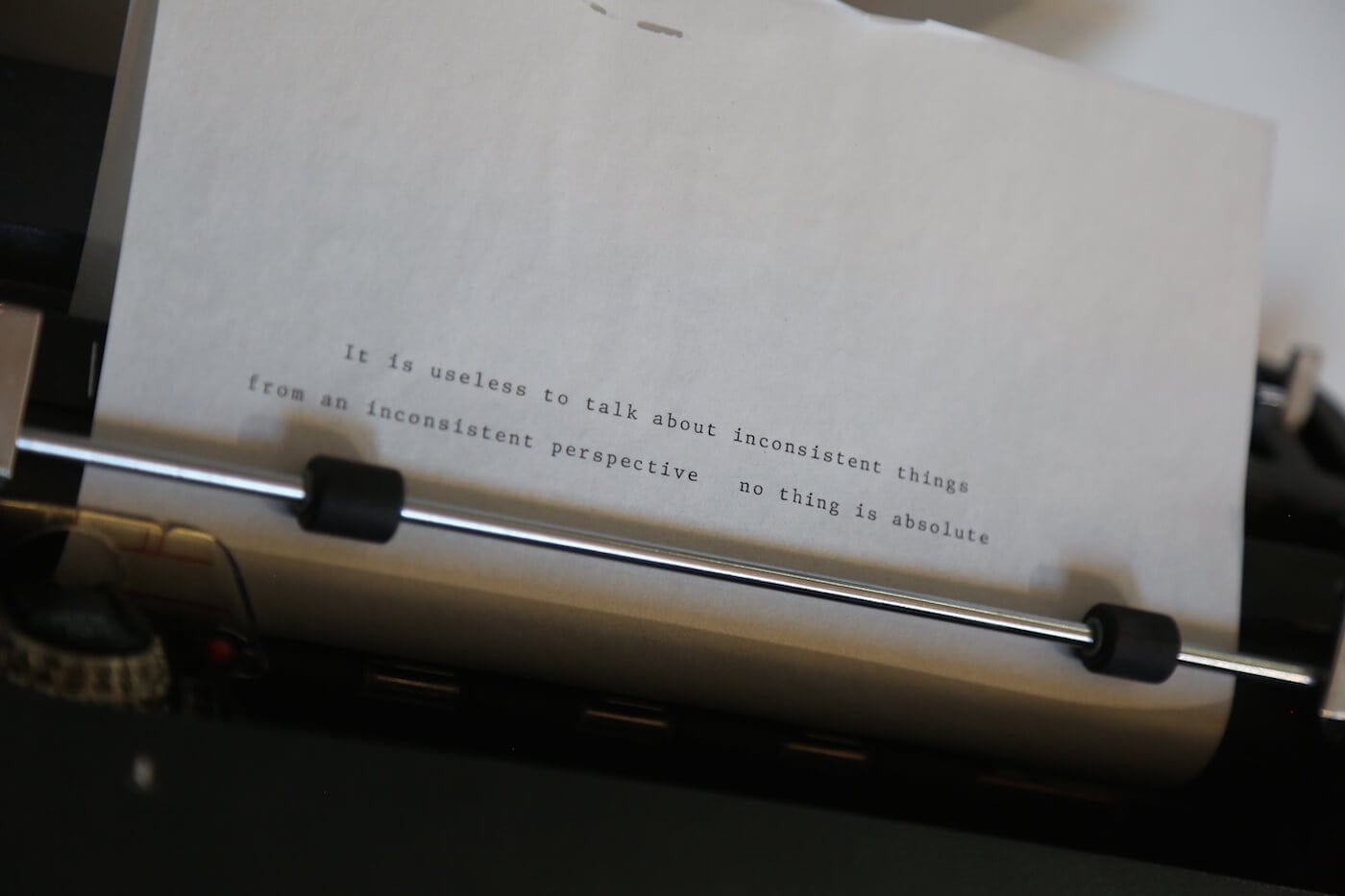 The exhibition reaches a focused conclusion on the opposite wall, as Germon’s Prism reappears, this time filled with snakes that may simultaneously suggest the serpent in the Garden of Eden (which the Gnostic heretics thought was the bringer of saving wisdom) and the literal vehicle of poison that gave rise to so many symbolic interpretations. (This piece relates to Python Reticulatus, in which Germon has juxtaposed diagrammatic illustrations of an astronaut’s spacesuit and a python — both with the parts labeled in the same encyclopedia typeface.)

Kofke, however, has the final word on the compendia of knowledge and the connections they failed to make, in Auditory, Visual, Haptic, a mixed-media piece in which “hearing” is represented by an improbable-looking mobile telephone, “seeing” by a typewriter and its carrying case and “touch” by an automatic rifle.

That resonant ending, in itself, suggests the range of possible future compendia to which this small show could give rise.