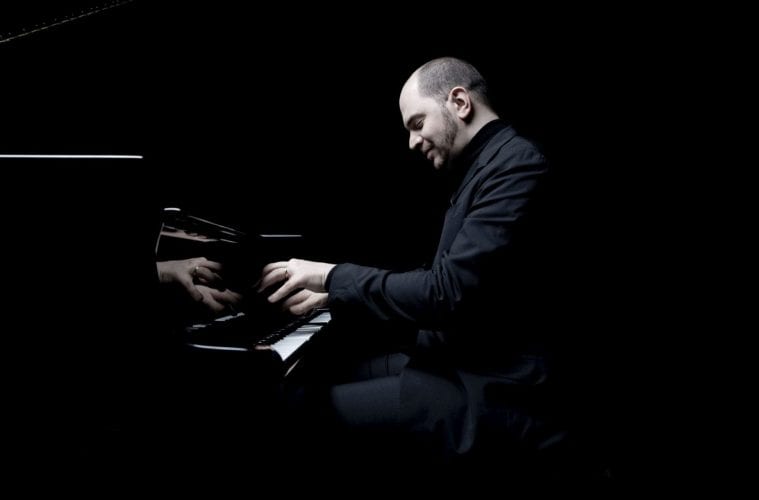 On Sunday’s warming sunny afternoon, pianist Kirill Gerstein played a solo recital of music by Bach, Debussy, Chopin, Adès and Brahms at Spivey Hall, offering up a wide range of classical repertoire performed with a good balance of head and heart. The program also marked the debut of “Robert,” Spivey Hall’s new Hamburg Steinway piano, acquired as a complementary companion to its resident “Clara” Hamburg Steinway and unboxed on Boxing Day after its air flight from Amsterdam.

Atlanta audiences will remember Gerstein from his appearance last January with the Atlanta Symphony Orchestra, led by principal guest conductor Donald Runnicles, when he performed a less-familiar early version of Tchaikovsky’s well-loved Piano Concerto No. 1, then returned to the stage for a surprising encore, Rachmaninoff ’s “Romance” for six-handed piano, with Gerstein, Runnicles and guest composer Marc Neikrug sharing the keyboard together.

Gerstein opened his recital with a set of four keyboard Duettos by J.S. Bach. They are essentially two-part inventions, and are published in Bach’s Clavier-Übung III, a substantial collection of various organ pieces based on church chorales, except for the puzzling addition of these four Duettos at the end, which are unlike the rest of the volume. They are the only two-part compositions in the book, only two pages long each, written for an unspecified single-manual instrument and not tied to any hymn tune or liturgical purpose. Gerstein’s performance was clear, well-voiced. At times his playing became rather punctuated in character, not quite spilling over into hammering, but hardly shy.

In great contrast was Book I of Claude Debussy’s Préludes, where the new piano’s character was allowed to really shine. Gerstein’s performance of the dozen works in the set captured the full range of its expressive diversity, from intimately thoughtful to brilliant, evoking images, from lithe and witty to grandly cinematic in what might be described as a “painterly” sonic manner.

Likewise, brilliance marked the beginning of the program’s second half, with three waltzes by Frédéric Chopin, each taken from a different set: the waltz in F major, Op. 34 No. 3 (known as the “Valse brilliante”); a waltz in E minor, Op. Posthumous; and Waltz In A-Flat Major, Op.42.

Those led to Thomas Adès Three Mazurkas, Op. 27, written in 2009, which neatly followed as a kind of contrasting contemporary companion to the Chopin waltzes, taking the distinctively Polish mazurka dance rhythm as their creative starting point. Despite Adès’ non-tonal harmonic language, it was his voice-leading and observable linear patterning that made the pieces more convincing to the ear. The first was most obviously tied to familiar mazurka rhythms; the flowing triplets of the second movement disguised them in its more liquid lines; the final one slow, with a darker dignity and a paced, step-wise descending motive brought out by Gerstein guiding the ear throughout to the piece’s increasingly subdued, quiescent end.

Although the rest of the recital was memorized, for the Three Mazurkas Gerstein played from a digital score, using an iPad Pro with a Bluetooth-connected foot pedal for “turning” pages on the screen, and forScore software. After the concert, Gerstein spoke enthusiastically with ArtsATL about his digital rig. He said that his preference, of course, is to memorize his solo and concerto repertoire, but he likes using the iPad for chamber music and some contemporary solo works, eliminating the need for a hovering page turner, allowing the timing of such turns to be directly under his own control.

The youthful Piano Sonata No. 2 in F-sharp minor, Op. 2, of Johannes Brahms, written when he was 20 years old, concluded the formal program. I’m a big fan of Brahms, but more of his later, more mature and autumnal works. I was hoping for music that would capture more of the flair of the Debussy pieces — perhaps something by Ravel, with a bit more bite, would have achieved my instinctive preferences of the moment, but Gerstein made good work of the Brahms Sonata, concluding the second half on musically solid ground.

Gerstein returned to the stage for two encores, Franz Liszt’s showy Transcendental Etude No. 8, followed by the more contemplative “Melodie,” Op. 3 No. 3. by Sergei Rachmaninoff.