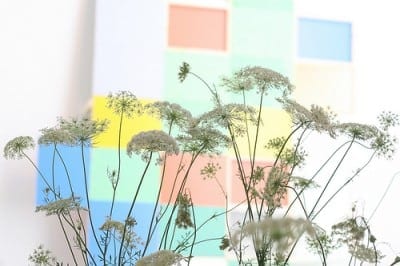 In “Small Pieces, Loosely Joined: a unified theory of the web,” author David Weinberger hypothesizes that the Internet is changing the way people process information. We are, he says, leaving a system in which information was organized and experienced in a logical and chronological order and entering a world in which links allow us to sample information from different sources at a rapid rate.

“The web has blown documents apart,” Weinberger writes. “It treats tightly bound volumes like a collection of ideas — none longer than can fit on a single screen — which the reader can consult in the order he or she wants, regardless of the author’s intentions.” 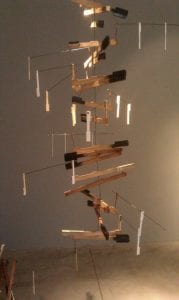 Borrowing the book’s title, curator Karen Tauches translates these ideas into an exhibition of sculptures, photographs, videos and installation at Kiang Gallery, which share a common trait: all eschew a single vantage point or prescriptive concept.

Perhaps the clearest example on view here is a wall piece by Christian Bradley West, comprising  a loose arrangement of 28 small graphite drawings scattered across the wall. Each drawing is a detailed copy of a found photograph from a collection he has accumulated over time. The unconnected scenes range from a bird in flight and people standing on a cliff to a couple walking on the beach. The meaning is vague (the fact that the work is untitled only adds to the ambiguity), but there is a sense that comes from the overall assemblage: a feeling of flight, soaring, movement, freedom that somehow evolves as you look at the images.

This clustering of objects to create a loose idea occurs in a number of the other works. Judy Rushin’s “Carapace” leans against a wall, an assemblage of rectangular panels that highlights differences in color, pattern, material and texture. Annette Gates sprinkles 100 small and varied biomorphic porcelain objects across the wall in “Cross Pollination (Veiled Diffusion).” In “Secular With Nine Paintings” (below), Mark Brotherton’s eight small black-and-white paintings float in orbit around a striped color canvas, looking much like an iPhone Quick Response code. And the spiral configuration of piano keys in Amandine Drouet’s untitled piece, which trips across the floor and hangs from the ceiling, evokes the feeling of fractured segments of DNA shifting in space.

Another group of works seems to explore the idea of multiple perspectives. Ben Steele’s three luscious oil paintings all feature the same suspended sculpture. But by varying the angle and looking through a prism as he paints, Steele distorts and fractures each view in a unique way. Other artists seem to collapse space altogether, as with Inkyoung Chun, whose deft manipulation makes it impossible to discern which busy layer of imagery is built upon the next in her watercolor “Songpyeon.” Carolyn Carr’s “Folie á Deux,” a spare acrylic on canvas, and Rushin’s untitled works on paper play with a similar dissolution of space but in a more subtle fashion, inviting us to float in and around their elegant compositions. 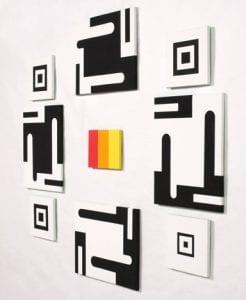 Karen Brummund and Jan Vormann examine the ideas of evolution and permanence and, by extension, our place in that scheme. Brummund provides a small time-lapse video of the installation and disintegration of her 2009 photo-collage work “Casa Poli.” (Atlantans may recall a similar work she did for Atlanta Celebrates Photography’s public art project last year.) The video shows the artist affixing sheets of paper to a window, which, when assembled, reproduce a historical photo of the view through that window. Subsequently, the wind slowly blows the pages away, revealing the reality of today. 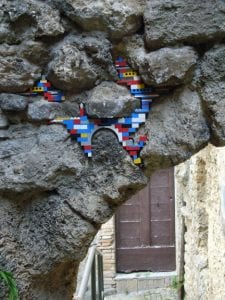 Vormann also works site specifically, primarily in Europe. Three photographs from his 2007 “Dispatchwork” series show the artist “tagging” buildings, somewhat as a graffiti artist would, except that Vormann trades paint for Lego pieces (right), which he inserts into crevices of decrepit stone walls throughout Italy, temporarily fusing the present with the past.

While these works support the exhibition’s thesis in interesting ways, the other two works in the show feel like slaves to it. Hollis Hildebrand-Mills’ “Bread in the Sky” is a video collage whose overlapping imagery feels adolescent, even with the weighty religious soundtrack. And Stan Woodard’s untitled sound and light installation similarly lacks the gravitas of the other works. The ambient soundtrack and reflected light bouncing off disco balls do create a sense of dislocation and shifting space, but the installation teeters perilously close to kitsch without jumping fully in, if in fact that was the point.

If the ideas behind “Small Pieces, Loosely Joined” are correct, this new method of processing information could be leading us to a way of creating and eventually thinking about art that is inherently derived from multiple perspectives and not reliant on a chronological ordering of ideas. While I remain skeptical that humans can avoid the need to categorize and pigeonhole (which is usually an effort to more easily understand their world), the thought of a place that is more open and accepting is certainly intriguing.