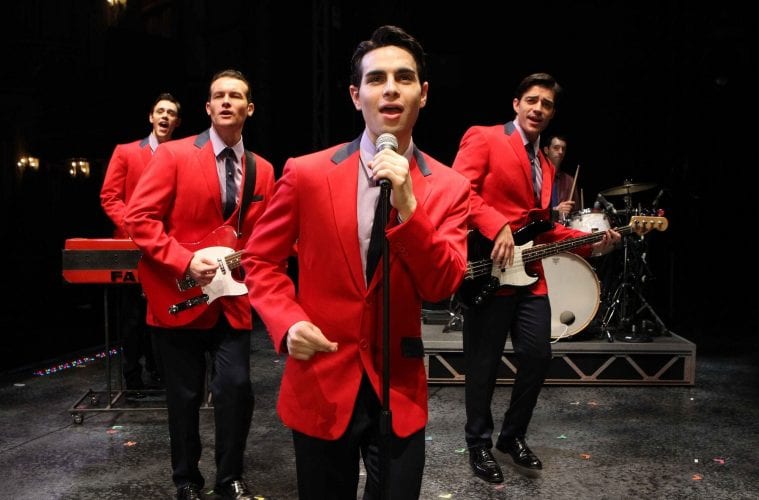 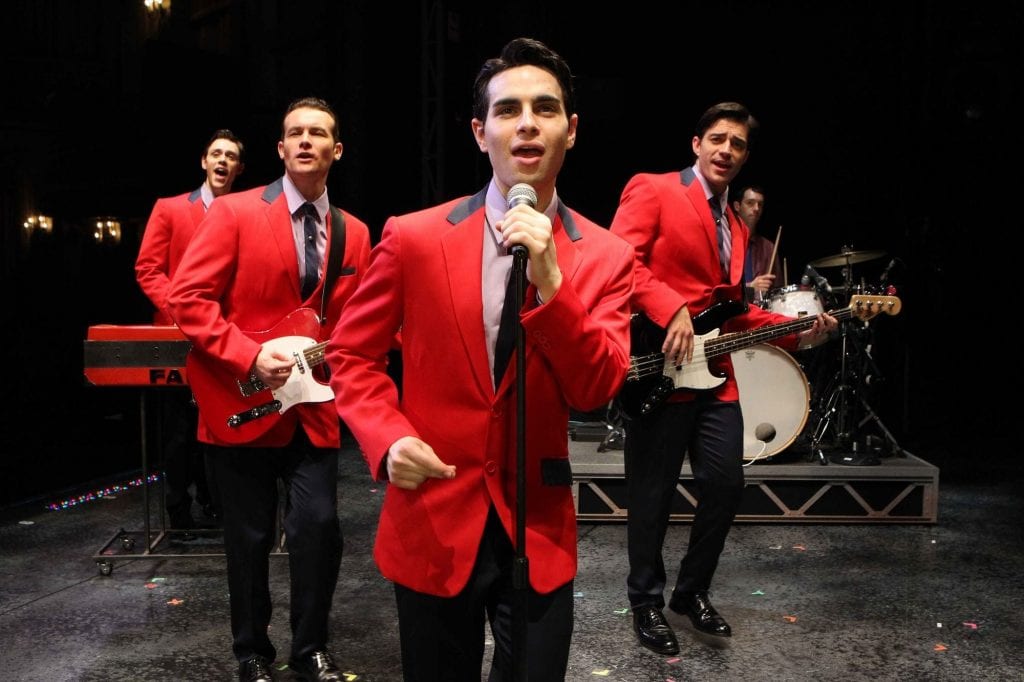 Jason Kappus (from left), Colby Foytik, Brad Weinstock and Brandon Andrus play early-‘60s pop group the Four Seasons — warts and all — in the crowd-pleasing Broadway touring production of “Jersey Boys” at the Fox Theatre through June 10.

“Jersey Boys” is back at the Fox Theatre for another extended run, this one for three weeks, through June 10. There’s no ironclad rule that a three-week run for a Broadway national touring show in Atlanta, as opposed to the standard six-day run, is a guarantee of a stellar show, but it’s a good sign that it’s going to be a crowd pleaser. “Jersey Boys” is both.

in 2005, when it debuted on Broadway, but before it won four Tony Awards including Best Musical, skeptics could be forgiven for thinking that this story of Frankie Valli and the Four Seasons was just another jukebox musical. Even for pop music buffs, they are a quaint footnote to the 1960s, a quartet fronted by the piercing falsetto wail of Valli with a string of catchy hits (“Sherry,” “Big Girls Don’t Cry,” “Walk Like a Man”) that are cute or kitsch, depending on your taste, but certainly not on par with the transcendent music of the era (the Beatles, Bob Dylan etc.).

But the four original band members allowed Marshall Brickman (who co-wrote some of Woody Allen’s best films, including “Annie Hall” and “Manhattan”) and Rick Elice (a Disney consultant and former ad man) to mine their life stories and spin an uncommonly truthful warts-and-all yarn about their flaws, which are legion, and the demands of what Joni Mitchell called “the star-making machinery.” There are youthful crimes, gambling debts, mob connections, groupies, drugs, self-destructiveness and even jokes about Valli’s 5-feet-5 stature. (When he tells a fan that he’s going to be bigger than Frank Sinatra, she replies, “If you stand on a chair.”) Warning: there’s also a carpet-bombing of F-bombs, in case you’re taking your children (or parents).

The four singers take turns narrating their version of events. Tommy DeVito (Colby Foytik), the group’s founder, is basically a low-level career criminal who wants to start a band and recruits the others. Valli (Brad Weinstock) is a naïve (at first) teenager with an unconventional voice that turns angelic when he unleashes that testicle-retracting falsetto. Bob Gaudio (Jason Kappus) is the songwriter who ends up penning most of the group’s hits. And Nick Massi (Brandon Andrus) is the bass-singing misfit, always griping that he’s going to leave and start his own group, unaware that he’s basically Ringo.

Even before we hear the first song (about 45 minutes in), “Jersey Boys” is sure-handed, whipping through a rapid succession of scene changes depicting early struggles and missteps. This is the part we ought not to care much about, but Brickman and Elice have made it funny, engrossing and very fast-paced. The blackout-scene style fits the actors’ abilities: they’re not bad, but they seem to have been cast more for their singing ability, which is first rate, and without those voices, “Jersey Boys” would sink in cement shoes.

Then Gaudio co-writes “Sherry” with producer Bob Crewe and the group reels off that song, followed quickly by “Big Girls Don’t Cry” and “Walk Like a Man,” which is pretty much how it happened in 1962. “Jersey Boys” then becomes one of those audience-hugging nostalgia trips, like “Mamma Mia.” Again, the crisp staging is key, right down to the hilarious white-guy hand-chopping choreography of the era.

Although most of the Four Seasons’ songs are fun, disposable pop, “Jersey Boys” acknowledges the role of class disparity that ran through a lot of Crewe’s lyrics. The lovers in the songs are often unable to be together because one is rich and the other poor; this gives the songs a feeling of unfulfilled longing that Valli milks for all it’s worth.

The group fragments in Act 2, as DeVito’s gambling debts catch up with him and the band throws him out. Then Massi quits because he’s just not into it anymore. Gaudio, who never cared for touring, retires from the road. The leaves Valli to put together a backup group using the Four Seasons name, as is the case with so many litigation-riddled oldies groups. A full-page ad in the program mentions that Valli and the Four Seasons will play the Fox on November 1, but Valli will be the only original Jersey Boy on stage that night.

Any “Jersey Boys” lives or dies by the actor who plays Valli, and Weinstock is in a tradition of guys you just can’t take your eyes off of. It’s a very specific role, for a short actor who looks dark and Italian and who can sing exactly like Frankie Valli — which is ironic when the whole point of Valli’s career was that he sang like no one else. Weinstock is a little too nasal in the lower registers to be the ultimate Valli impersonator, but he nails those eye notes like a master carpenter over and over, so perfectly that you could probably forgive his being 6-feet-6 and Norwegian. (The role is so demanding that Weinstock won’t peform it at every show in Atlanta; Hayden Milanus will sing it at Thursday matinees, Saturday matinees and the Sunday matinee June 3.) Andrus, Kappus and Foytik don’t face nearly the same pressure, and they all are so good that you feel as if you’re watching the originals.