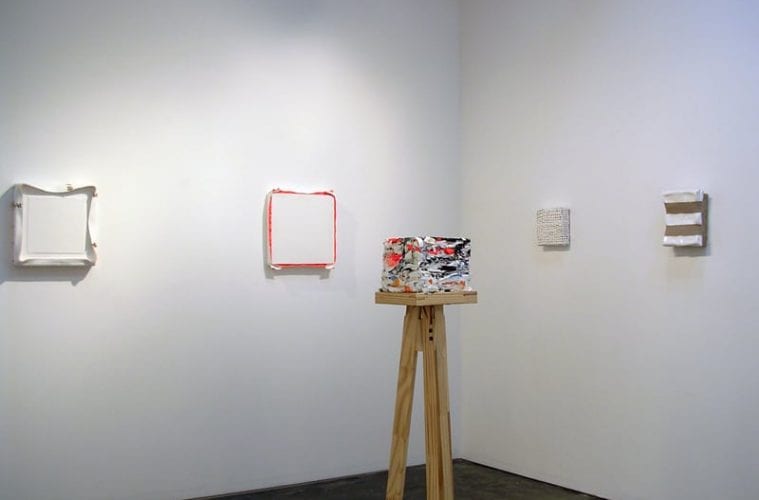 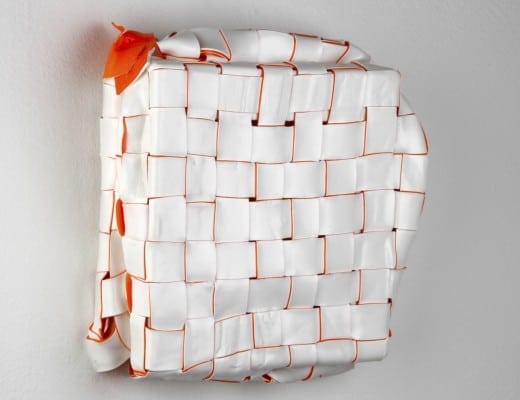 If, as an Atlanta artist once wrote, “painting is everything that happens on the support,” what does it mean when the painting is self-supporting?

Jeff Conefry’s aptly named “Paint,” at Marcia Wood Gallery through December 13, dispenses with the application of paint to the supporting panel and simply assembles the dried paint layers into a convincing painting that operates more like a sculpture.

Or is it that the wall sculpture operates more like a painting?

Since paintings have been going sculptural for a very long time (Frank Stella, Elizabeth Murray, etc.), I vote for painting. And Conefry’s works are very fine paintings indeed, made up of different levels of what in a more integral medium would be called impasto.

Here, of course, the layers are autonomous, not built one on top of the other, and their loose attachment at the base makes for a level of ambiguity that is nothing short of delicious in its insistence on the sheer sensuous nature of paint (and occasionally of detached canvas).

Granted, some of the paintings mimic sculpture so successfully that one might as well give up and admit we are dealing with a medium in between the two historical categories. A prime example would be Support, the cube of interwoven paint resting on a custom-fitted table (one can scarcely call this “support” a pedestal, though it might be considered a twisted descendant of a traditional painting’s support, because it is made from painting stretchers).

Woven 1, 2, and 3, paintings composed of strips interleaved in the classic form of weaving used for baskets, would be another, although their placement on the wall renders their categorization a bit more challenging. 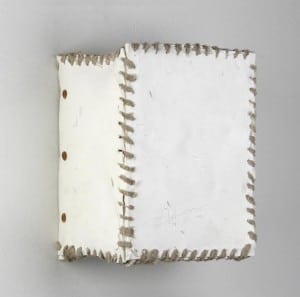 The punning Paint Box is composed of cast acrylic paint stitched into a box shape with strips of linen. Even though it hangs on the wall, it is, indisputably, a box made of paint, fulfilling the dream of trompe l’oeil by replacing the illusion of a represented object with the object itself, conjured up by the act of assembling paint in the right way.

References abound, sometimes seemingly serious, sometimes as antic as a latter-day descendant of Monty Python. One Stripe 2, for example, imitates Mark Rothko (even though the title suggests Barnett Newman). All of them exist in a playful but aesthetically serious interzone that is neither one thing nor the other in terms of 20th-century art historical models.

This work is as contemporary as it gets when it comes to asserting that painting is alive and well in a new format. In fact, it may even share in William Faulkner’s famous assertion that not only is the past not dead, it isn’t even past. There is a great deal of historical continuity here in an utterly unexpected mode that is a simultaneous combination of history and the disruption of history.

What historical continuity there is, however, crosses so many borders that it’s hard to claim any single line of descent. There is a certain amount of Lucio Fontana’s slit canvases in the ruptured pillow form of Wrapped, a title that, of course, evokes Christo, but the overall combination doesn’t unambiguously refer to either artist.

Black Square 2 looks like a send-up of Malevich hybridized with a few examples of the work of the boys who followed Beuys. What lies beneath Conefry’s color-reversed Black Square undercuts Malevich’s confident declaration that the Black Square was clearing up all the ruins of history, allowing art to start afresh — but Conefry suggests a different sort of fresh beginning. 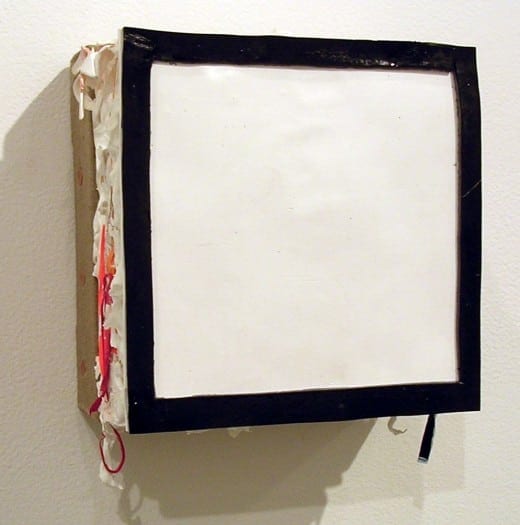 Where Malevich’s various Black Squares and White Squares cited a rigorously Euclidean geometry, Conefry’s forms reflect a post-CAD world in which the curved and wobbly lines of descent echo non-Euclidean representations of space even as they imitate rather directly the warped geometric forms that computer-aided design has rendered feasible in architecture.

Tom Ferguson’s previously quoted observation about the support, published in a mid-1980s issue of Art Papers, was eminently applicable to his own body of work, in which semisculptural layers of paint were on the way to three-dimensional painting without acknowledging it. Now Conefry has affirmed the permanence of the postmodern condition of centerlessness that characterized that decade’s philosophies: it is possible for a well-defined painting to exist without being dependent on a single material support to make it an integral object. 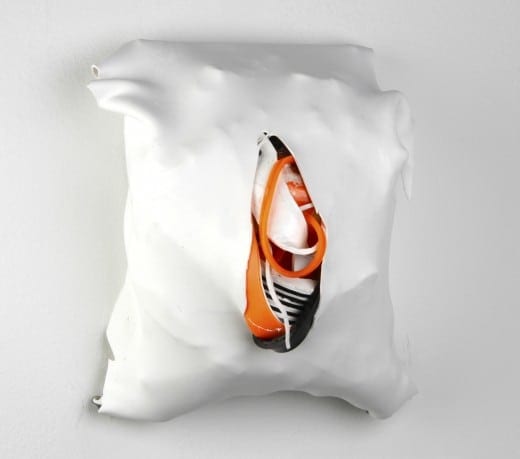 On the other hand, this isn’t quite Zygmunt Bauman’s “liquid modernity,” the term that has long since displaced postmodernity in defining our social condition. There is nothing liquid about these deconstructed chunks of a medium that is as solid as it ever was, though it is cut up and rearranged in ways that deny the fixity of a singular object without insisting that the arrangement could just as well be made some other way.

These arrangements of paint and canvas convey compositional and emotional messages that wouldn’t be conveyed if their components were put together in any way other than the way Conefry has chosen.