This may be the age of wireless connections, but artists seem to finding all sorts of uses for the lowly cable. Just as the image links music, modernism and identity in Jenny C. Jones’ drawings and sculptures, Jason Butcher and Joe Tsambiras mine the cable’s metaphoric possibilities in ways that speak to their own interests in “Restless Devices,” their two-person show at Beep Beep Gallery. 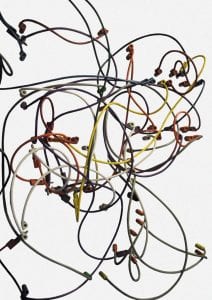 Butcher contributes two interrelated bodies of work, which represent his dystopian view of the global condition. Both make reference to the Buchla electric music box, a synthesizer for the composition and performance of electronic music. One is a series of photos, compositions made with his Buchla’s color-coded patch cables, which loop across the white ground like lines in a drawing. Each comes with headphones playing grating, discordant sounds.

Although they look like random abstractions, each composition reproduces the configuration of cords plugged into the Buchla (which he removed in Photoshop) to compose the “music” coming out of the headphones.  It’s hard to get beyond the disagreeable noise without knowing the back story, so to speak. Just as problematic, the concept is more interesting than the visual result.

Butcher’s animations are much more accessible, and memorable. 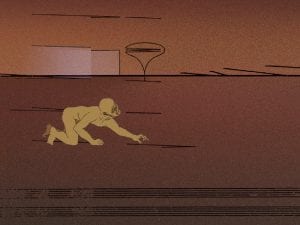 In “Treatise 125-126,” a bald naked figure crawls crabbedly across a barren landscape. When he moves off screen, the animation scrolls backward across the empty landscape to the starting point, where our post-apocalyptic Sisyphus (who uncannily resembles St. Jerome in Leonardo’s unfinished painting) begins his pointless, endless journey again. Here the music makes total sense.

The landscape is an adaptation of an electronic music score, the 193-page “Treatise” written by Cornelius Cardew, a renegade acolyte of Cage and Stockhausen, before he came to see their music as a tool of (his word) imperialists to distract people from their nefarious activities. Politics aside, I like the way that plays into his Cassandra-like animations. 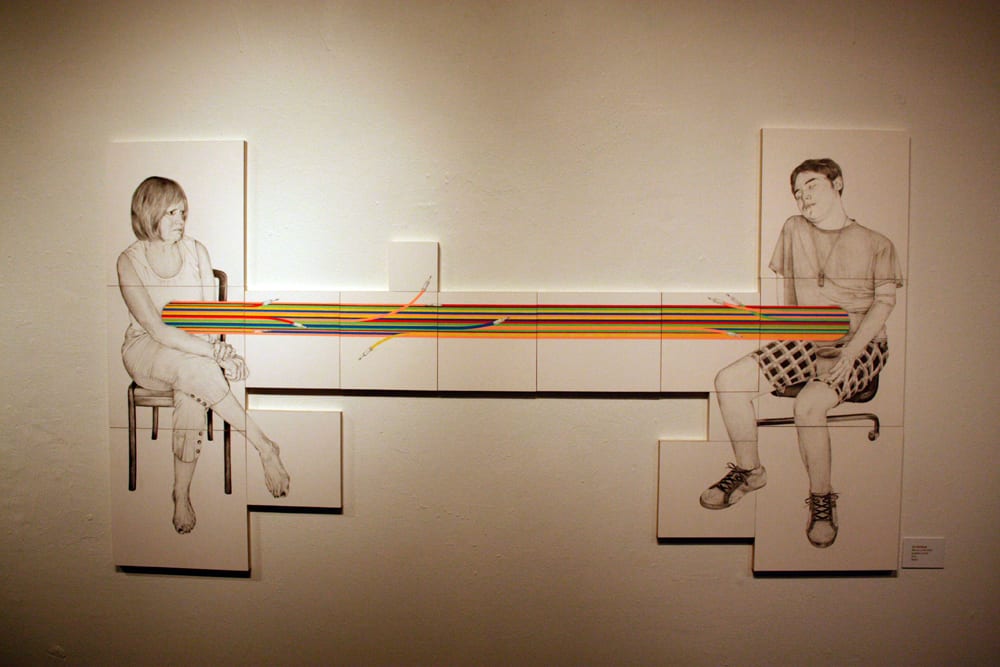 Human connections, the need for and the difficulty thereof, are themes in Joe Tsambiras’ handsome drawings. His metaphoric “device” of choice is the electric cable. In “Murmur of the Heart,” for example, the cables run between a mother and her teenage son. The two figures, limned in pencil, are archetypal: Mom, her face furrowed in that look of maternal concern, gazes at the teen, who lolls on a chair, looking off into space, either ignoring, blithely unaware of or unaffected by her attention. A gaggle of multicolored cables, the ties that bind, stretch across the three-foot gap between the figures; some penetrate both parties, some dangle halfway across the gap. It’s a nice metaphor for the ties that bind, or unravel. 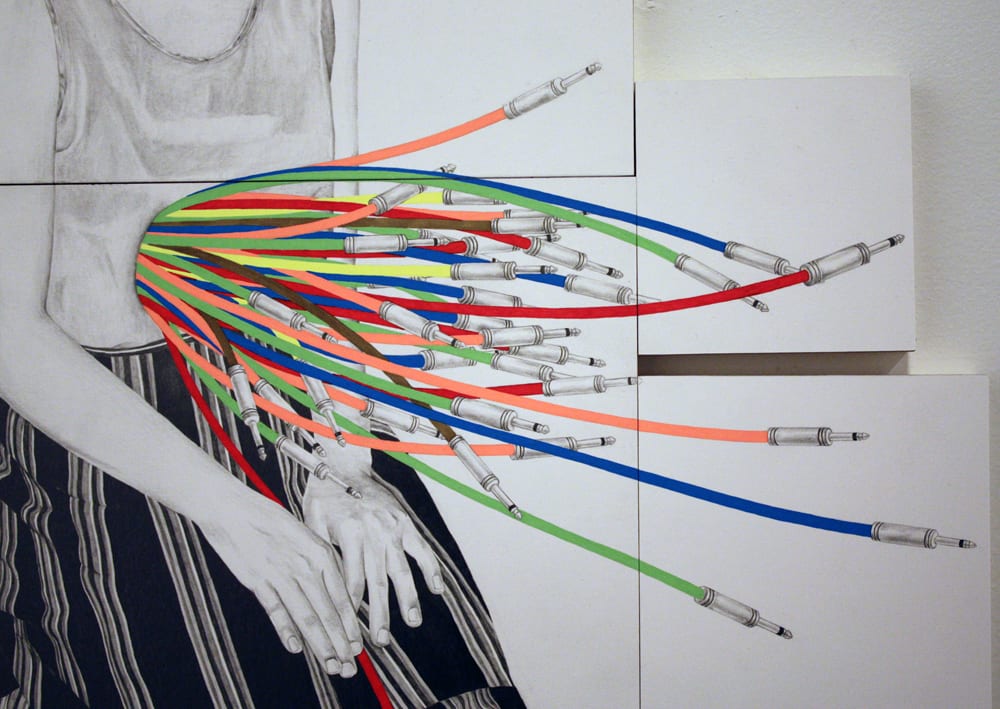 Tsambiras employs the formal strategies of “Murmur” in many of the other works. He plays delicate graphite figure drawings off of bright-colored tubes or dots, which he layers deftly to create a rich surface and sense of depth. He also manipulates multiple panels to alter the predictable rectangle. (Detail of “megan,” at left.) I’m not sure if there’s a conceptual principle behind these aesthetic choices, but the visual result is pleasing.