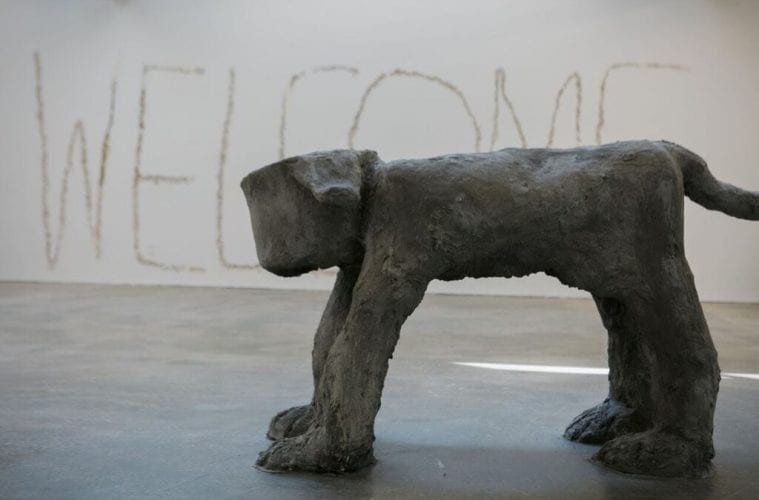 Review: “It Can Howl” and Southern Identity vs. Southern Perception

A bindle isn’t something often seen in modern America. Today, the bindle is an evocation of a Depression-era United States, a sign of such crippling economic collapse that the whole of one’s possessions could be parceled in such a way.

But it’s a bindle that greets us at It Can Howl. Hayley Silverman, an interdisciplinary artist from New York, has constructed “Spare Ribs I” out of silicone, a color-changing LED light, a wooden stick and steel base. This symbol of an impoverished America can now illuminate a home. If “Spare Ribs I” evokes the South, it is the South of Faulkner, Porter and Williams. It is the South that is nearly a century behind us that we can’t seem to shake. It is not an invalid depiction, but it is outdated and limited in perspective.

It Can Howl is a group show on display at the Atlanta Contemporary through August 7. Its intention is to “take a deeper look at the numerous experiences of the American South.” It is comprised of works made by a diverse array of eight contemporary female artists who hail from everywhere from Los Angeles to Paris to New York to England. Only one from the ranks grew up within the region: Bessie Harvey, a folk artist represented by the Souls Grown Deep Foundation. Harvey passed away in 1994.

Bringing new perspectives and voices, such as Silverman’s, into Atlanta’s art conversation is important. Our community continually expresses a want to engage in the national and global art conversation. Atlanta has long since proclaimed itself to be the Capital of the New South. If we want to play in the big leagues, as that moniker would imply, it’s important to prioritize bringing visiting artists in from elsewhere. This is a pursuit that has been a point of focus for curator Daniel Fuller in his work at the Contemporary since he began in December 2014.

The thing is, when we do engage in those larger conversations, we need to make sure that our perspective is heard and seen as legitimate. How are we supposed to accomplish this when we’re barely given a seat at our own table in our own backyard, and the conversation is focused on . . . us?

Though the curator’s statement includes the quote cited above, Fuller asserts that the work in the show is not specifically about the American South. “Like many of us who live here, who have chosen to relocate here, the work did not necessarily know it would wind up here when it was being created,” he says. This is problematic. By denying Southern artists the opportunity to engage in a larger conversation about the American South we are stripped of our breadth. Elsewhere in the show, Silverman gets closer to the mark. “Watering Hole,” “Restraint,” and “Reverence,” are vignetted scenes within shallow ceramic and enamel bowls. In the latter of the three, a priest reads last rites to a broken down, aging waiter with a red gingham apron. He is broken in two, drowning in a murky bath of mushrooms, sliced carrots and ramen noodles. Next to him, a Kentucky Bourbon trolley sinks. Only the poppy pods in this scene flourish.

There is a story within each of Silverman’s servings,  but they are stories reflective of any given part of the country. This triptych serves as a manifestation of the “melting pot” we claim to be as a nation; a conglomeration of histories and ingredients that never quite congeal.

Not 10 feet away, Nancy Lupo’s 32-gallon Rubbermaid Brute containers appear to be on the march. The trash cans are scarlet red, boasting Wisconsin Badgers, embedded with cherries in various states of decay, toilet paper, chocolate soccer balls, Babybel cheese (a brand which originates in France) and quail eggs.  What story of the American South is told here? (And why the Wisconsin Badger in lieu of a Bulldog, Gator or Tiger?)

Lupo’s containers form a half-circle around Bessie Harvey’s largest work in the show, “Jezebel,” which depicts four racially diverse female characters perched upon a painted tree trunk. Here we see an authentic depiction of the female Southern experience. Three of the four women figures are women of color outfitted with pageantry — pearls around their necks and gold fans in hand. The fourth is the least glamorous of them, an uncomely, stout white woman with unkempt hair. She holds a picnic basket and wears a weathered apron and modest floral dress. Those with the richest histories are not always what the canon would have us presume, and this piece, as well as Harvey’s other pieces scattered throughout the exhibit, reinforce this theme. These two works and its compatriots, which are central in the main gallery, are guarded by Chloe Seibert’s giant cement bloodhound, which was created on-site within the gallery space with the intention of being large enough not to fit through any of the Contemporary’s doors (Seibert’s signature hat trick). The dog looms over the gallery,  standing on guard with its bucket head in front of Seibert’s other piece, “WELCOME.” The word has been hammered directly into the gallery’s drywall. Customarily a dog and a beckoning warm word would be considered two of the signatures of the “Southern Hospitality” experience, but as dominating as the two pieces are, they succeed only in thoroughly haunting the show.

The audible experience of It Can Howl cannot be overlooked as it is certainly one to be overheard. Jeanine Oleson’s “Building an empire and other things of no consequence . . .  (detail of ziggurat)” might be hidden behind Lupo’s trash cans, but the sound of gunshots and shouting voices that emanate from it can be heard clearly throughout the gallery. Across the gallery, Martine Syms’ “Lessons I-XXX, 2014- ongoing” showcases African-American women articulating their experiences to various daytime television audiences, with R&B hits by artists like Brandy interspersed throughout. Still further, Danielle Dean’s “Baby Girl” echoes. Individually, these contributions would serve as telling accounts of the female African-American experience. But this confluence of sounds in such proximity to one another makes for a dizzying and distracting effect. Thusly, they drown one another out.

It Can Howl is a collection of stories, that is for certain. But it is not a story from the South, nor is it a story uniquely concerning the South. Telling the story of a place or articulating the experience of a region, especially one with such a controversial, varied and tumultuous history as our own, is no simple undertaking. But it is an effort that would directly benefit from letting the leaders of the conversation consist of those most familiar with the red clay terrain we call home.