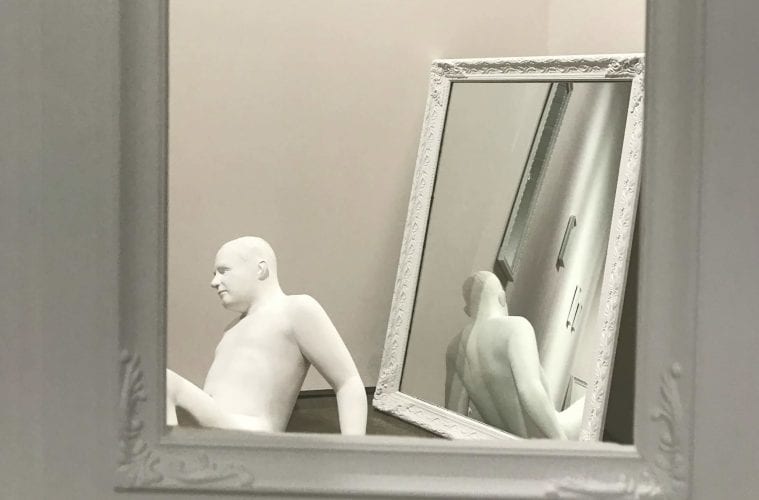 As the show’s title suggests, a certain quality of aloofness unites the figures in Easy Air, a new group exhibition on view at Hathaway Gallery through May 12, featuring work by Ridley Howard, Scott Ingram and Christina West. In West’s sculptural works and in Howard’s works on paper, methods of construction and demarcation intensify the figures’ sense of detachment, which is often both spatial and psychological. In Ingram’s work, which includes a large-scale architectural installation, photographs, prints and paintings, construction materials themselves are used as tools for humorous investigations of modernist art and architecture. The exhibition could be superficially viewed as a stylish exploration of relationships between architecture and the figure, but careful examination reveals Easy Air as an emotionally charged show delving into the metaphorical and psychological potential of mirrors, windows and walls to convey experiences of interiority, awkwardness, isolation and intimacy. Howard divides and organizes the figures and vistas in his drawings with the abstract geometric borders, familiar from his paintings, which often reduce their figures’ surroundings to panes of coordinated color. The drawings included in Easy Air contain even less contextual landscape: their graphic borders are the only beneficiaries of Howard’s striking color pairings, and the lovers and loners he’s fond of depicting are left less visible than usual in graphite.

More striking than in his paintings, however, are the influences of graphic design and filmmaking on Howard’s work. In a 2016 conversation with contemporary art blog Hyperallergic, Howard mentioned his interest in book design and film packaging from the 1960s and ’70s. “I like that film posters can capture the essence of the film in an arrangement of graphic elements and image,” he said. In a looser sense, the same can be said for the way in which his works convey parts of a distilled fictional narrative. The coolly gazing young man wearing sunglasses in Howard’s drawing Untitled 9, one of two drawings in the show without any gouache embellishment, calls to mind Timothée Chalamet’s Elio from the recent film Call Me By Your Name.

As much as he draws from modernist and pop graphic design sensibilities, Howard also looks toward foundational combinations of geometry and the human figure in the work of Renaissance painters such as Piero della Francesca and Fra Angelico. A cerebral romanticism suffuses Howard’s work: a tendency toward imagination and self-reflection appears even in drawings depicting a single figure. The coyness with which Howard’s figures indicate their interior and intimate lives is precisely their charm.

The same cannot be said of the sculpted figures arranged in installations by artist Christina West: their postures and gestures communicate isolation and awkwardness, not intimacy. This is due in part to the uncanny proportional differences between human scale and West’s sculptures, which average between three and four feet tall. The grotesque, anatomical quality of the figures, often fully or partially nude, recalls depictions by painter John Currin, with features brought so sharply into focus by mannerist tendencies as to seem overly fleshy and slightly repulsive. Their flaccid penises and sagging bellies are sculpted with an exactitude that feels darkly satirical yet somehow empathetic.

Installations involving architectural and interior design elements including walls, mirrors and windows further complicate West’s figurative sculptures, which previously appeared alongside work by Howard in ATLBNL, the 2016 Atlanta Biennial at Atlanta Contemporary. In that exhibition, a nude male figure stood on a strip of carpet that rose parabolically in front of him to form a small scaffolded wall into which his face seemingly disappeared, leaving only the back of his head and body visible. That visual gag is repeated with a figure in Easy Air, the face disappearing into a dividing wall in the large central gallery. In this exhibition, however, a second inverted figure gives the impression of peering through and beyond viewers, akin to the suggestion that his twin is looking through and beyond the dividing wall.

Hanging window blinds mounted on the opposite side of this wall separate two female figures. Instead of looking, however, the figures appear to be listening, with each leaning an ear toward the other despite the blinds between them. Behind both figures and the blinds, a mirror hanging on the dividing wall provides perspectives on this installation and those surrounding it.

West’s most ambitious installation in Easy Air includes a partially constructed wall dotted with framed windows and mirrors at varying heights. Behind this wall, a nude male figure reclines with one knee raised, as if captured while rising from the floor. Like another partially nude figure with his face covered by the T-shirt he’s raising over his shoulders, this reclining figure implicates the viewer in a voyeuristic role complicated by the figures’ mysterious sense of psychological distance and removal. Primarily composed of construction materials such as concrete, gesso and stained wood, Scott Ingram’s work shares many of the formal and material characteristics of West’s wall. In his most impressive contribution to Easy Air, a nearly 50-foot-long installation called Residue, a lacquered wooden beam appears to puncture three suspended wall segments. Aside from the impressiveness of its scale, the installation’s success results from the humorous use of material: the wooden beam is shaped as if it were a steel I-beam. Ingram showcases the same wry humor elsewhere in the exhibition in a photo of an Atlanta construction site displayed in a concrete frame.

Four paintings by Ingram of latex, gesso and web tape on canvas show other experiments with material and medium, but ultimately their primary appeal is the chromatic relationship that develops between their bright geometric compositions and the colored borders in Howard’s drawings. While materially and conceptually intricate, the visual plainness of Ingram’s paintings feels emotionally unsatisfying next to the figurative work by Howard and West. This claim isn’t made from a position of favoring figurative work to abstraction or of failing to notice the rigor and research behind Ingram’s work, but its art-historical cleverness leaves something to be desired in an exhibition so acutely concerned with interior life.

The overall balance of Easy Air makes this and other disappointments easier to bear. Looking at Howard’s drawings, for example, it’s difficult not to wish on some level that they were completed paintings, until you see these faint graphite figures alongside West’s sculptures, made from aqua resin and painted white. To truly examine the facial expression of any of these figures requires a viewer to lean forward, to get uncomfortably close. The viewer is often the most dynamic figure in Easy Air, crouching or bending to get a closer view or different perspective. Aloofness can be alluring, and these figures tempt another look.