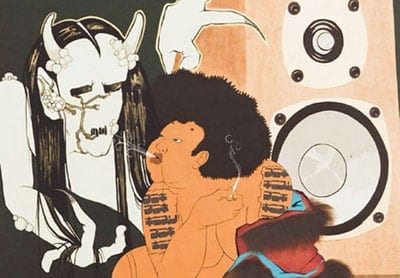 Review: Iona Rozeal Brown’s “mythological mash-ups,” and a bit on Kehinde Wiley, too

Iona Rozeal Brown’s paintings stand at the intersection of art history and identity.

The artist, whose solo exhibition at Saltworks closes November 6, made her name with bold, vibrant paintings about global hip-hop, specifically its embrace by Japanese youth. It was manifested in the aping of hip-hop fashion — clothing, hair and even darkened skin. Called ganguro, translated literally as “blackface,” the phenomenon both fascinated and disturbed her.

“I felt stung,” Brown told an interviewer. “They were imitating me — a black person — in a way that was neither flattering nor historically sensitive…. To the ganguro, it’s all just drag.”

Her big idea was to explore the phenomenon using the formal language and content of Japan’s ukiyo-e woodblock prints of the 17th and 18th centuries. These poster-like images depicted the hedonistic world of teahouses, theaters, brothels and their denizens — geishas, kabuki actors and so on — using flattened forms, broad planes of color and decorative patterns.The prevalence of masking in ukiyo-e — geisha face paint, theatrical masks — spoke to Brown’s distaste for the superficiality of ganguro. (It’s also an ironic inversion of Paul Lawrence Dunbar’s poem “We Wear the Mask.”) In addition, she used ukiyo-e to address the decadent side of hip-hop. The elaborate kimonos, for example, might be symbols of bling; the samurai might suggest the glorification of violence.

Brown takes this theme further in her recent work “all falls down,” a warning on the dangers that hip-hop culture poses for young women. For this body of work, Brown created a vaguely sci-fi version (and a loving satire) of the archetypal journey narrative (from “The Odyssey” to “The Monkey King”), replete with gods villainous and beneficent and a warrior hero. In a nod to the artist’s hip-hop roots, Yoshi, the heroine, is a dude in sunglasses, outsize Afro and Superwoman cape, which is a quilt bearing hip-hop slang. She rides a Big Wheel to the rescue.

Brown takes her art to language in a different direction as well. Saltworks’ “mythologies and mash-ups” — a selection from this series, which debuted at the Museum of Contemporary Art Cleveland — reveals her moving away from the ukiyo-e stylization toward a looser paint handling, more comic-booky figuration and even more decorative flourishes, including graffiti lettering and ever-present bubble-like forms.

Although the works stand alone as paintings, they require textual explanations for a full understanding. Perhaps some attention should be paid to the presentation of text in a gallery context.

Brown’s oeuvre brings up all associations. Chinese artist Chi Peng, for instance, reworked the “Monkey King” myth to comment on contemporary China. Closer to Brown, Kehinde Wiley, a fellow Yale grad, uses art history to explore the politics of race and identity. His antededant is the European Old Master genre of grand and aggrandizing portraits. By replacing the kings and warriors depicted in them with young contemporary black men, he exposes both the language of power inherent in the paintings and the stereotypes that imprison his contemporary subjects.

Brown has made a feminist, or at least a female, version of the journey myth. Except for the siren, the characters, even when semi-nude and voluminously proportioned, do not exude sexuality. Wiley’s world is male, but it swings between the macho of the portraits and the homoerotic character of recent works, in which the supine men in versions of the dead Christ look more like Manet’s “Olympia.”

It’s also interesting to note that Atlantan Fahamu Pecou used the same trope to explore identity, stereotypes and the power of media images when he inserted his macho alter ego into renderings of magazine covers.