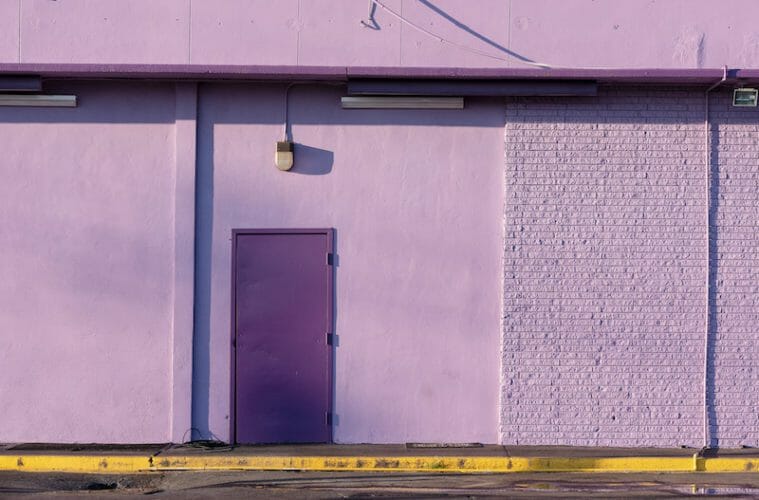 Jerry Siegel's "Violet" is one of his striking monochromatic photographs at Spalding Nix Fine Art.

“Is painting dead?” was the art question of the last century. For the past 150 years, since the invention of photography, the question has been about what painting still has to offer. It is perhaps ironic to discuss photography in terms of painting, but ELEMENTAL at Spalding Nix Fine Art (on view until November 12) calls for such an approach. The five Atlanta photographers in the exhibition understand and appreciate their art historical ancestors; their work is indebted to painting. What is striking in ELEMENTAL is the way each of these photographers addresses formalist concerns such as color, composition and light in their photographs, though each one’s process and content are completely different from the others’.

Jerry Siegel exhibits a suite of six photos of urban architecture. Each photograph of a wall of a building is in a different color of a saturated palette of yellow, green, orange, red, violet or blue; together, they constitute a rainbow of images. “Green (Leaf Wall),” the most physically tactile of the series, is of a stucco wall painted a jarring Kelly Green. 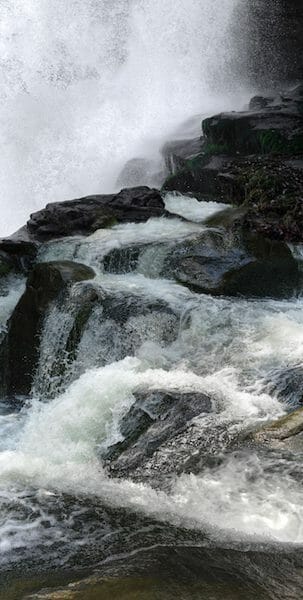 Lilly celebrates the beauty of nature in photographs such as “Broken Falls.”

Although green is a most unforgiving color, “Green” is a richly satisfying photo with only two components: a building’s exterior wall with leaves densely plastered on the surface and a small boarded window in the upper right-hand corner that provides the only break in this intense patterning and texture. The photo’s monochromatic composition is parallel to great colorists like the painter Ellsworth Kelly, who used a similar green in his paintings for decades, including a monochrome titled “Green,” 1951. (Two of Kelly’s paintings using this green are almost always on view at the High Museum of Art here in Atlanta.)

Siegel’s capturing and drawing attention to texture in this photo also links his work to that of noted abstract painter Robert Ryman. Two photos by Siegel that explore a muted palette are “Window with Sheet” and “Thoughts of Sara Jane.”

These also are architectural portraits, but instead of being monochromatic abstractions, they call up the quietude of Edward Hopper’s painting “Early Sunday Morning,” 1930. However, these photos contain the modulation of tones and variations of a creamy tan. Siegel’s muted palette and his use of rectangular compositions have a relationship to both the still-lifes and landscapes of Giorgio Morandi, the great Italian 20th century painter whose still-life paintings have the presence of a city. [Full disclosure: Siegel is married to ArtsATL executive director Patti Siegel.]

Beth Lilly’s photos also have the presence of paintings in both their scale and proportions. “Broken Falls” and “Unbroken Falls” are vertical compositions, 48 x 24 inches. Lilly photographs places in nature, then uses Photoshop to manipulate the compositions by layering and stretching.

“Unbroken Falls” is the more abstract of the pair; the water becomes small white vertical strokes against a dark background. These splashes are a photographic equivalent of the work of the painter Pat Steir, who has flung, poured and dripped paint on her canvases.

Lilly’s group of four elements, “Mind Like Sky 036” (air), “Bubbly 2495”(water), “Canopy Suite 400-126” (earth) and “Fire 2523”(fire) are all square works, 32 x 32 inches without glass, that she builds from multiple images of each element, yet the result is stunningly seamless. In these new recreated photos of natural elements, one can see nature afresh. 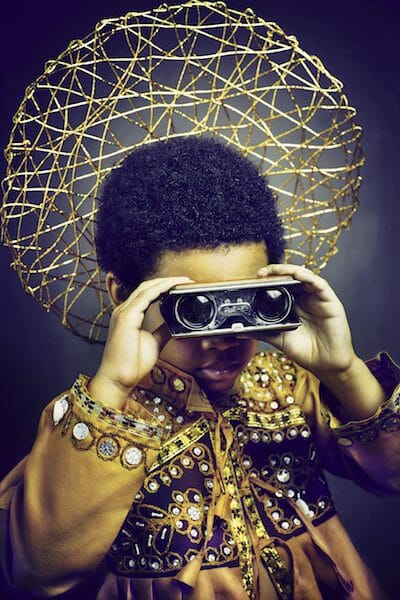 The walls in one room of the gallery are always covered in maroon velvet, which could not be more fitting for Myrtie Cope’s black and white photographs of historic theaters. These include Atlanta’s Fox Theatre, whose architecture dates from 1926 and whose ornate and faux interiors recreate the architecture of Moorish and Egyptian palaces.

Cope’s photos are part of her series Second Act. These old theaters, which had fallen into disrepair, now have been restored to their former grandeur. The images look more like etchings than photos, perhaps because of the architecture of these decorative historic spaces, which contain theatrical lighting and ornamentation, but no people. They celebrate another world and time.

Tokie Rome-Taylor‘s photographic prints of children adorned and dressed in patterned and elegant frocks have the feeling of collages. The burnt sienna palette of warm browns and golds in the patterns on the fabrics, the jewels and feathers adorning the children’s garments make these photos seem like dream vignettes.

Two of her photos, “Scout” and “The Sight,” call attention to the idea of seeing and perception. “Scout” features a small boy searching and looking intensely through opera glasses; he is dressed in a bejeweled prince-like robe with a gold wire halo radiating behind him.

In “The Sight,” a young girl looks out at the viewer. She wears a necklace of pearl buttons, her eyes physically embroidered in gold thread. These two photographs are standouts. By focusing on acts of perception, Rome-Taylor has gone beyond her illusory portraits and brings these dream-like images closer to the viewer.

Peter Essick’s color photos of trees taken at night display a chiaroscuro of light and shade that encompasses the artificial color created by streetlights, traffic and other external illumination. Essick juxtaposes the trees’ natural form in their urban setting with the artificiality of their being lit by streetlights and cars that illuminate the natural forms of branches and tree trunks. The trees are the main characters of these photos. The series is titled Sleeping Trees but the trees, presented in dramatic light and color, seem to be anything but asleep.

Deanna Sirlin is an artist and writer. She is known internationally for large-scale installations that have covered the sides of buildings from Atlanta to Venice, Italy. Her book, She’s Got What It Takes: American Women Artists in Dialogue, (2013) is a critical yet intimate look at the lives and work of nine noted American women artists who have been personally important to Sirlin, based on conversations with each one.