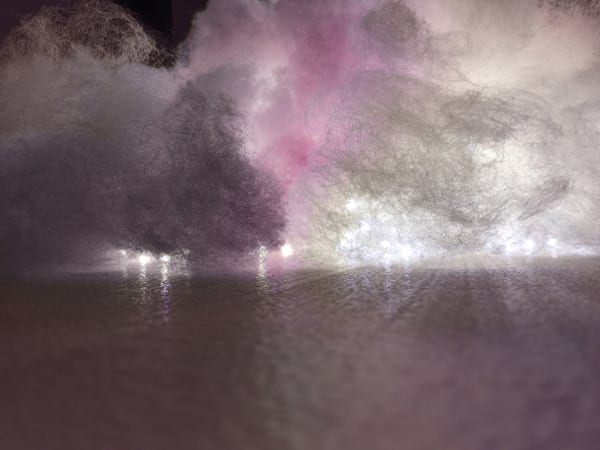 Review: “Infinite Body” shows the breadth and depth of beauty

Bojana Ginn’s Infinite Body, at Whitespace through May 13, ought to be experienced as an extraordinarily beautiful exhibition first and foremost. The reasoning behind the beauty takes us into intellectual territory that requires a bit of a journey to fathom.

The front gallery contains a two-walled video projection that begins with vertical lines at different angles and proceeds through a succession of geometric transformations, ending with cascading particles of light. Constructed in Adobe’s Illustrator, it contains the signature of its making in the beginning — blocks of text listing the parameters within which Ginn transforms the lines she is drawing within the program.

The third wall contains photographs of cloudily abstract, shadowy forms, images created by physically manipulating the body of a camera during long-exposure photography of some of Ginn’s previous installations.

After this immersive yet minimal beginning, the back gallery comes as a delightfully rich sensory overload, as the room is dominated by an inwardly illuminated rectangular soft sculpture spilling from wall to floor, made from a fluffy, cloud-like substance that turns out to be sheep’s wool (or “sheep hair,” as the description of media has it). Geometric wall arrangements of neon tubes in what Ginn terms “neon drawings” repeat the cloud’s palette of white with pink secondary tones. Photographs document previous versions of what Ginn terms a “phygital cloud” — the coinage a mash-up of “physical” and “digital.” It is all quite stunning, and more than a bit endearing, in its nontraditional manipulation of traditional media — Ginn writes in her artist’s statement (originally written for her artwork in the 2016 Venice Architecture Biennale) that she is “interested in re-defining our relationship to ancient materials.” Almost dematerializing an organic fiber traditionally used for tightly woven fabrics is one way of doing that.

Ginn states that the entire exhibition deals with the possibilities that follow from the beginning with the line as the fundamental element of artistic construction. As she has described it, the lines she transforms in her video represent the intervention of the human hand in a computer program created by other human hands. The neon geometries represent a different wedding of human gestures with human-made technical media, and also represent, she has said in conversation, the same lines that would result if the organic tangles of hair in her DNA-laden cloud were straightened into the patterns implicit within it.

Ginn is a poet of the sciences and so articulate about the conceptual ground on which her visual metaphors rest (or from which they spring) that it’s unfortunate that her playful titles are more than a bit opaque. The video is Supermassive Superstrings (Melt on Tongue). The floor sculpture is Praising Softness/Pink Gluons on the Small of the Back/Fuzzballs and Black Holes. Even before we discover that the neon drawings are titled Pink Thoughts, Blue Stars, White Flowers 1 and 2, it is obvious that we have dropped into an implied assertion about the relationship of biology and cosmology that nothing in the comments about the line has led us to expect.

Ginn is more than capable of explaining the philosophy of the structural unity of the universe’s underpinnings that makes these slightly jokey and supremely poetic titles more than poetry. But there is nothing on the premises to explain them, or her choice of the exhibition title (and title of one of the photographs) Infinite Body, and it would have been good if there had been.

The repeated title Dream Tectonics attached to three of the photographs may serve as evidence that this exhibition is about the potentially infinite number of interactions that flow from the preexistence of geometric possibility combined with what the preconscious and conscious human mind does with it. The possibilities formulated in the imagination give rise to art and technology alike. Before that outcome, the vague intuitions preceding imaginative interpretation arise from a substrate that consists initially of the human body but eventually could be understood to include the entire universe, quite literally. The phenomena described by mathematics, physics and biology coincide in the work of art and in the body of the artist.

Why all this should be so, in empirically verifiable ways that bear little resemblance to the metaphysical proposition that “all things are one,” requires a considerable amount of explanation. Ginn has spoken about her own version of these ideas in such venues as an international mathematical conference and a 2015 Summit on Ethics in Bioengineering, but I cannot pretend to be able to paraphrase her particular iteration. The summary in the preceding paragraph may bear little resemblance to how Ginn herself analyzes these theory-laden issues.

How much of the underlying thought needs to be presented in an exhibition in which the art can and should be appreciated for its own sake?

The artworks stand up quite well for the viewer without any comprehension of the network of ideas that underlie their creation. In fact, they function more as emotionally involving, evocative objects than as illustrations of any theory whatsoever. Yet Ginn would not have made them this way had she not begun with an intuitive meditation on the artistic implications of the facts of the several scientific disciplines.

I cannot decide how a critic should evaluate the relationship between her cognitive insights and the artwork through which she turns them into physically lovely visual metaphors. The metaphors with which Ginn is conjuring are potent, but the art made from them is evocative rather than elucidative. The associations are profound but so private that without the explanatory intervention of the artist they remain tantalizing mysteries that give delight whether they are comprehensible or not.

The statement Ginn wrote for the installation in Venice gives a few condensed clues, but viewers who missed her artist talk on April 22 may have to remain in a state of pleased incertitude until the next time it becomes possible to track the artist down for direct questioning.