A simmering rage fuels Howardena Pindell’s venerable career as a multimedia artist. Her exhibit at Spelman College Museum of Fine Art, on view through December 5, opens with this statement: “I sustain myself through sheer tenacity. The art world doesn’t want artists of color to be full participants. I work because it is my life’s work. I have no other choice.”

When Pindell arrived in New York in 1967 after earning an MFA from Yale University, the art world was a male-dominated system. Drawn to the emerging feminist art movement, the Philadelphia native was one of 20 women artists who founded A.I.R. (Artist in Residence) Gallery, the first artist-run gallery for women, in 1972. But when her efforts to include a platform against racism in the feminist art movement failed to generate interest from the predominately white movement, she left the organization to forge her own path as an artist, feminist, curator, social justice advocate, writer, filmmaker and teacher.

Moving away from the figurative work she did in graduate school, Pindell adopted the grid as a structure for her drawings and paintings. The grid came naturally to the artist, whose father was a mathematician. In a small work from 1974, Untitled #58, a hand-drawn grid is covered with a mash-up of translucent vellum scraps and hole-punched paper dots that randomly obliterate the grid. The paper dots, hand-numbered and too numerous to count, are a canticle to mathematics. Infinite counting, random distribution and ephemeral materials come together to create an enigmatic surface of light and shadow. 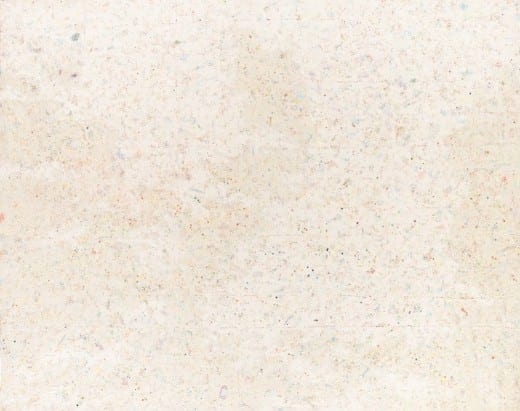 Pindell, now a full professor at The State University of New York at Stony Brook, harnessed her smoldering anger in a painterly process that further submerged the grid. In the large–scale canvas, Carnival at Ostende, a richly embellished monochromatic surface pulls the viewer into an envelope of fragile beauty. In this piece, Pindell claimed the canvas as her own by cutting it into squares then stitching them back together. You might say she wrestled the authoritative grid, perhaps a symbol of patriarchy, to the ground, covering it with thick layers of pale pearlescent paint and encrusting with thousands of colored hole-punched dots.

In 1980 Pindell produced Free, White and 21, a groundbreaking video work that emphatically recounts stories of racism, both experienced and witnessed. She narrates playing two roles at once: a white woman in a blonde wig and sunglasses and herself. After each story, the white woman condescendingly responds with disbelief, accusing the artist of paranoia. The cringeworthy enactment captures the sting of racist attitudes that still prevail. Initially seen as too radical for the times, the 12-minute color video is now in such collections as the Museum of Modern Art and the Studio Museum of Harlem.

In the same year, Pindell was in a near-fatal car accident that left her with a long rehabilitation and memory loss. After this pivotal experience, the artist focused on recapturing the past through photographs from trips she made to Asia, Europe and Africa during her curatorial tenure in the Department of Circulating Exhibitions at the Museum of Modern Art between 1967 and 1979.

Reviewing her life through these mementos led to the Autobiography series. In Autobiography: Africa (Red Frog II) the unstretched canvas no longer conforms to right angles. She cut along arcing swaths and stitched them back together to create an ovoid shape. Influenced by textiles seen on a trip to Africa, Pindell amped up color. Here, bright blue hatch marks are painted over a field of red-orange. A small photograph affixed to the surface is a fragment of memory, retrieved.

Pindell’s drawings and painting exemplify the very best of painterly abstraction. Though occasionally described as minimalist, her work rests more comfortably in the feminist practice of celebrating the hand through cutting, stitching and repetition. The power in Pindell’s painting comes from her tenacious ability to transform rage against racism into works of captivating calm and beauty.

Her art has served to salve that anger. “The sheer pleasure of mixing the values and colors,” she says, “as well as unifying the image, brought me to a kind of serenity that I had experienced in deep meditation.”