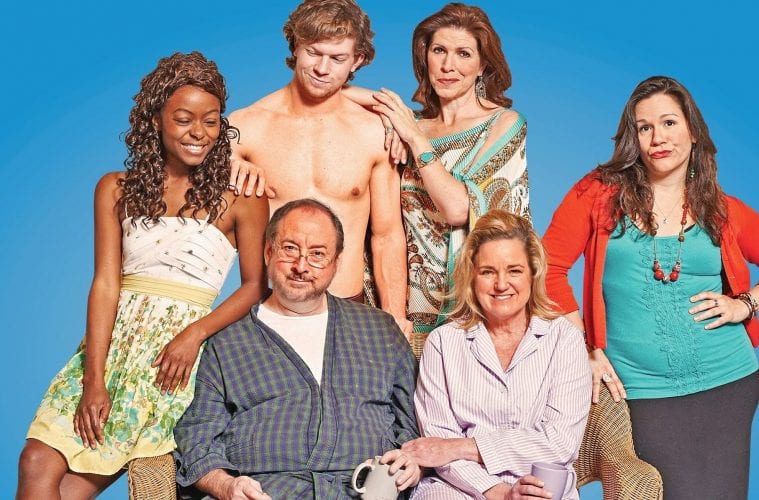 Review: Horizon’s “Vanya and Sonia and Masha and Spike” is one of the season’s best treats anya and Sonia and Masha and Spike lives up to the reputation of its Broadway run.

Virtue of being the Tony Award darling of 2013 — winner of the Best Play award — Vanya and Sonia and Masha and Spike has the distinction of being the most-staged production of the current regional theater season. It’s easy to see why so many playhouses have leapt to mount it. It’s a play worthy of its hype.

Now running through June 28 in an exceptional production at Horizon Theatre (and then again at Aurora Theatre in the fall), playwright Christopher Durang’s work succeeds on numerous levels — a tribute of sorts to the kind of work Anton Chekhov made famous; a family drama in its own right; and an absurdist comedy.

At a farmhouse in Bucks County, Pennsylvania, siblings Vanya (Bill Murphey) and Sonia (LaLa Cochran) are up early, stuck in their familiar morning rituals. The act of pouring Vanya’s coffee is a treat for Sonia. At least, most mornings it is — on this day she is bemoaning her life. Both Vanya, who is gay, and Sonia have quiet lives mostly devoted to each other.

Their sister Masha (Tess Malis Kincaid) is a name actress who supports them and owns the house they are living in, meaning they have never had to work. (Their parents were theater enthusiasts who named their clan after Chekhov characters.)

She appears one morning with Spike (Edward McCreary), an actor who almost got cast in a sequel to Entourage, to attend a costume party next door. Her path crosses that of housekeeper Cassandra (Denise Arribas), a psychic who senses something is about to happen, and Nina (Danielle Deadwyler), who is visiting her family nearby and is drawn to Spike and the prospect of meeting Masha.

They may rarely see each other, but the two sisters bring out the worst in each other’s insecurities and competitive juices. It also doesn’t bode well that Masha nonchalantly drops the bombshell that she wants to sell the house.

Directed wonderfully by Justin Anderson, this is a first-rate production of a clever, engaging show. Those familiar with Chekhov will have the best time. There is much to savor from the names of the siblings to the fact that a cherry orchard (whether it’s an actual orchard or not is debatable amongst the three) sits outside their home.

Yet this isn’t a stuffy, inaccessible work. It’s quite funny, with sparkling dialogue and some spirited physical comedy. How Maggie Smith works into the equation is best appreciated with no spoilers.

That said, as smooth and enjoyable as Act I is, I kept worrying that the show might be a bit overrated and a little too self-involved. Boy was I wrong — Act II defiantly snubs out that theory. It’s when the material hits its stride and all comes together.

The whole cast is commendable. McCreary perfectly conveys the slightly dim, hunky Spike — his abs are almost a co-star onto themselves — while Deadwyler, an actress popping up everywhere, and Arribas bring life to their supporting roles.

Yet the three main performers are the real treat. Kincaid has the splashiest role and almost dominates the first half. She captures the self-absorbed side of Masha, but also shows us a woman who has her own issues.

Murphey and Cochran ground this, however. Cochran is a terrific comic actress, but her best scene is a call from a suitor where her face registers emotions she has long suppressed.

While he may seem like the straight man, Murphey’s Vanya is fascinating. The actor has a beautifully written and delivered speech at the end, barking at Spike and extolling the virtues of old-fashioned life. Beginning comically and subtly gaining more depth, it could be the finest 15 or so minutes of Atlanta theater this season.

Working off another fine, dimensioned set by sisters Moriah Curley-Clay and Isabel Curley-Clay full of distinct touches — a theater playbill hanging in the hall; games throughout the house — Anderson and the cast make this one not to miss. In a season already full of top-notch plays such as Silent Sky, Edward Foote and Blues for an Alabama Sky, this is another golden addition.