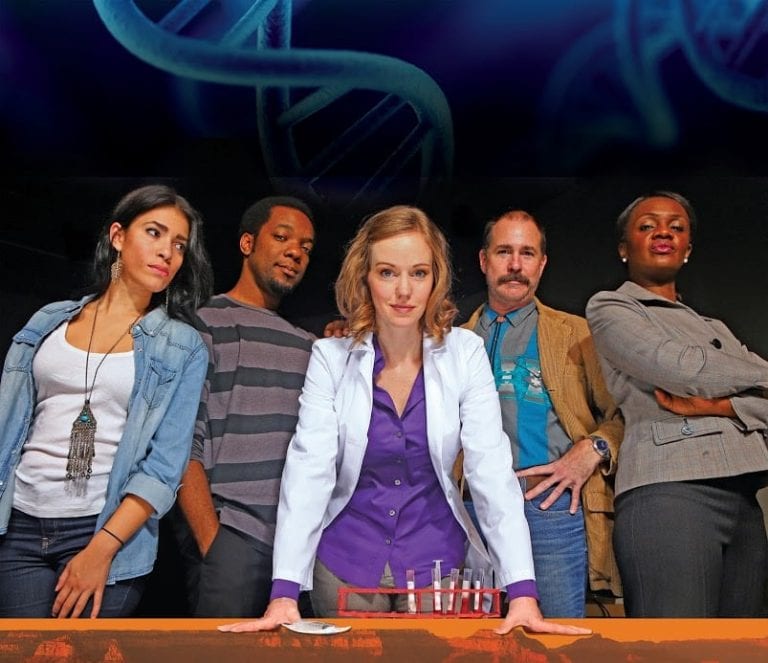 Informed Consent delves into DNA, white privilege and the power of love.

Review: Horizon’s “Informed Consent” takes on the challenges of belief, science and love

All human DNA is 99.9 percent the same. It’s the 0.1 percent that makes everyone unique. For genetic anthropologist Jillian (Bethany Anne Lind), her DNA contains a mutation that causes early-onset Alzheimer’s — the same mutation that caused her mother to forget her own name before age 40.

Now married to Graham (Neal A. Ghant), with a daughter of her own, Jillian wants to find a cure for Alzheimer’s so that she can save her daughter from inheriting the disease. In the middle of research, Jillian’s coworker Ken (Carey Curtis Smith) calls on her to conduct genomic testing on the Grand Canyon’s Havasupai tribe because they have a 50 percent rate of diabetes, perhaps because of a genetic mutation.

Serving as her guide into the tribe’s culture is Arella (Diany Rodriguez), who also has a 4–year–old daughter. The Havasupai see their blood as sacred and hesitate submitting it to science, but Arella eventually convinces them. That’s when Jillian takes the blood to use for other types of research..

Deborah Zoe Laufer’s Informed Consent, directed by Lisa Adler, is onstage at Horizon Theatre through November 8. It’s based on real events between Arizona State University researchers and the Havasupai,

The drama features an ensemble cast of Atlanta theater standouts, who are fully committed to this murky material. Lind as Jillian captures the essence of an emotionally distant scientist and an emotionally desperate mother. Ghant is always solid, but there seems to be little romantic chemistry between him and Lind.

Jackson and Smith play multiple characters, including Jillian’s mother and a housewife who’s skeptical about genetic testing, with satisfying depth. And Rodriguez delightfully renders Arella with humor, dignity and grace.

Isabel and Moriah Curley-Clay’s beautiful and imaginative set doubles as a science lab and the bottom of the Grand Canyon. The stacked reddish-brown rocks nearly reach the ceiling in the small theater space, and cut out of them are backlit stairs that double as drawers and file cabinets. Background projections provide a double helix and indicate other locations, including Jillian’s home, a bookstore and lecture hall.

Laufer’s complex piece, which pits belief against science, is intriguing as well as entertaining, but some parts don’t quite work despite Adler’s mostly successful efforts to make the script funny and digestible.

There’s so much material to explore in the script. Laufer delves into the conflict between science and belief, scientific testing on people of color, genetics, and memory and identity, which makes for a dense drama that touches on a lot of things but doesn’t fully extrapolate any of them.

The drama is framed as taking place in Jillian’s memory, which interrupts the more interesting story of how Jillian is willing to use Arella’s daughter to save her own, and how her ambition is creating a wedge between her and the daughter she wants to protect.

Laufer also tries to connect the Jillian’s motivation to find an Alzheimer’s cure to collecting the Havasupai’s blood, making this feel like two shows in one.

Jillian repeatedly says that we are all cousins because DNA makes us more alike than different. What Laufer gets at, however, but does not fully unpack, is that what everyone does have in common is freedom of choice.

Jillian is a white, educated scientist with the luxury of relying on Western medicine. The Havasupai are impoverished, oppressed and dying, and all they have to hold onto are their stories, which Jillian’s auxiliary research contradicts.

Laufer does effectively get at the idea of questioning differences as a form of white privilege. People of color do not have the same history of poking and prodding at white people the way that white people do to everyone else. In that vein, white people haven’t had to bear the history of systematic oppression.

Arella tells Jillian at one point: “You take away our livelihood, and then mock us for eating the food that you ship in.” This scene is poignant and heart-wrenching, because the conflict between identity stories and scientific evidence peaks.

At its core, Informed Consent is about two women who want what’s best for their daughters, and Jillian learns a hard lesson.

Horizon’s staging of the drama, which just finished its off-Broadway run, is solid, given Laufer’s sardined script. The piece doesn’t make for a fun, relaxing night at the theater, but it’s certainly one that will occupy many post-show coffee-shop conversations.