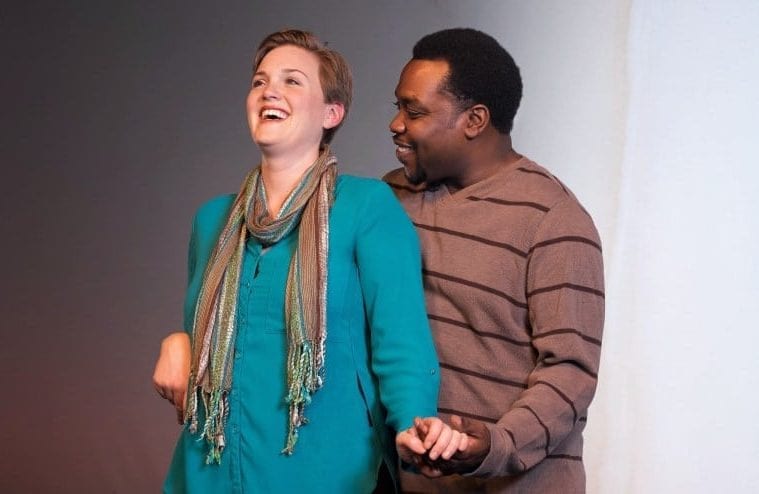 Review: “Constellations” shines bright in places, but ultimately gets lost in its gimmick

Cramming more into its tiny frame than most plays ever dream of, Nick Payne’s Constellations is a heady show that explores parallel universes and themes such as choice and chance. It’s undeniably a thought-provoking night of theater, yet it’s not a work that is altogether satisfying or as deep as it thinks it is.

Opening the 33rd season at Horizon Theatre and running through February 26, Constellations has brains in spades — but not much in the way of heart. It begins with a meet-cute between its two characters at the home of a friend, and tracks their on and off relationship over the years.

Roland (Enoch King) is an English beekeeper who can tell strangers every minute detail about the creatures he works with, while Marianne (Bethany Irby) researches cosmology at Cambridge University. They seem like opposites, but an attraction develops. After some time, Marianne tells Roland her string theory, which posits that several unique version of ourselves exist out there, affected by actions we take and choose. One isolated moment or action can change the course of a person’s reality. In one reality of the courtship between Roland and Marianne, they break up because she is having an affair, and in another he’s the one seeing someone else. The zigzagging between their multiverses goes back and forth, eventually involving an illness one acquires.

Payne is one of the most prolific young playwrights around, and this is one of his more recent works. Originating in London in 2012, Constellations made its way to the U.S. in 2015. Its Broadway run featured two heavyweights, Jake Gyllenhaal and The Affair’s Ruth Wilson. It’s very much an actors’ play, in which two performers are required to do some major lifting. There isn’t a moment when the two aren’t on stage. King is particularly compelling as Roland, especially as he courts Marianne and attempts to impress her, even reading one of her papers. His naturalistic approach here works.

Irby, a former local theater presence who recently moved back to the area, has some choice moments navigating the material, but often she feels forced and exaggerated in her movements and expressions. It throws off some scenes. Yet she and King do have chemistry together.

Director Justin Anderson had a noteworthy 2016, directing two musicals at Aurora Theatre — Into the Woods and In the Heights — and the political drama The City of Conversation at Horizon, all among my faves of the season. He can veer from a splashy musical to a small character drama effortlessly. Anderson brings out a lot in the actors here, but eventually there’s only so much he can do. The actors play out a scene, the lights flicker, there’s a music cue — and then it’s repeated. Sometimes it’s interesting to see the subtle alterations from scene to scene, and how one moment effects another. The production becomes somewhat mechanical, though, and wearying, even at an intermission-less 80 minutes. Despite Payne’s undeniable way with dialogue, this is far from a new concept — the musical If/Then, in which Idina Menzel lived in alternate universes in New York, also dealt with the scenario.

Isabel and Moriah Curley-Clay have given the show a minimal set, with a circular stage and sparkly streamers hanging from the sky. It has a very cosmic, appropriate touch. Yet overall the play still feels like more of a concept than a fully developed drama, one with all sorts of dangling, juicy ideas but not much pay-off.

In the end, I admired the production and what it tried to do, as well as the work of King, Irby and Anderson. The play never grabbed me, however. Following the theme of the show, I must admit that I found myself wishing that another version of myself in an alternate universe was back at the Alliance Theatre, enjoying Janece Shaffer and Kristian Bush’s Troubadour again.