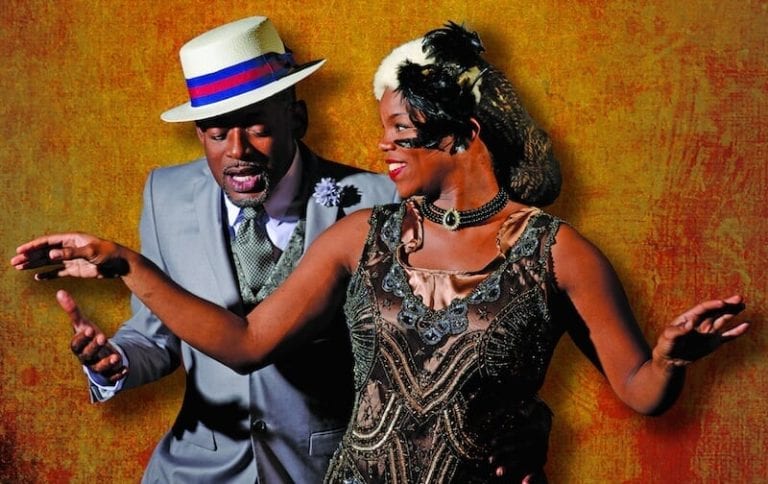 Blackberry Daze is slated for film next year. (Photo by Gregg Mooney/Horizon Theatre.)

A lot of people want Herman Camm dead, and no one can really blame them. This devil in a three-piece suit slides into Mae Lou’s bedroom just after her beloved husband dies. But, he also has his eyes on Mae Lou’s teenage daughter Carrie, who has her heart set on marrying Simon when he returns from the Negro Leagues. As if sniffing at the skirts of two women isn’t enough, Herman is having an affair with juke joint singer Pearl, whose raging husband recently returned from World War I. Based on the novel Blackberry Days of Summer by Atlanta-based author Ruth P. Watson, the musical Blackberry Daze is onstage at Horizon Theatre through August 27.

Watson grew up in Lynchburg, Virginia, and the play is set in rural Virginia and the D.C. area known as Black Broadway. Her novel was published in 2012 and is available for purchase at the theater. The musical adaptation premiered at MetroStage in D.C. in October of 2016, and a film adaptation is slated for next year.

Horizon favorite Thomas W. Jones II, who cowrote the libretto, returns for another summer to helm this cast of powerhouse singers. The cast really has fun with William Knowles’ impressive, jazzy, bluesy score, and musical director S. Renee Clark ensures that their voices bust the seams of the small space.

The show has a clunky start, and even with stellar vocals, the big group musical numbers never take off in the same way as the duets and solos. They confuse the story line and shift focus away from what is otherwise an entertaining whodunit show. But with powerful numbers such as “Palm of God” and “Take It Back” and fun ones like “Layin’ It,” even when the show stumbles, it soars.

Blackberry Daze is a highly stylized musical in the realm of Ain’t Misbehavin’, where there are few spoken lines and the cast narrates the action. However, that does not render the plot thin, and in between the gospel numbers and raunchy jazz tunes, is a story about women who are in a tug-of-war with yearning and desire. All of them are trying to escape abusive relationships and figure out what freedom looks like for them as black women less than 60 years after emancipation. At first, Herman seems like the perfect escape, but he proves to be too hot to handle.

TC Carson, who starred alongside Queen Latifah in the ’90s sitcom Living Single, reprises his role as Herman, and his vibrato is worth the ticket in itself. Ayana Reed, who played the role of Carrie in D.C., also returns in this production and delivers this teenage girl, who is holding onto a gut-wrenching secret, with emotional depth beyond her years.

Also worth mentioning are Brittany Inge as Pearl, who Atlanta audiences recently saw in Father Comes Home From the Wars at Actor’s Express, and Horizon favorite, Christy Clark (Cowgirls, Madeline’s Christmas), who has the opportunity to show off her vocal and acting range in this production. Rounding out this talented ensemble cast are Naomi Lavette as Mae Lou and Christian Magby, who portrays Willie and Simon.

The action is set against a simple set designed by Isabel and Moriah Curley-Clay that is anchored by a jagged tree made up of 2x4s, and accented by mason jar lights. Clark and guitar player Spencer Bean get in on the action, as well, with their stage right set-up as the juke joint musicians. Kudos go to Robbie Hayes, whose vivid projections serve to move the plot forward and bring the simple set to life. Costume designer Nyrobi Ross also does a nice job with Herman’s suits and Pearl’s beaded dresses.

Blackberry Daze is one of the better musicals that Horizon Theatre has produced. Jones really nails it with a creative representation of movement through time and space, as well as the use of a piece of white fabric that comes to symbolize everything from a kitchen table to the literal ties that bind two people. Blackberry Daze is a new musical with a vintage flavor, and the cast and creative team squeeze every bit of the juice.