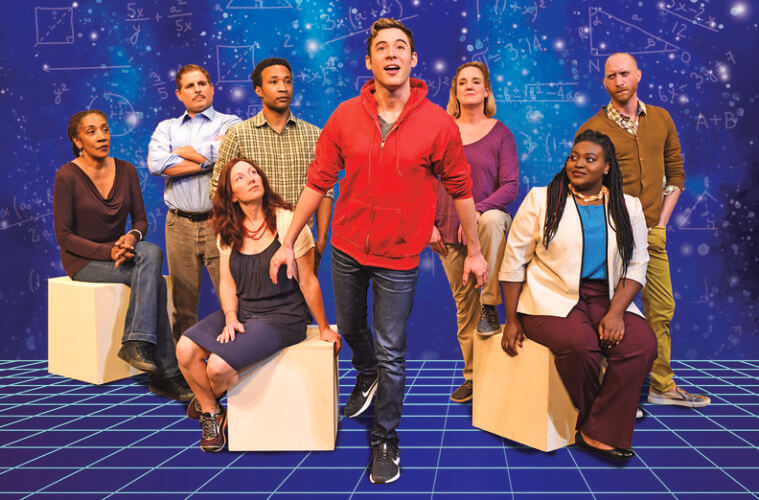 Fifteen-year-old Christopher Boone loves prime numbers, his pet rat and the color red. He dislikes anything yellow, metaphors and being touched. His behaviors are consistent with someone on the autism spectrum, but when he finds a pitchfork sticking out of his neighbor’s dog, he stretches the bounds of what he (and everyone around him) thinks he can do.

Mark Haddon’s bestselling novel, The Curious Incident of the Dog in the Night-Time, gets the stage treatment at Horizon Theatre through October 27. The show is a coproduction with Aurora Theatre, which will stage it in Lawrenceville from January 9 to February 9, 2020. Horizon’s Lisa Adler and Aurora’s Justin Anderson codirect this magical production. As the autistic Christopher, Brandon Michael Mayes tries to solve the mystery of a neighborhood dog’s murder.

The stage adaptation was first produced at London’s National Theatre in 2012 and went on to win seven Olivier Awards and five Tony Awards, including best play (2015). Adler and Anderson do a wonderful job of congealing their visions to create one of the more unique productions I’ve seen on an Atlanta stage.

For devotees of the book, the basic premise is intact. After Christopher (Brandon Michael Mayes) finds the dog, he becomes his own Sherlock Holmes and investigates the case. He shares the details with his sensitive, good-humored counselor (Candy McLellan) in weekly sessions. Hanging in the background of this murder mystery is the implosion of his parents’ marriage and adults who keep countless secrets.

Mayes is new to Atlanta theater and makes one heck of a first impression. You can see the sweat dripping from his clothes as he bounds through every scene. Watching him twist, jerk and contort his body as Christopher struggles is arresting. He renders the teen so vividly and with such dignity, there may well be a Suzi Bass Award nomination in his future.

As his counselor Siobhan, McLellan conveys a welcome sense of warmth and maturity that’s atypical of most of her comedic roles. Christopher Hampton and Megan Dominy as the parents show the strain that raising a child with special needs puts on a marriage. The tension between them is high, and they play tug-of-war with Christopher. If anything, it would help if they explored emotions beyond exasperation. The company. The stage adaptation of Mark Haddon’s bestselling novel was first produced at London’s National Theatre in 2012 and went on to win seven Olivier Awards and five Tony Awards, including best play (2015).

This is a physically demanding show for the entire eight-person cast, which includes such familiar faces as Lala Cochran, Jimi Kocina and Brian Kurlander. Almost everyone in the ensemble triples in roles, serving as busy passersby or next-door neighbors. They also use their bodies to create couch cushions, ticket machines and flying objects. In one scene, as Christopher remembers a day at the beach with his mom, they use blue umbrellas to mimic ocean waves.

The set is a blank canvas with a few blocks on blue-black floors and white walls with hidden doors. Milton Cordero’s projections enliven the space, and he does a marvelous job of taking us inside Christopher’s mind. The projections not only convey various settings — neighborhood, school, the Tube — but also the scribblings in Christopher’s notebook. Math equations and maps appear across the walls in real time as Christopher tries to solve the mystery of who killed the dog named Wellington.

The shortcomings here, if they are that, are moments that become too intense. In trying to sincerely convey the experience of someone living with autism, the creative team loses some of the humor and innocence that make the novel so enjoyable. It also starts to drag a bit toward the middle of its 2.5-hour runtime, but fret not, it bounces back.

The Curious Incident of the Dog in the Night-Time is a stirring piece of theater that sticks long after the curtain closes. It so brilliantly conveys the sensory overload that people on the autism spectrum experience that it’s hard not to feel sympathetic. But, more than sympathy, Christopher shows that the extraordinary can live in anyone — we just need to find our right angles.