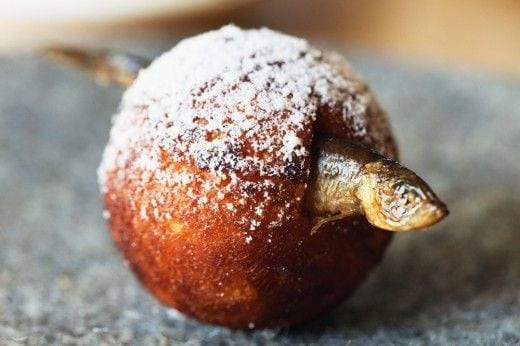 The head of a tiny smoked fish protrudes from a ball-shaped traditional Danish pastry known as aebleskive. A signature dish of the innovative Copenhagen restaurant Noma, the shriveled, snaky-looking creature suggests Cleopatra’s asp poised to strike, or some prehistoric fossil plucked from the depths of earth or sea.

This photograph of culinary weirdness is the handiwork of Todd Selby, the hipster documentary blogger who recently set out to capture some of the more rarefied, exotic and cerebral foodie practitioners on the planet. In “Edible Selby,” due out from Abrams in October, he presents 296 gorgeous pages of magazine-style photographs of mad gastronomic geniuses and the fruits of their labors. Twenty of the images are on view through November 17 at Jackson Fine Art, which was the first American gallery to show prints from his book “The Selby Is in Your Place,” his portraits of creative people in their curiosity-filled habitats.

Alas, you are likely to have a fuller experience thumbing through — or devouring — the book than browsing Jackson’s installation, which gobbles up seven of its 20 slots with essays on but two places: Noma, a Scandanavian temple of haute cuisine where you may dine on snails in vases of nasturtiums with edible twigs, and Captains of Industry, a Melbourne, Australia, emporium where patrons quaff house-made ginger beer and locally roasted coffee. The curatorial sensibility seems to wander from the food, pairing, say, an architectural shot of Captains’ black-brick exterior with a print of a man in a barber’s chair. We get it. These dudes of sartorial cool will stitch you a pair of kangaroo shoes and give you a shave and a cut. But where’s the knuckle sandwich and the slow-cooked pork? Where’s the beef?

Nor will Atlanta gallery-goers see the sea-swept Mallorcan paella perch Sa Foradada, the astonishing baroque pastries of Paris’ Du Pain et des Idées, or Selby’s fascinating studies of the Phoenix Collection, where a California couple makes “pu-erh” teas in what looks like an Asian incarnation of Dante’s Down the Hatch on Peachtree Road. (Their Kyoto-style garden contains a concrete boat and, as Selby writes, “a composting toilet in a tower surrounded by a moat.”) We do get a frigid photo of Tokyo’s famed tuna auction at Tsukiji Market; a fabulous still life of beef, pickled vegetables, chives, brown butter and crunchy anchovies from Le Chateaubriand in Paris; Rockaway Taco’s herb shed in Queens (again, where’s the food?); and a remarkable picture of Yoshida Farm’s ballonlike bags of caciocavallo cheese, which look like plump ivory gourds hanging from the ceiling. That you can find Japanese farmers crafting French- and Italian-style cheeses from Brown Swiss cows is glorious evidence of the absurdity and cultish diligence to be found on the epicurean map. Finally, the 50-by-70-inch photograph of San Francisco gourmand Angelo Garro in a kitchen that includes a metal forge, a barbecue pit and a greenhouse with a fig tree brings to mind Peter Greenaway’s louche, painterly 1989 film “The Cook, the Thief, His Wife and Her Lover.”

Not all that long ago, intrepid shooters dispatched pictures from far-off places rendered in crisp black and white, without frills and comments. Selby, a young artist who worked for magazines and found fame in the blogosphere before he had any thought of selling prints, provides charmingly illustrated interviews with his subjects in which he asks them to supply recipes, drawings and whatnot. The book also includes stickers of his whimsical drawings and a few “home-style” recipes of his design. "Angelo Garro in His Kitchen at Renaissance Forge, 2010"

Jackson has placed some of Selby’s annotations and drawings on its walls to help decipher the photos, lending an almost kindergarten air to the gallery. Truth is, the work here isn’t any better than you’d find in Saveur magazine or Oof Verschuren’s photographs for the books of Yvette van Boven, “Home Made” and “Home Made: Winter,” which also happen to contain fanciful drawings.

But in his omnivorous quest to find the revolutionary foragers, scavengers, olive fetishists and rooftop farmers of today’s food-obsessed culture, Selby cooks up a quirky, complex stew. For those who would dismiss the culinary arts as fashionable ephemera — fresh today, stale tomorrow — he offers a fat defense to the contrary, a feast for the eyes that is by turns briny, bitter, sweet, earthy, precious and pungent.