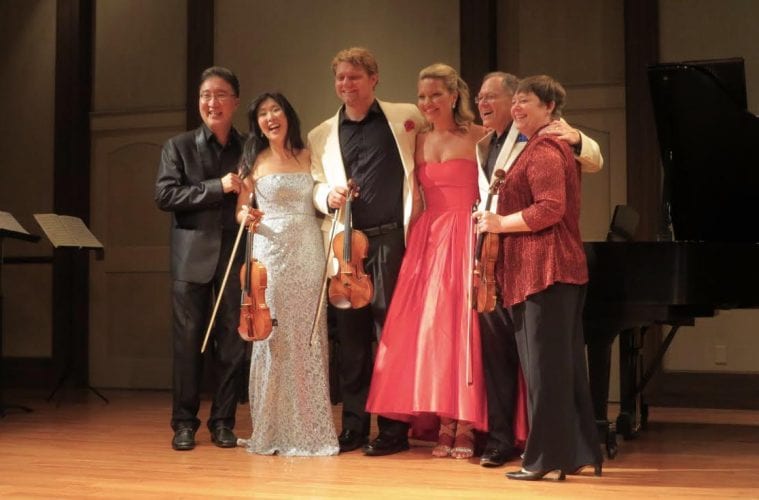 With a cool mountain environment and summer temperatures averaging about 10 degrees lower than Atlanta, the bustling and artsy tourist town of Highlands, North Carolina (and its near neighbor Cashiers) play host annually to Highlands-Cashiers Chamber Music Festival, now in its 37th season, which runs through August 12.

Only 125 miles from midtown Atlanta, 15 miles by winding mountain road from Dillard, the festival combines appearances by some of Atlanta’s finest musicians with nationally and internationally known performers, and kicked off its 2018 series of offerings Friday with Sibling Rivalry — Triple Threat, a concert that featured three pairs of brother-and-sister violin and piano duos: Kate Ransom and William Ransom, Helen Hwaya Kim and Michael Kim, and David Coucheron and Julie Coucheron.

The delightful program anchored its theme less in putative rivalry than in the joy of collaboration among grown-up siblings who have made their marks in classical music. The opening half presented the performers in sibling violin duo pairs, opening with Kate and William Ransom performing “From the Homeland” (Czech: “Z domoviny”) by Bedrich Smetana, a pair of compositions the composer intended as “written in a simple style, with a view to being performed in the home rather than at concerts.” The pieces are redolent in Czech national character, but with original melodies rather than borrowed folk tunes. Kate Ransom’s attractively warm violin playing brought out the music’s Czech flavors underpinned by brother William’s piano.

Violinist Helen Hwaya Kim and pianist Michael Kim, who is director of the School of Music at University of Minnesota, delivered a work with a contrasting national spirit, the “Suite populare espagnole” by Manuel de Falla, settings of six folk songs of diverse Spanish provenance arranged for violin and piano, drawn from his “Siete canciones populares españolas” for soprano and piano. Most curiously, the opening song “El Paño Mortundo” contains seven bars that sound like the third phrase of “Three Blind Mice” — surely a complete coincidence, though hard for even the layman to not notice. That oddity aside, the Kim’s performance vividly evoked the music’s rich Iberian imagery.

The expository first half of the concert concluded with David and Julie Coucheron performing a virtuosic showpiece that brought the house down, Franz Waxman’s “Carmen Fantasie,” based on music from the opera Carmen by Georges Bizet. Not to be confused with another, much earlier “Carmen Fantasie” by violinist Pablo de Sarasate, Waxman’s is by far the better of the two. In popular culture, Waxman is famous for his over 150 film scores, including The Bride of Frankenstein (1935) and Alfred Hitchcock’s 1954 thriller Rear Window, but “Carmen Fantasie” remains his most popular concert work. This performance by the Coucherons sizzled with virtuosity and emotion, bringing the program’s first half to a thrilling close.

In terms of impact, it could have easily ended with that, but the program’s theme begged for exploring more combinations of performers after intermission. First, presenting all of the violinists together by themselves was “Cappricio for Three Violins” by Friedrich Hermann, a minor but prolific 19th-century composer best known as an editor of violin works published by the Peters Edition. It was a pleasant enough work, its slow introduction showing influences from Bach, and the ensuing flighty fast section a clear nod in many ways to Mendelssohn.

Then came the more unusual task of having three pianists perform together, but something for which the festival’s artistic director, William Ransom, comes well prepared with repertoire. A pair of pieces, “Valse and Romance” by Serge Rachmaninoff, perhaps the best known work for one piano, six hands, led the way, with Julie Coucheron seated between the gentlemen, Kim and Ransom.

That configuration was clearly a setup for the next piece, the humorous “Das Dreyblatt” by Wilhelm Friedemann Bach (“Threesome”), which was intended to be played by a male pianist seated between two petite female pianists, reaching around both to play the outer parts — somewhat bordering on risqué in the composer’s day. That’s how the novelty piece has been presented in at least two Atlanta concerts in the past, with Ransom in the middle. In this instance, the gender roles were reversed, with a woman between two men, which made it a little funnier and less lascivious in today’s #MeToo climate.

The culmination of the theme, then, would be to have all six performers play in one final work, which was solved by cleverly adapting Moritz Moszkowski’s Suite in G minor, Op. 71 for two violins and piano by marking up the score so that the performers are all involved in a kind of round-robin approach to the suite’s four movements — something never seen before in this reviewer’s memory. The first was taken by David Coucheron and the Kims; for the second, Helen Kim moved over to play the first violin part, joined by Kate Ransom and Julie Coucheron; then Ransom took up the first violin part with brother William at the piano, with David Coucheron playing the second violin part.

For the final “Molto vivace” movement, all three violinists played, with the two violin parts astutely divided between them, and Michael Kim as pianist until the music’s home stretch when he was joined first by Julie Coucheron, then in the final few measures by William Ransom also, allowing all six performers to happily participate in the concert’s final jubilant notes.