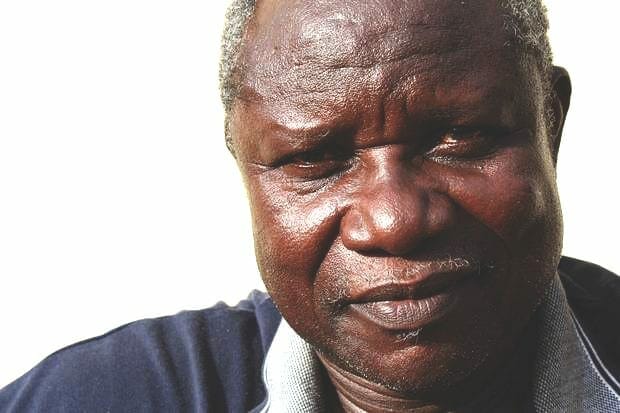 "Paa Joe: Gates of No Return," an exhibit of fantasy coffins by Ghanaian artist Joseph Tetteh-Ashong, aka Paa Joe, continues at the High Museum through August 16. Its original run was delayed by Covid-19 closures. (Courtesy of Benjamin Wigley)

Editor’s note: This review was written after the writer experienced the “Paa Joe: Gates of No Return” exhibition virtually in the early weeks of the Covid-19 pandemic. It’s scheduled to run through August 16.

The High Museum of Art reopens to the public Saturday with three shows, including Paa Joe: Gates of No Return, a traveling exhibition of fantasy coffins by Ghanaian artist and master craftsman Joseph Tetteh–Ashong. The 73–year-old is widely known as Paa Joe. A fantasy coffin, or abeduu adeka, is a figurative object created to honor a new ancestor as they transcend to the spiritual realm. The tradition began in mid-20th century Ghana and has since become a common funerary practice and revered international art form. It’s not uncommon for these works to be presented in museum spaces, but the High unsuccessfully tries to bridge these fantasy coffins with the lived experiences of the trans-Atlantic slave trade.

This fantasy coffin depicts the Christiansborg Castle in Accra, the capital of Ghana. The coffins are large enough to fit a human body. (Courtesy of Peabody Essex Museum)

This show features seven of 13 coffins commissioned by Canadian artist and collector Claude Simard in 2004. The large-scale sculptures are architectural models of European forts and castles from West Africa’s Gold Coast. The history of these structures, which still stand today, began with European intrusion and the ultimate dominance of Gold Coast nations. The sites often are regarded as “gates of no return” because they were where captured Africans were held captive, brutalized and then shipped to the Americas to be enslaved. The exhibition features models of Cape Coast Castle, built by the Portuguese in 1610; the Christiansborg (Osu) Castle, built by the Danes in 1652; and several others found on the Ghana coast today. It also premieres a short film titled In My Bones by Ghanaian curator and filmmaker Nana Oforiatta Ayim.

These works were not created to act as coffins; they are meant to be understood as vessels that hold the immense histories layered upon them. They’re large-scale works, built to be able to hold a human body. Viewers can get a sense of their enormity and see the meticulous detail put into emulating architectural features that could only come from firsthand experience. Each brightly colored model draws the eyes to several points of interest — the wide courtyards, the tiled roofs and the height of the unscalable walls, for example.

Paa Joe clearly labels the infamous portals — the gates of no return — in each, so viewers can better conceive of the very spot where captured Africans began their American journey. On the walls of the galleries are the names of 730 Africans that survived the trip across the Atlantic and were enslaved in the Americas, including the American Southeast. These names are paired with a eulogy to the enslaved that denounces the inhumanity of the trade and injustice.

Paa Joe’s master craftsmanship is undeniable, but his works are placed out of context. The fantasy coffins become trivialized as points of entry to discussions of the trans-Atlantic slave trade while simultaneously memorializing its history and reinscribing trauma on those most afflicted by it.

The High misses a golden opportunity to participate in an international conversation on the destruction of artifacts of colonization and the edifices of white supremacy. Instead, its exhibition attempts to pander to the descendants of enslaved Black people through subject matter, and then confronts them by humanizing objects honoring one of the most traumatic occurrences in history. There could be conversations on solutions and possibilities for the structures that still stand today, but this exhibition focuses on the human cost of the slave trade in a way that doesn’t correlate with, or build upon, the history or intent of the art objects. 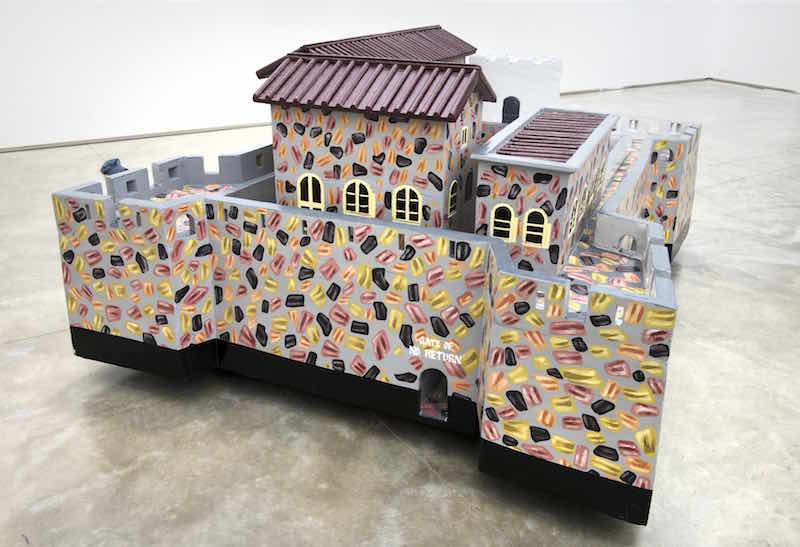 Detail of a coffin depicting Fort Gross-Friedrichsburg-Princes Town. It’s made of emele wood and enamel.

Fantasy coffins, much like most West African craft works found in Western museums, are not solely for aesthetic purposes. They’re meant to be used and performed. The unrealized potential of this artwork is its ability to illuminate transnational histories and provide an opportunity for restitution and healing through ritual.

Each structure teaches viewers that the Gold Coast has a history beyond slavery. Ghana was colonized by the English and secured independence in 1957. Each fort and castle lived several lives beyond European occupation, often functioning as government buildings and post offices, if not completely abandoned. This reveals the complex relationship that nations have with reconciling their histories and could be placed in a fruitful conversation with American structures like Confederate monuments and plantations, not trafficked bodies. To descendants of chattel slavery and Ghanaian Americans, these objects can be triggering, awakening traumas experienced daily and those imprinted on their DNA.

Traditionally, fantasy coffins are accessible for one day before they’re buried with the deceased. The High’s coffins were commissioned for the art market and are now intended to be gifted to museums, where they’ll continue to be preserved, protected and discussed out of context. The ritual of burying these “slave castles” would provide a symbolic end to the real structures that continue to oppress the descendants of the enslaved. That symbolic gesture, akin to the desire to destroy Confederate monuments, might inspire the real destruction of these artifacts and offer healing to those living in the wounds of the past.

These coffins give viewers an incomplete ritual, one stifled by the fact that they’re still above ground. Much like a Yoruba Egungun behind glass, these works are displayed to communicate fragmented knowledge. If the High, an art institution with its own entrenched colonial history, wanted to genuinely appeal to the African diasporic communities — specifically the descendants of trans-Atlantic slavery — they should complete the ritual and bury the dead.