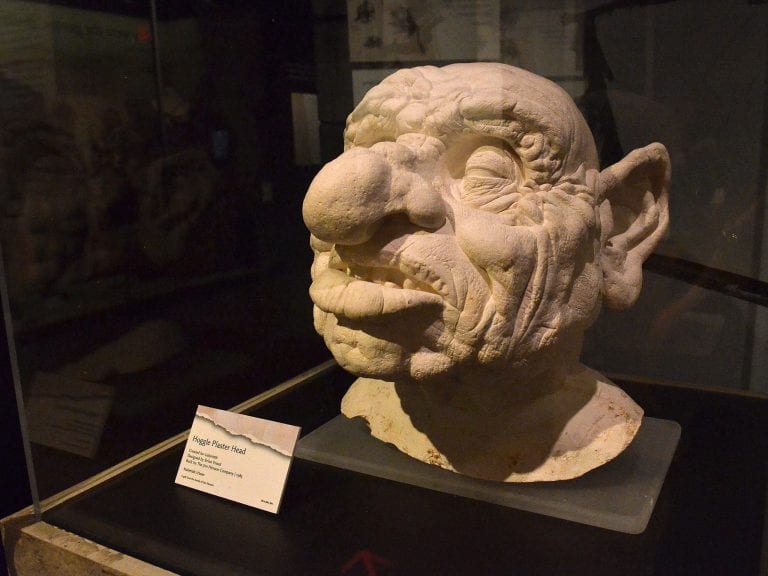 Image by Chris Hunt courtesy the Center for Puppetry Arts.

What’s most striking about the new exhibition Jim Henson’s Labyrinth: Journey to Goblin City is how even the small collection of about 50 objects reveals the incredible amount of attention that went into the creation of details, some of which were seen only briefly, if at all, in the final film. The degree of care is so exacting that a visitor to the gallery may slowly gather the strange sense that the objects themselves may actually be more interesting than the 1986 movie they were created to appear in.

Though Labyrinth has become something of a cult classic, the film had a hard time connecting with audiences on its initial release: the unconventional mishmash of puppetry paired with live actors, fiercely independent vision paired with obeisance to popular tastes, and singular originality paired with derivative cribbing from other sources seemed unpalatable to some. Reviews were mixed — influential critic Gene Siskel memorably called the film “ugly” — and at the end of its disappointing theatrical run, Labyrinth had only recouped about half of its $25 million budget. But viewers that connected to the film connected deeply. The exhibition itself, with all of its fun and fascinating detail, may finally give casual observers and non-fans a good sense as to why.

In the film, an army of goblins often ends up looking like a crowd of moderately differentiated comic baddies, but in the exhibition, early sketches, designs and a glass case of the finished puppets reveal how the creators imbued each character with an individual sense of personality, history and life. Henson’s collaborator, conceptual designer Brian Froud, who had also worked with Henson on creating the world of the better-received 1982 fantasy film The Dark Crystal, named each goblin as he sketched it, and the puppets seem to possess a remarkable sense of individuality and implied personal histories. Even goblin armor and weaponry are imbued with a vibrant sense of anthropomorphic life, and the bumpy, reptilian skin and unctuous, sparse strands of hair have a wonderful repulsive-attractive tactility, something that doesn’t come across as viscerally on film.

A display case is given over to the film’s masked ball scene, and, as with the goblins, a viewer becomes aware what incredible attention was paid to detail; the handle of a feather fan or the slightly tattered hem of a beautiful ball gown contains in miniature the scene’s overarching sense of suffocating romantic excess. Again, the degree of attention to the creation of objects that a viewer barely catches a glimpse of in the film is surprising, even somewhat baffling.

It’s worth noting that some of the best and largest Labyrinth artifacts at the Center aren’t actually in the temporary exhibition, but remain part of the permanent collection and are located across the lobby in the Jim Henson Collection wing of the museum. After seeing the Labyrinth show, hardcore fans will certainly want to make a beeline to the permanent gallery to spend some time with Sir Didymus and some of the other memorable puppets from the film. It’s a shame that all the objects weren’t placed together in one gallery, and in the end, it’s disappointing the temporary exhibition is so small, about 50 objects in a gallery about the size of an average living room, offering just a few representative objects from a film that clearly contains multitudes.

Still, it’s an exhibition that fans will gobble up; the chance to spend some time with objects from an idiosyncratic favorite is pretty rare. The objects, though few in number, offer a glimpse at the creative intensity, energy and devotion that Henson brought to his projects.