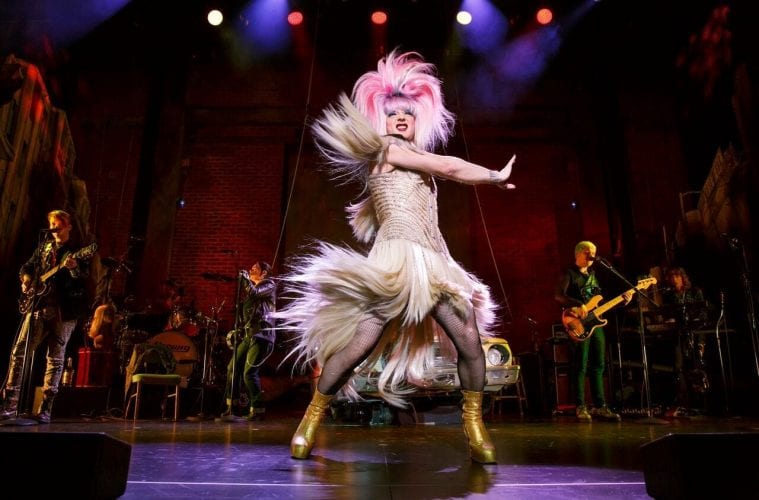 Review: “Hedwig and the Angry Inch” takes the Fox by storm with a smart, gritty rock ‘n’ roll heart

“Ladies and gentlemen, whether you like it or not . . . Hedwig.”

With those words, the character Hedwig was first unleashed onto the stage in 1998, and that introduction has remained consistent, though the venues have changed quite a bit over the years. Creator John Cameron Mitchell first performed the role at the then-crumbling Jane Hotel in Manhattan’s West Village, a location that made the show’s meta-pitch — that audience members are literally watching the glam rock act of “internationally ignored song stylist” Hedwig in a gritty dive bar — imminently believable.

The Jane and its neighborhood have gentrified since 1998, and Hedwig herself has moved on: the hit show has been produced on stages and in site-specific venues across the world, with hundreds of different actors (and actresses) taking on the role of the transgender East German rocker having a sort of confessional identity crisis on stage in a seedy rock club. Hedwig and the Angry Inch became a movie in 2001, and Atlanta’s Actor’s Express did not one but two sets of hit productions in 2003 and 2008. The show even had unpredictably huge success when produced in various cities across the Far East.

The answer, judging from the current touring version of the Broadway show starring actor Euan Morton, currently making a brief stop at Atlanta’s Fox Theatre through April 5 before moving on to San Antonio, Charlotte, Philadelphia and points distant, is a resounding yes. Thanks to the fantastic songs, a moving story and Morton’s strong performance, the show, even in an opulent, cavernous venue like the Fox, retains its gritty rock ‘n’ roll heart.

After being introduced, Hedwig (whether you like it or not) opens with the throbbing rock number “Tear Me Down,” (which I didn’t particularly like) with the volume and bass cranked up well past eleven. On opening night in Atlanta, Morton didn’t seem to warm to the venue right away, and the crowd took some time to warm to him as a performer, though things quickly improved.

Hedwig, the show’s scripted monologue tells us early on, is a sort of theatrical hermit crab, surviving by creeping into whatever shell of a venue will have her, and the current theater has supposedly just hosted the out-of-town tryouts for Hurt Locker: The Musical, which closed on opening night during intermission. (Hedwig’s band is performing on still unstruck pieces of the set). Hedwig, though unknown, has been booked there through her sheer doggedness and thanks to a recent scandal involving famous rock star Tommy Gnosis, who, we learn, is performing at an even bigger arena across town.

As the numbers progress — composer Stephen Trask’s varied rock score is consistently appealing — Hedwig tells us more of her life story. Born in East Berlin, worshipping the music on American Forces Radio (“You used to be really important,” she jibes the audience), Hedwig, born Hansel, got a sex change so she could marry an American soldier and move to the West with him. In a long stroke of bad luck, the cut-rate, quicky operation was botched, leaving her with the titular “Angry Inch,” her soldier abandoned her in a Kansas trailer park and, adding insult to injury, the wall fell not long after Hedwig sacrificed her genitalia for freedom.

What’s best here is that the script, in keeping with its site-specific, rock show concept, allows for lots of improvisation and audience interaction. Not only was Morton keenly adept and funny at this, but it’s just the thing a show like this needs to come alive and connect with an audience at a vast venue like the Fox.

Best of all, Morton’s Hedwig is a character who doesn’t take herself too seriously. The character has a sense of faulted vulnerability; her onstage breakdown and transformation are believable. In the choppy and uneven film, John Cameron Mitchell overly emphasized the character’s mythopoetic, Zenlike, all-knowing qualities, which made her seem almost impervious to the harsh things life had handed her. Here, the knowingness emerges organically, and we understand the pain and trauma Hedwig has been through.

Though Morton wasn’t in perfect voice throughout the show, he gave an appealing, emotionally seeking and vulnerable quality to songs like “Origin of Love,” “Wicked Little Town” and “Midnight Radio.” Especially fun was his performance of “Wig in a Box,” a bouncy number about performing in drag which begins plaintively but changes across several moods and eventually invites the audience to sing along, which, tellingly, many did. It’s also worth pointing out that Morton gets great support from his band and especially from performer and back-up singer Hannah Corneau in the show’s only other (barely) speaking role.

Hedwig and the Angry Inch has fantastic songs that the right performer can really sink her teeth into, and Morton certainly fits the bill. Even more importantly, the songs together tell a moving story, and if an actor is truly present in the role and making a connection with the audience, the show can come vividly alive. As a rock ‘n’ roll survivor, Hedwig goes on and performs whether her listeners like it or not, but with a strong actor in the enduring role, even in a big venue, the audience is sure to like it very much indeed.