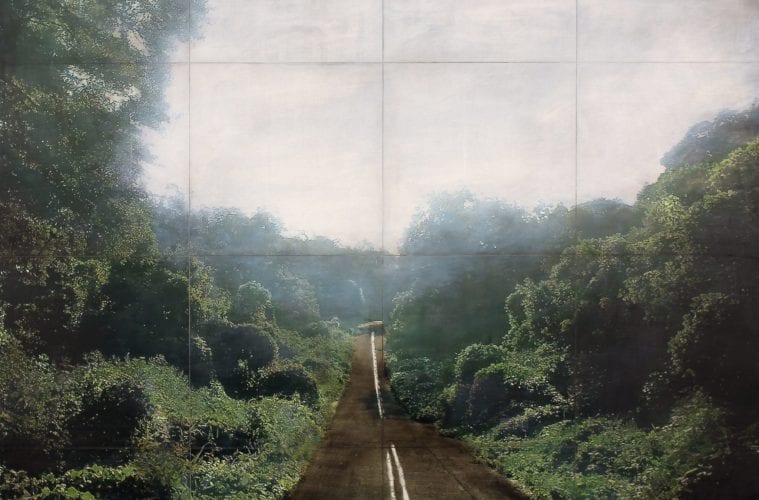 Two shows opened this November at Hathaway Gallery: Whitney Wood Bailey’s Cosmic Nostalgia, on view through January 4, and John Folsom’s Framework and View, up through February 11. Though autonomous exhibitions, both share a bond to the natural world. Bailey’s Cosmic Nostalgia consists of 17 bright abstract paintings and commands Hathaway’s white-walled galleries well. There are two primary types shown: canvases with all-over compositions and work on paper with doctored splatters. Both hark back to abstract expressionism and post-painterly abstraction, relying especially on the innovations of painters like Helen Frankenthaler, and Morris Louis, who in turn drew from Jackson Pollock, Hans Hofmann and earlier Modernists, like Surrealist André Masson. Similar to these painters of the mid-20th century, Bailey exploits paint’s inherent qualities, allowing drips and pours to dry as they fall. Indeed, what makes her work like Frankenthaler and Louis most is her control; these do not read as existentialist or highly emotive paintings like first-generation abstract expressionism. Rather they are contemplative and measured, using the fluidity of paint to do something lyrical and decorative.

All Delighted People is a large five-foot-square work on canvas in which passages of pooled and  intermingled color are interrupted by bulbous areas of paint filled with repeated hatch marks. Bailey’s “ticking” process reveals the influence of cave art that the artist observed while visiting France. Such a gesture — imposing order on loose, fluctuating form — suggests the relationship of the ancient marks to the irregular surfaces of cave walls. In Hat in a Dream, a work on paper, a concentrated area of multi-hued paint fills the middle of a white page. Bailey’s other works on paper tend to have ample negative space and stronger areas of emphasis unlike the more uniform, all-over paintings on canvas. Both reveal Bailey’s competency with saturated color and dense pattern.

The hatch-mark motif appears throughout Bailey’s work, adding visual interest as the repetitive marks play off of the looser field of paint below. In the context of Bailey’s title, Cosmic Nostalgia, the dense fields of pattern suggest the macrocosms of space but also nature on the smallest scale. In her artist’s statement, the notion of intelligent design is invoked. Her paintings, then, seem to suggest the notion that the patterns in nature reveal the presence of the divine.

Though such painting looks loose and expressive, it ultimately requires thorough understanding and control of the medium. Bailey is part of a larger, unaffiliated school of contemporary painters who work in this manner. Most use aqueous media and use additional detail to augment the loose initial layers, as if to create interest and distance from high modern predecessors. Though their content is vastly different, recent painters like Wangechi Mutu and Nina Bovasso are prominent examples. Often, especially in the case of painters like Bovasso, such work embraces the decorative — with the objective, I hope, of shaking off some of the negative and gendered associations of term. Indeed, it seems notable that many of these painters are women. Bailey’s work belongs comfortably in this school. Though it brings nothing new to the field, it is satisfying and confident painting. John Folsom’s Framework and View is a slightly smaller show of landscapes created through a synthesis of painting and photography. The subject is the area around Savannah and the National Wildlife refuge. For this series, Folsom photographed salt marshes and woods. Humanity’s mark on the landscape appears infrequently in the form of a lone road or deserted path. Yet, despite their subject, the natural world, these are overtly manipulated pictures.

Many of the landscapes feature bodies of water, such as Framework and View #3. One of the larger works, it shows a salt marsh around high tide. The water is placid and the sky above dramatic. Rosy clouds part and reveal a dark, starry sky in the upper corners as if to suggest that this is an accumulation of moments, perhaps culled from memory. There is a subtle but pervasive sense of simplification throughout the image. The picture breaks down into 25 smaller squares that form a basic grid as if to further distort it. Through the Ground Glass, a smaller print, is similarly manipulated. Kudzu-encrusted boughs of the trees form an arch through which glaring light shines so as to contrast with the tenebrous shadows of the forest’s interior. Again, framework of lines interrupts the image, though in some places thick kudzu obscures it. An “X” marks the center.

One of Folsom’s hallmark moves for Framework and View is the use of the grid. However, it does not seem to be an underlying framework that is revealed. Rather, the grid appears to exist on the surface of the image. Perhaps it echoes the grid that one can use in a camera’s lens to look through to compose a shot — both a visual aid and screen. Folsom also uses translucent passages of paint to veil and abstract the landscape. His underlying idea seems to be that the grid insists on the artifice of the images and reminds the viewer that they are unfaithful representations of the natural word. The grid has a longtime association with humans’ efforts to make sense out of things, but here it seems to act as more of a partition — that is, a barrier — a reminder of the falsity of the image within. Whether rendered by hand or photographed, pictures are subject to distortion, the whims of the viewer, or outright manipulation.

Folsom’s ideas are rich and his images serene. One question I’m left with is the subject itself: why the salt marsh and the woods? Perhaps both are places that constantly change and are rich with life. The marsh especially is bound to a daily cycle. Our memories of such places, on the other hand, are static and mute representations.